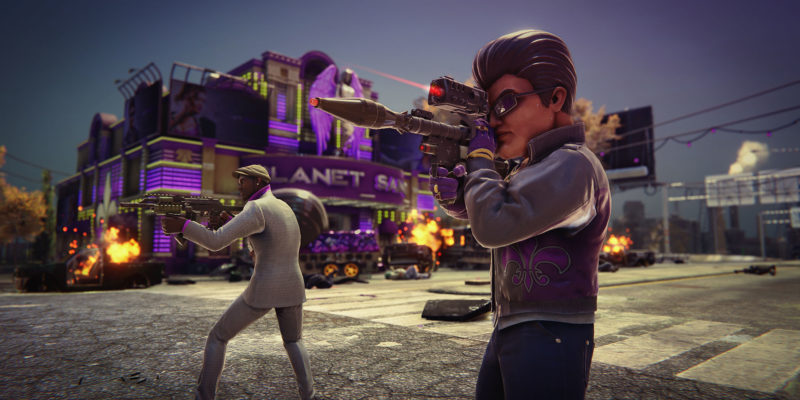 Saints Row: The Third Remastered takes an entry in the open-world adventure franchise to new systems and new rigs. It brings with it updated visuals, textures, special effects, lighting improvements, and 30 DLCs. Does it make a strong case for yet another purchase? Or is it dryer than a shiny coat of paint? Let’s find out in our official review.

Saints Row: The Third Remastered – The story so far

Having played the original and the fourth game in the series — yes, I skipped Saints Row: The Third when it originally released back in 2011 — it goes without saying that the story was never the selling point of the franchise. Still, if we’re going to delve into the campaign, then it’s all about our favorite crew taking on the Syndicate and their cohorts for control of Steelport. That’s about it.

However, though the overall arc might be shallow, Saints Row: The Third Remastered more than makes up for it with crazy shenanigans and crass humor that reaches all-new levels of ridiculousness. You know you can ignore the narrative once you’ve seen masked luchador gangsters, evil strippers, over-the-top villains, insane stunts, and sex toys being turned into weapons. 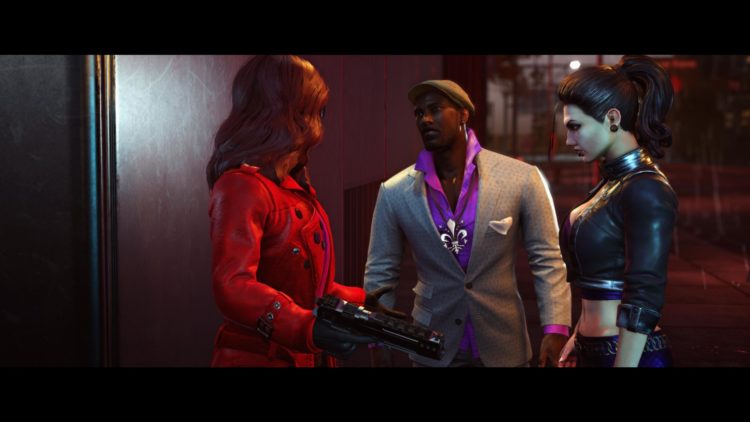 Saints Row: The Third Remastered‘s strength comes from the fact that the open-world sandbox leads to countless activities and zany moments. Do you want to do a mission with Pierce or Shaundi? Yes, you can, but why not complete some side missions such as partaking in Professor Genki’s deadly TV show or picking an assassination target and running them over with a golf cart? How about buying up various businesses to earn some cash or just zipping through the air on a jet or a witch’s broom? Sound enticing?

The antics never stop and it’s easy to get distracted from your objectives. Still, it’s what the series (or, rather, the entire genre) is known for: several missions that progressed the story, but near-unlimited stuff to do, leading you to explore the massive map and all the possibilities. You’ll find yourself lost yet entertained, and that’s a good thing. 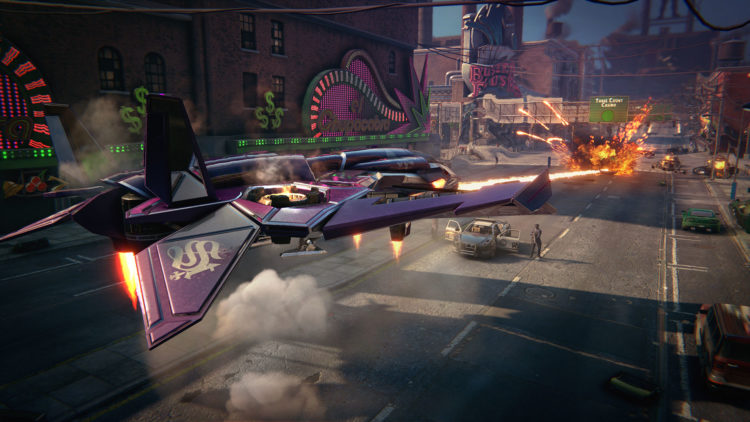 Visually, it can’t be denied that Saints Row: The Third Remastered has managed to eclipse the original in every way imaginable. Many of these improvements have been detailed in our technical review but, sufficed to say, you’re looking at a Steelport that’s more alive and stunning to look at.

The lighting effects have done wonders to make environments more pleasing as opposed to the drab presentation of yesteryears. Similarly, the new texture and model updates make this game feel like something acceptable for this modern age, down to the glossy shine of armors and decals. Plus, given the number of music tracks and radio stations you can listen to, you’ll no doubt tap your feet or nod your head when the action ramps up at certain moments.

Now, while these improvements are very much welcome — and, on its own, the shiny coat of paint and the extra level of polish remain satisfying — Saints Row: The Third Remastered would still come up short when compared to the other titles from the same genre. When it’s pitted against the likes of Watch Dogs 2, Grand Theft Auto V, or Red Dead Redemption 2, then you’ll notice how this offering has become very outdated already. 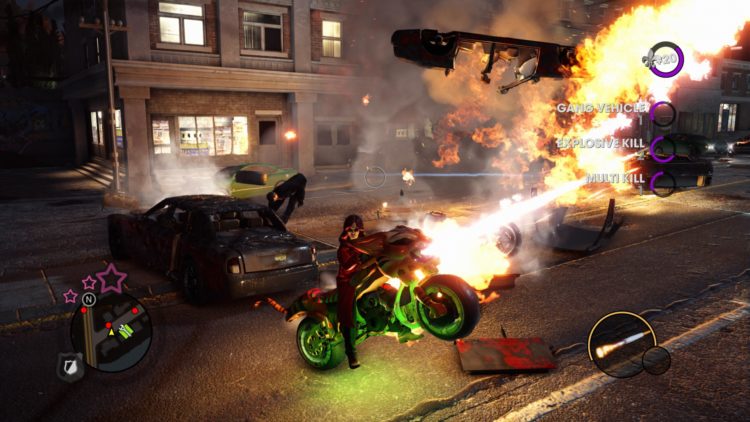 Sadly, Saints Row: The Third Remastered isn’t without some noticeable flaws, especially on PC. First off, cutscenes only play below 30 FPS. Worse, the audio during cutscenes would end abruptly only to come back out of sync. These detract from the experience considering that you’re missing out on what’s offered (outside of the regular gameplay). There can also be a problem at times with certain sound effects. For instance, the iconic rat-tat-tat of a minigun is, somehow, completely muffled when compared to gunshots from a pistol.

There are even problems with animations as they still look janky, out of place, and outdated especially when compared to modern-day open-world action games. It feels more like you’re playing Grand Theft Auto: San Andreas — when you see the basic animations which lack fluidity (such as jumping while out on the streets or characters in cutscenes), you’ll probably go, “Ah s***, here we go again.” 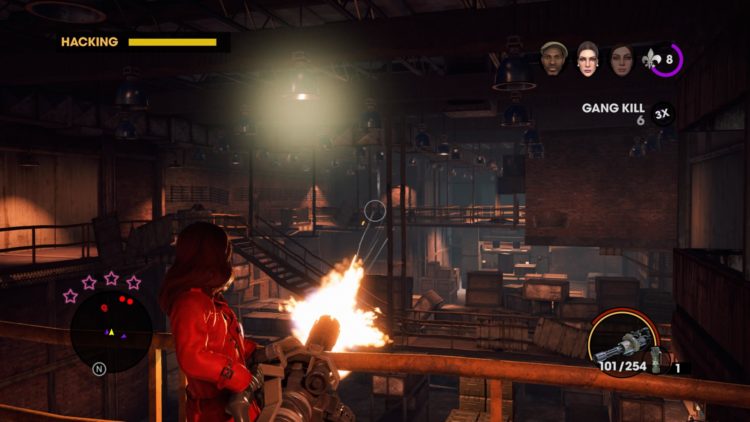 The AI can, at times, be a little too braindead, whether it’s your homies or foes. Until now, the game still lacks intuitive controls that would’ve been helpful since you can bring multiple companions to a fight. Imagine homies standing out in the open just to get shot at, or those who’d stay back in a previous room or alleyway.

Another issue that frustrated me while covering the game was that alt-tabbing while it’s running led to unbearable slowdowns. I don’t think I’ve ever experienced this problem before, even with other games on the Epic launcher (so the launcher itself might not be the issue). It won’t be a problem for those focusing solely on the game, but, if you’re doing something else — such as browsing, writing, searching for guides, and whatnot — then beware.

Also, you might even spot some odd assets here and there such as those for neon billboards and signs — these don’t look like 2020’s textures (seen below). Oh, and when it comes to Whored Mode — which is, well, a “horde mode” that’s separate from the campaign — each wave brings the action to an abrupt halt just to show your score. I would’ve preferred for it to have seamless transitions instead. 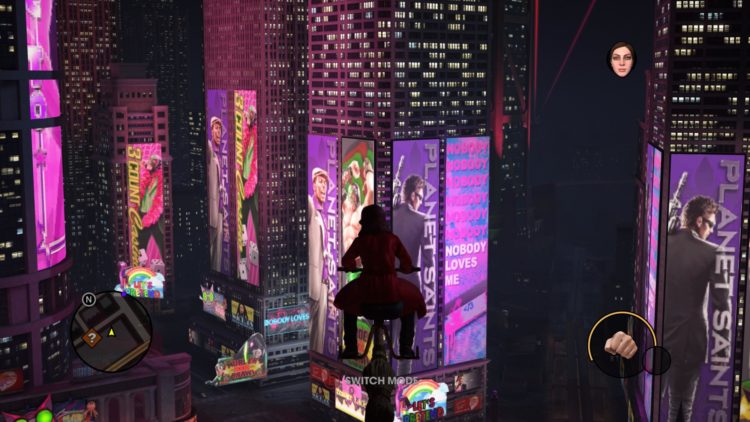 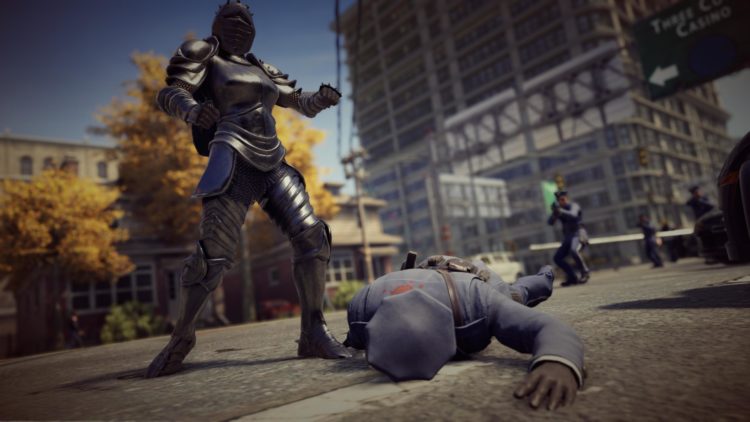 Saints Row: The Third Remastered releases tomorrow, May 22, 2020. You can purchase the game from the Epic Games Store for $39.99.

The third entry in the over-the-top open-world action game returns, now with major graphical improvements and a ton of DLCs.
7

Flawed but fun, Saints Row: The Third Remastered brings back its ridiculously addictive formula to keep long-time fans and new players entertained for many hours. Sadly, it's a bit rough around the edges, and in no way comparable to a number of modern-day titles from the same genre.