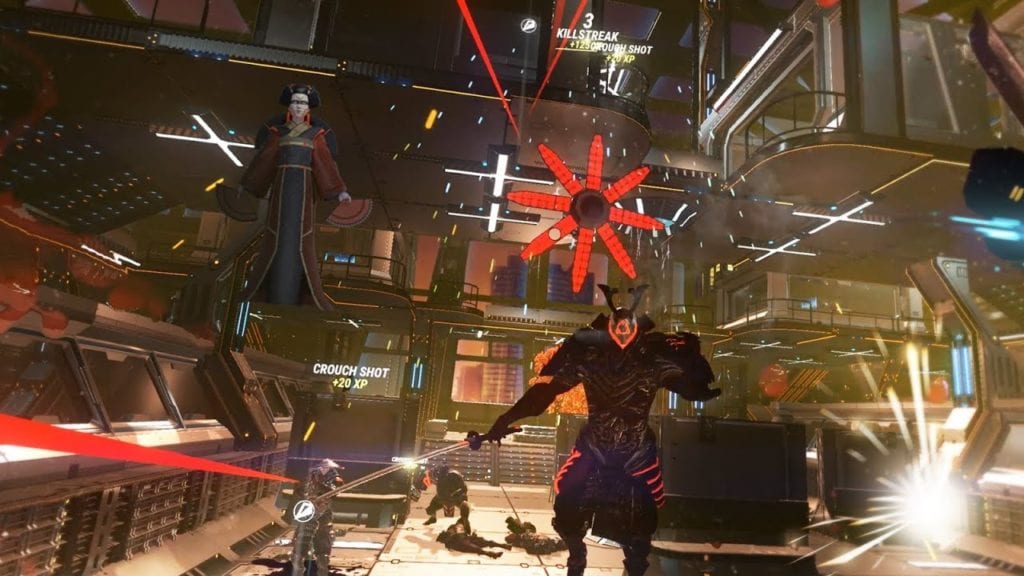 It has been a while since I played Sairento VR from Mixed Realms and the development team has had a further six months to polish the game for its release and that’s been time well spent in Early Access.

Sairento VR puts players in the role of a super agile ninja who can bound around the game’ s levels with ease thanks to a well-thought-out movement system. Players can dash, wall run and generally leap about shooting and slicing enemies to bits. Although the game uses a teleport system to put you just about anywhere in a level, you still feel connected to the world. You can adjust what direction you take by changing the trajectory of the moves depending on where you point the movement teleport arc. This allows you to use walls and double jumps to navigate around the level with ease assuming your stamina bar has not run out.

The movement is extremely fluid and thankfully there were no signs of motion sickness which is itself impressive considering how fast you sometimes need to move around the levels. Being able to wall jump, powerslide, and leap about should feel extremely disorienting but the systems employed works extremely well. I often get mild motion sickness in VR but there was no sign of it here.

Despite the fact you play as a ninja, swords are not the only weapons at your disposal, there’s plenty of gunplay in Sairento VR with dual wielding pistols, machine guns, shotguns, and more. This makes Sairento VR more than just a hack’n’slash with swords, but also a fast-paced shooter.  Like most VR shooters, players need to lower the controller and flick the weapons to reload. It’s a tried and tested sequence that can sometimes be a little unresponsive but in Sairento VR it works well.

VR games can be a bit hit and miss when it comes to visuals due to the hardware limitations but Sairento VR does a reasonably good job at making everything quite clear even if some of the textures are a little rough around the edges. Once the action starts you don’t notice it too much that but don’t expect to find a game that’s truly stunning in VR.

With its futuristic Tokyo levels and cyborg ninja enemies, the environments help pull you right into the action. The enemies can be a little predictable but, like you, they can block attacks which makes it challenging even if you know roughly what they are likely to do when you come face to face. It’s usually a case of them just running straight for you but they can be damn fast which means a lot of leaping around to avoid projectiles. You need to constantly put yourself in a better position of attack as more enemies appear on the levels. Thankfully, with the push of a button, time can also be slowed allowing you to take shots at the enemy giving you more time to line-up a target. It’s extremely satisfying when you pull off slow-motion kill midair.

Players also have access to special skills and perks which are activated via a skill tree after acquiring them while playing the game.  Anything from boosting the amount of ammo to improving health can be utilised by selecting and equipping them in the main menu screen. Weapons can also be augmented with Relics and there’s enough here for players to experiment with. You could probably work your way through the game without paying a huge amount of attention to the variety of upgrades but that’s not the point, they are there to give you a boost.

The Early Access version was really a taste of what was to come, and in the final release, they have now added the campaign mode which I was hoping would bring everything together. The campaign starts off with some basic training then you’re dropped into a futuristic Tokyo street and have to battle your way through a variety of bad-ass ninja types which are located in what are best described as rooms which make up the levels. It’s a little jarring in that respect and it’s over rather quickly and therefore doesn’t flow too well. It feels more like an extended tutorial.

Most VR gamers will probably want to play this for the multiplayer and there are PvP and PvE co-op modes to get stuck into, but as there was nobody to play with prior to launch, I can’t comment on it in this review. That said, if the multiplayer is as solid as the separate challenge missions then it will be worth it, and with any luck, more players will turn up in the lobbies now it’s released.

The version we have been reviewing was a pre-release version of the full game and we did encounter some weird bugs like enemies stuck behind walls that could not be reached which meant the level could not be cleared. This happened a few times which meant a restart of that section and that was frustrating. Bugs did crop up while playing and hopefully they will be addressed eventually. However, some were still present at launch in the final version.

Overall, Sairento VR is a solid VR game, it may not have the polish of some AAA VR titles but that’s to be expected as Mixed Realms are a tiny indie studio which is probably why bugs have slipped through the net. This is a game that will challenge your VR skills, the weapons respond well and the movement is excellent which is a huge plus in VR. Despite its flaws, Sairento VR is definitely worth checking out if you’re looking for some fast-paced VR action.

Sairento VR is pretty solid VR release that's a little rough around the edges but it should appeal to anyone looking for fast-paced action or who just wants to be a ninja.