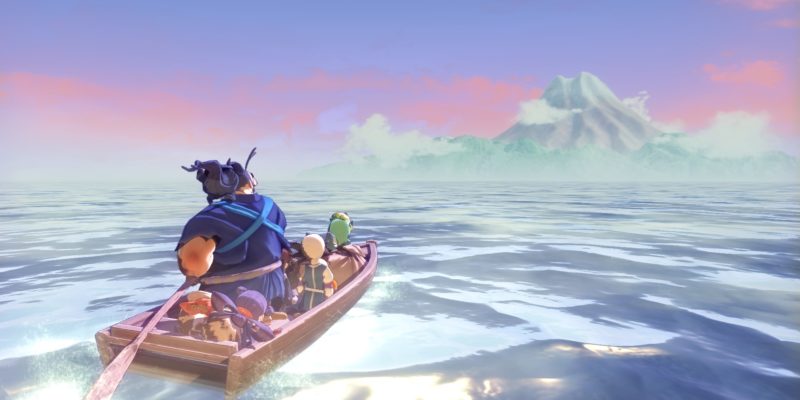 I’m conflicted on Sakuna: Of Rice and Ruin. The game has a truly surprising amount of ambition and it does some impressive things. But, when attempting such feats of design, being able to adequately explain and balance everything is of the utmost importance. Otherwise, players can become frustrated and waste time struggling to figure things out. The game’s combat is strong and the farming is more complicated and specific than I think I’ve ever seen in a game before. But all the elements don’t mix together as well as they could have. It’s a good game, but it’ll likely turn a lot of potential players off due to some of its design decisions.

Sakuna: Of Rice and Ruin is about a goddess named Sakuna who is… oh, boy, here we go… a being of untold age who looks like a little girl. She lives in a holy land along with her talking blade familiar and other deities. One day, humans find their way into the holy land, causing Sakuna to chase them and accidentally end up burning down a garner that was used as a shrine to an important deity. The deity is incensed by this and orders Sakuna and the humans to travel to an island overrun with demons in order to eradicate the threat.

The group heads to the island and must hunt, gather, and farm to see their mission to completion. There’s a lot of dialogue in Sakuna: Of Rice and Ruin, and much of it goes deep into the backstories of certain characters or explanations of the divine realm and the history of the country of Yanato. There are some lengthy cutscenes that aren’t extremely common. One of them is multiple uninterrupted minutes of the cast singing a work song while planting rice stalks. I was often bored by the dialogue, despite it being well written and translated. The Japanese voice acting is of the same high quality most Japanese games have, but I don’t care for the characters and mostly found them to be one-note and annoying. Sakuna herself is a brat, and the other characters don’t fare much better. The plot is also quite slow. 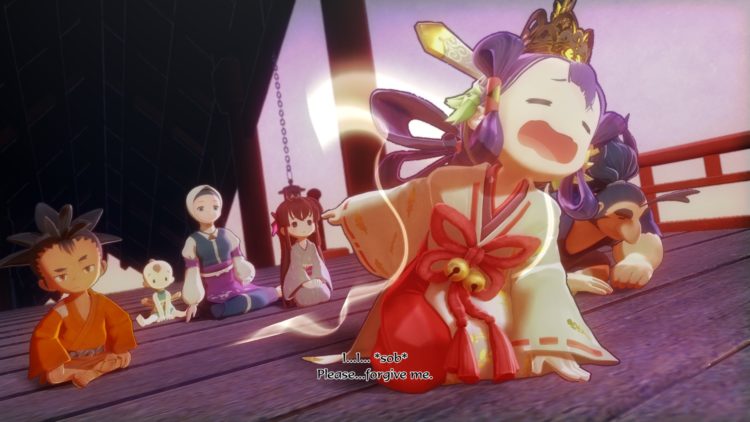 Sakuna has a light and heavy attack that varies based on the direction you’re pressing. She can knock enemies into the air for an air combo and then slam them down into other enemies. There’s also a dash and parry to make use of in Sakuna: Of Rice and Ruin. Then there’s the piece of her outfit she uses to grab foes and pull herself to them or pull them to her. There’s a lot of depth to the combat and it can be highly satisfying to pull off ridiculous combos and watch as enemies are pulverized by Sakuna’s special attacks, which utilize rechargeable SP. Obnoxiously, the game doesn’t teach you most of its mechanics off the bat and requires you to find scrolls in order to know you can even do certain things. I didn’t even know I could parry until multiple hours in.

The controls work well, even if they can feel a bit stiff and rigid, but fighting is often entertaining. Enemies drop a variety of items, including meat, hides, and other such things in addition to amber – Sakuna: Of Rice and Ruin‘s currency. Well, sort of. Things get a bit iffier with the levels themselves, as there’s platforming and level navigation to deal with. Jumping and moving around doesn’t feel as good as the combat and the levels can be a bit dull, although there are a lot of them and their design itself is fine most of the time. It can just be cumbersome, especially when trying to navigate spikes and the like, as the movement doesn’t always mix with levels. Sakuna can use that same bit of her outfit to pull herself to certain kinds of terrain to make getting around easier, which also leads to finding hidden treasure.

The levels in Sakuna: Of Rice and Ruin also have a lot of gathering spots where you can mine ore or gather plants and fish. All of the game’s levels are selectable from a map and each has challenges that increase your exploration level. At times, you’ll need a higher exploration level to progress through the story, so you’ll have to do these. You can also send the other characters to gather at certain spots and they’ll come home later with certain items. There’s a surprising amount of mechanics and ideas on display here and we’re just getting started. 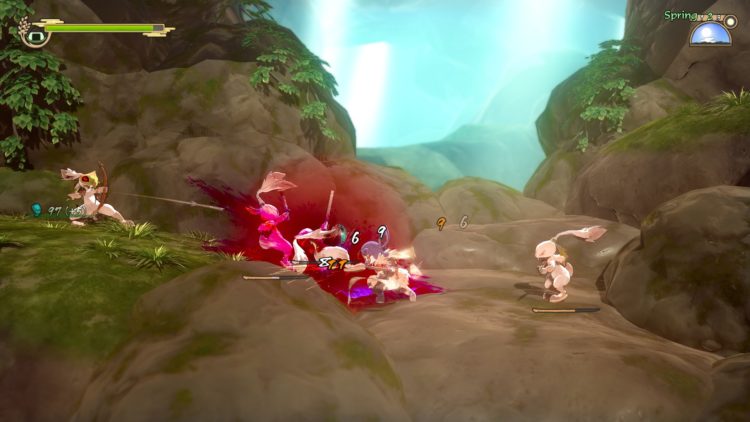 Sakuna: Of Rice and Ruin takes place over a period of multiple years. But it doesn’t handle it like any other farming game. Each year is only 12 days long, with each of the four seasons lasting three days.  There’s naturally a day/night cycle as well. When you’re not out in the levels or on the map, you’ll be at your home base, which used to belong to Sakuna’s mother. Unlike the levels, the base features fully 3d movement and is where you’ll farm, eat dinner, get sidequests, and craft clothing and weapons using found materials. Sakuna has a fullness gauge, and, as long as it isn’t empty, she gets buffs depending on what she ate the night before. You’ll have to put together your menu based on your supplies every night and choose which buffs you want while keeping in mind that many foods will expire.

Farming, as I said earlier, is complicated and exceptionally accurate. You grow rice and start by separating it by using mud and mixing it so that the lower quality seeds rise to the top. Then you start the seedlings in a box. You then till the field with a hoe before placing each individual stalk into the field. Once everything is planted, you irrigate the crops based on how far along they are, spread fertilizer daily, make sure you increase or decrease the water depending on which phase they’re in, and then you reap the harvest. Finally, you dry the rice on racks and then separate and hull it with a mortar and pestle. You can make another character do many of these steps but the quality won’t be as high. All of this is done with excruciating detail and the nitty-gritty is even more complicated. It’s realistic rice-farming.

But that leads to Sakuna: Of Rice and Ruin‘s biggest problem. Sakuna doesn’t level up like in a normal action RPG. She’s a harvest goddess, so her stats are tied to the rice. But the game doesn’t explain most of this well. I’m still not exactly sure how the stat benefits from growing rice works, as the information the game provides you with is vague and brief. I think I may have gimped my stats early on since I was waiting on the rice to dry and it wouldn’t stop raining, which resulted in another character taking the rice inside and handling it himself supposedly. But I think the game may have just skipped it, as the quest prompts didn’t vanish for an in-game year. For something so insanely complicated, there’s not nearly enough information. 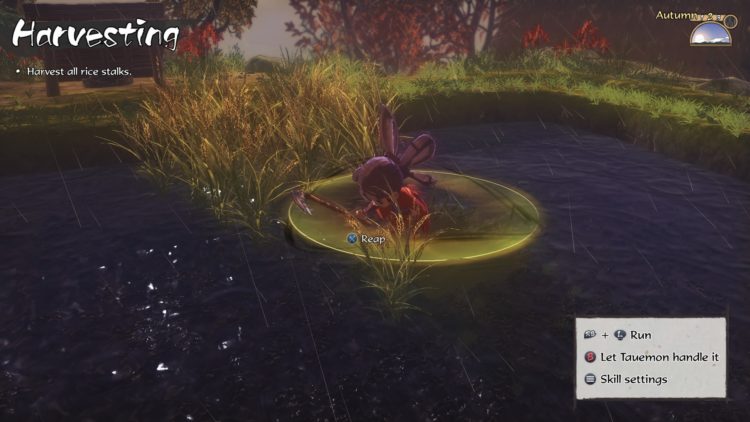 The kicker is that unless you really figure out how the farming mechanics in Sakuna: Of Rice and Ruin work, you’re going to be underpowered. Progress is handled by making it through the action levels, and I was consistently too weak. This means that you’ll have to stop progressing and wait a year to get another harvest sorted. And sometimes even that isn’t enough. There were times I’d make it to levels and just be incapable of doing enough damage or surviving long enough to accomplish my objectives. After waiting for a harvest, sometimes I still wasn’t strong enough and had to turn the difficulty down. I’m not sure if it’s the way the game is designed, or if I was just doing a bad job with my harvests, but the game just doesn’t tell you.

Both the combat and level design in Sakuna: Of Rice and Ruin can feel cheap too, with hordes of enemies being flung at you that can easily juggle you until a huge chunk of your health bar is gone. Environmental hazards can do a shocking amount of damage and successfully handling a bunch of different enemies at once can be more of a pain than it should. Especially when half a dozen flying enemies all charge at you simultaneously.

I like Sakuna: Of Rice and Ruin but it definitely has some severe clarity and pacing issues. The combat hits the right notes and the farming’s unlike anything else out there, but parsing the stat increase mechanics in regards to being able to progress without having to waste time puts a damper on the experience. The game is so unique and ambitious that it’s worth brute forcing your way through, but the frustrations will be a deal-breaker for some players. 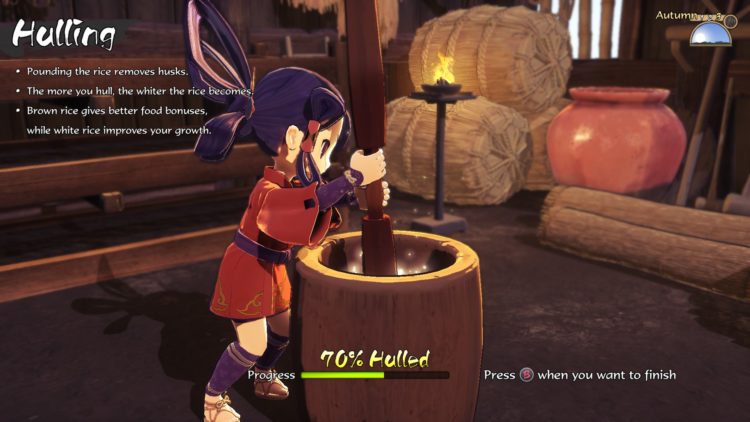 Sakuna: Of Rice and Ruin

Sakuna: Of Rice and Ruin is a deep, intriguing game that makes some poor design decisions and fails to clarify itself. The mechanics are interesting and unique but its got a hell of a learning curve.