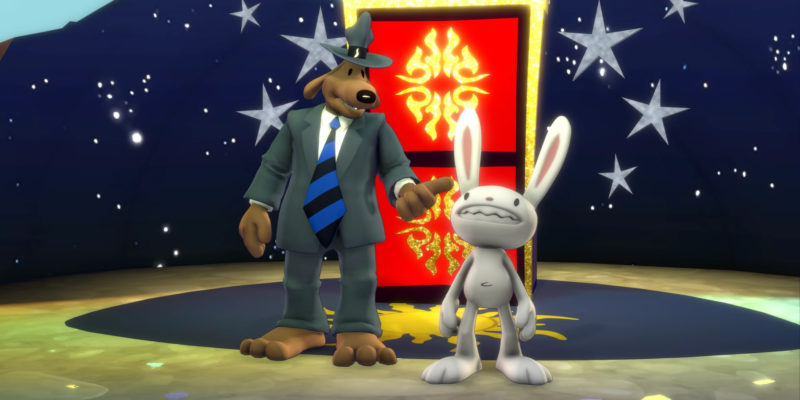 Point-and-click games are never dead, they just take a nap until someone decides to slap a fresh coat of paint on them. The latest member of this age-old genre to get a touch up is Sam & Max, the story of two freelance police officers trying to bring some justice to their zany cartoon world. Officially titled Sam & Max Save the World – Remastered, this is only the first of three seasons worth of mystery-comedy being reworked by Skunkape Games.

Sam & Max originally released in 2006. It was one of the first major successes of Telltale Games, the developer that would go on to make other hits like The Wolf Among Us and Telltale’s The Walking Dead. It tells the story of two freelance cops, Sam, a tall hound dog detective, and Max, a short thing that could technically be called a rabbit with a penchant for chaos. Together, they solve the mysteries regular salaried officers won’t take, regardless of how gruesome or weird they can get.

When it releases this upcoming December 2, Sam & Max Save the World – Remastered will bring the classic series into modernity. The game will feature enhanced graphics that come with a brand-new lighting system, widescreen support (which was a rarity in 2006; PC gaming really has come far), and gamepad support, so players can lean back in their chairs and enjoy the comedy stylings of the dog and rabbit duo. Sam & Max will also feature new music, although it doesn’t seem like it will have additional content. What’s there is simply being spruced up.

This is the first of three separate seasons of Sam & Max being remastered. The other two, Sam And Max: Beyond Time and Space and Sam & Max: The Devil’s Playhouse, are likely to be released at a later, unspecified date. For now, those interested in Sam & Max Save the World – Remastered can pre-order the game on Steam or GOG. If you already own the original series, you can pick up the remaster for 50% off until December 31.

Farming Simulator 19 Alpine Expansion – Is it worth it?