For the past couple of months I’ve been toying with getting into 4K gaming, but the more I read, the more I realise it’s probably not worth it for me at the moment. The graphics card in my gaming PC was OK (a GTX 760,) and recently upgraded to a GTX 980. But even with the more powerful card now in place, going the full 4K at the moment is still not tempting enough. With Nvidia’s DSR (Dynamic Super Resolution) now coming into play as part of the GeForce Experience (and now AMD’s Omega drivers) along with a beefy enough PC to do a bit of down-sampling if desired, a 4K monitor is not a priority for me right now.

For those like me who don’t yet want to go the 4K route but are keen on a larger monitor, Samsung have a pretty large 32″ effort available: the new Samsung S32D850T 32 LED Slim Gaming Monitor. It has the size advantage over 4K monitors in a similar price range, and we’ve taken a look at it. After the image, enjoy some scintillating stats. 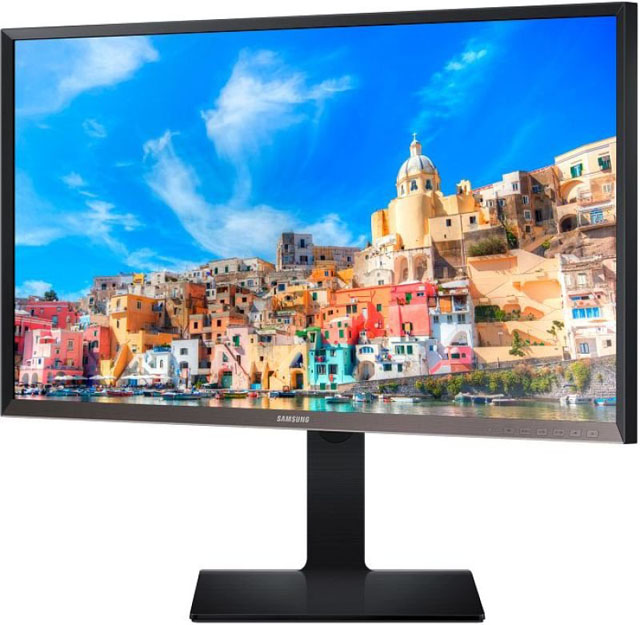 As you’ll probably have grasped, this monitor is pretty large. Thanks to a very robust adjustable stand, it also has the ability to rotate the between a portrait and landscape configuration. You may not ever plan to put it in portrait position, but you’ll have to switch it to landscape at least once because the monitor comes shipped in portrait form with the stand already attached. Happily, the smooth action on the stand makes it easy to change to the landscape position for normal desktop usage.

This monitor can tilt back to around 20 degrees, which is a lot more than your average monitor, and there’s a swivel of around 30 degrees too. The stand is excellent and probably one of the sturdiest and maneuverable I have seen. There’s a wall mount bracket as well which can be attached.

With a maximum resolution of 2560 x 1440, this 32’’ model is a sizable beast, and ideal if you’re looking for a more panoramic gaming experience. It should suit anyone who’s wanting a monitor that can perform well for normal office functions but also offer size for gaming. 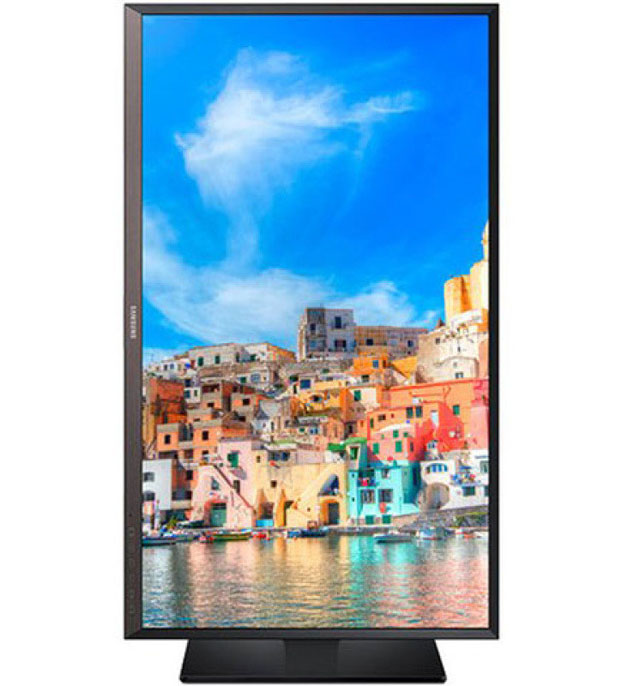 Probably not the most desirable view for gaming.

From a gaming perspective, the connectivity in the back of this monitor is spot-on: a DVI, DisplayPort 1.2 and HDMI 1.4 connections.

As I’ve said, I recently added a GTX 980 into my PC, which left me a slight dilemma because there’s only one DVI, one HDMI and multiple DisplayPorts connection on the back of that card. When the Oculus Rift arrived I was suddenly short either a DVI or HDMI port to connect it to. Adapters were an option, but with the Samsung resolved the problem with it’s DisplayPort connection. With DisplayPort now becoming the connection of choice, especially for 4K, connecting up older hardware is becoming more of a issue; especially if you’re not keeping the rest of your set-up at pace with video card slot configurations.

With the 32’’ screen taking up more desk space, there’s USB ports at the back of the monitor, one connecting to the PC, and an additional four USB 3.0 slots for peripherals. Audio jacks are also included just for good measure, which can reduce the amount of cables trailing from the PC. 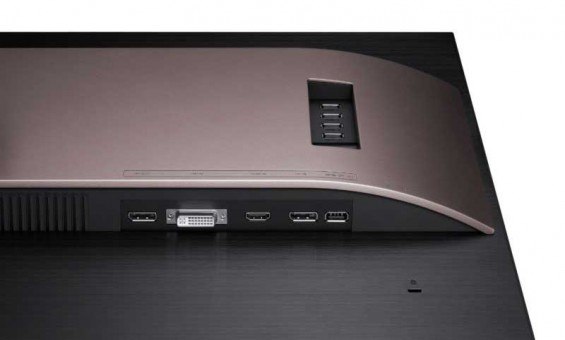 Everything you should need.

This monitor will do an excellent job for normal desktop work but we’re particularly interested in the mysterious “Gaming Mode” option which has been added by Samsung. Do these presets really make a difference?

On activating the gaming mode there is a significant change in colour, which is really noticeable before you even launch any game. The screen turns a lot brighter and the colours really pop. In-game, the increased contrast and brightness result in a real difference to colour vibrancy. It won’t be to everyone’s taste as it can look a little over saturated, but the “gaming” switch serves as a quick way to activate these presets via the monitor menu system.

While we’re on the subject of the menu system, it’s unusually easy to use thanks to the fact the buttons are mounted right on the front of the monitor on the bottom right of the frame. I can’t stand it when the buttons are hidden behind, or underneath, and there’s no clear indication of what you’re actually pressing, so this was very welcome.

As you activate the menu, handy arrows appear on the screen which actually indicate how to navigate around the options. It makes life so much easier, especially if you’re wanting to switch video sources or into the “Gaming Mode.” It would have been even better, however, if the monitor had a single press toggle on the front panel to switch between normal and gaming modes. 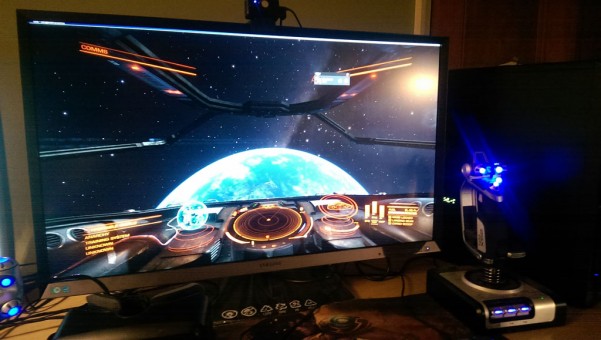 If you like to play your games at an unusual angle, the monitor’s image quality is adequate when not faced directly; and with that large tilt angle you could position it more to your liking. As far as how it handles games, there are three response time modes. These are labelled as Standard, Faster and Fastest. When set to Fastest, the monitor appears to perform well with no noticeable hiccups when gaming. I didn’t spot any ghosting or blurring when playing, so there appears to be no problem with dropped frames or anything that could be an irritant while playing.

Aesthetically, this is a good looking monitor, with a black bevelled edge and brushed metal backing. But keep in mind that it is sizable. I had to do some serious desk re-jigging to get the set-up pictured above. Despite it’s size, though, the actual monitor panel is reasonably trim. You just need to leave plenty of space for that sturdy stand. It’s also weighty, coming in at around 12kg. Not one to buy if you plan to be moving it around a whole lot. 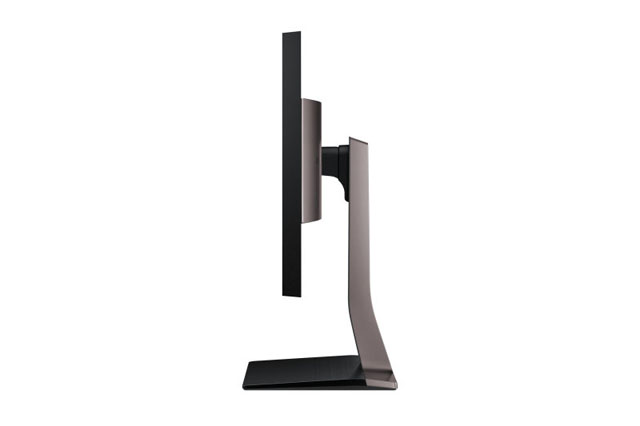 Having used this monitor for a number of days for both standard office work and gaming, I’ve come away impressed. Not just because of the 32″ size, it’s a well designed screen and performs extremely well no matter what you’re using it for.

If you’re not wanting to make the jump to 4K, but want to play your PC games on a larger screen, then this Samsung is definitely worth taking a look at. It has all the inputs and features you would want as a gamer in search of a screen size upgrade, and over the past few days it has performed brilliantly on numerous new and upcoming games including Elite: Dangerous, Dirty Bomb and Deathtrap.

This monitor is not the cheapest, and it’s a tough call whether to go for a (relatively) inexpensive, but smaller, 4K monitor or this one; but you are paying for the size here. A large, quality 4K monitor will cost more, so the Samsung S32D850T could be a good stop-gap.

Tips when thinking about buying a new monitor by Easypc.io