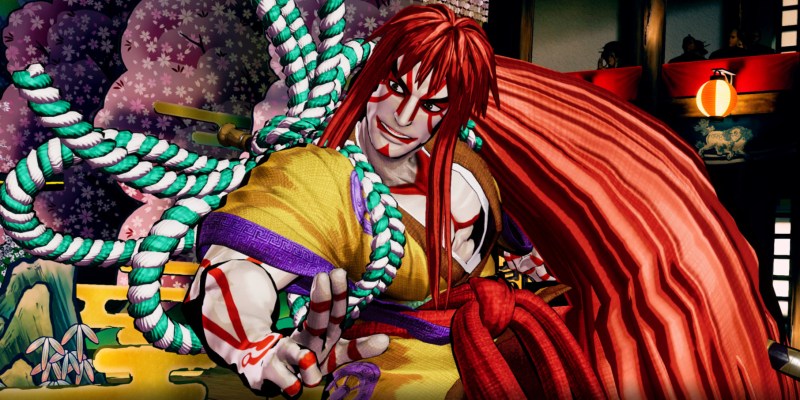 SNK’s Samurai Shodown reboot finally comes to PC, albeit as an Epic Games Store exclusive. Arriving at the same time as the Samurai Shodown NeoGeo Collection, which celebrates the fighting game series’ legacy, the latest title posits itself as a new beginning for the series. The reality, however, is that Samurai Shodown cleaves very closely to its arcade roots, even when we’ve come to expect more from a modern fighting game.

The Samurai Shodown series has been around for over 25 years, even if it never got the same recognition as Street Fighter or Mortal Kombat. But it still stands out for its unique style, both in aesthetics and in gameplay.

The way of the warrior

On the surface, Samurai Shodown’s mechanics seem par for the course. You’ve got your light, medium and heavy attack, plus a kick. What really makes Samurai Shodown different is damage. Fittingly for a game with lethal weapons, every hit counts. A heavy attack is slow, easy to interrupt, and hits for massive damage. Blows feel appropriately weighty and satisfying to land. Because a well-timed basic attack can turn the tide of battle, fights center around footwork and spacing, using dashes and fast attacks to set up your heavy strikes — or bait your opponent into whiffing theirs, leaving them open. 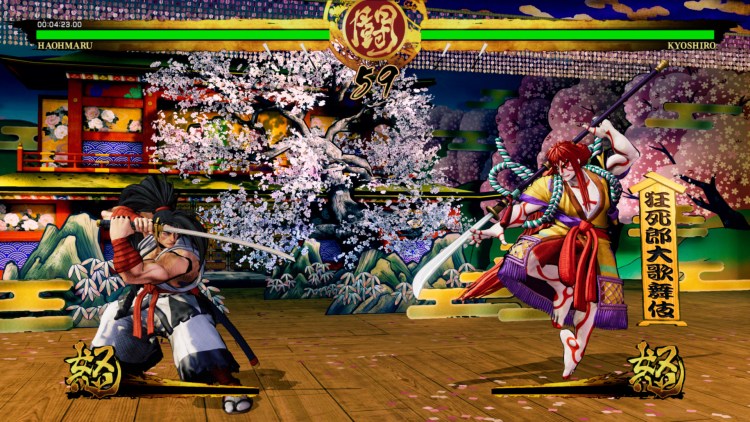 Samurai Shodown always stood out for staying true to Japanese style, even when released worldwide.

This precise fighting style is a fun change in pace from the combo-focused approach of most fighting games. Weapons really feel dangerous, as opposed to basically being LARP-style foam paddles (looking at you, Soul Calibur). There’s (optional) gore that adds to the visceral feeling of the battles. It’s no Mortal Kombat, but strong hits can see your opponents gushing blood. It’s even possible to bisect your enemy. Those standard attacks are no joke.

Special moves are mostly based on similar, relatively simple inputs, and are more about giving your character unique options than being big damage-dealers. Parries, dodges, and counters can all be mastered for a higher level of play. It’s also possible to pull off attacks that disarm your opponent, crippling their offensive power until they can pick up their weapon. You also have a rage meter than can be spent for a boost or to power a super-move.

Fights in Samurai Shodown are exciting and feel very high-stakes. In keeping with the samurai pop culture inspiration, it can all be over in just a few cuts, but two skilled opponents can drag out a tense fight as they probe each other for weaknesses. 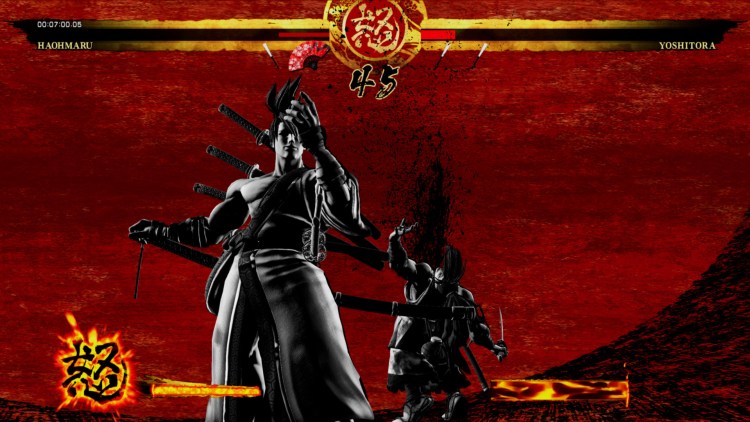 Samurai Shodown’s art style changes under certain conditions, such as during a fatality

Samurai Shodown’s commitment to its Sakoku-period aesthetic gives the game a style like no other. Its colorful and dreamlike backgrounds are reminiscent of historical Japanese paintings, and the exaggerated characters are drawn with thick black lines for a comic-book feel.

Samurai Shodown has style in spades, although it doesn’t always hang together perfectly. In particular, the character outlines can shift around weirdly. Some of the fight stages, like the galleon, feel like they belong in a different game. Overall, Samurai Shodown looks cool and carries itself with theatrical flair. Plenty of great little details pop out ⁠— the animal animations during load times or the way the stage select is laid out like a set of playing cards.

Seven samurai and then some 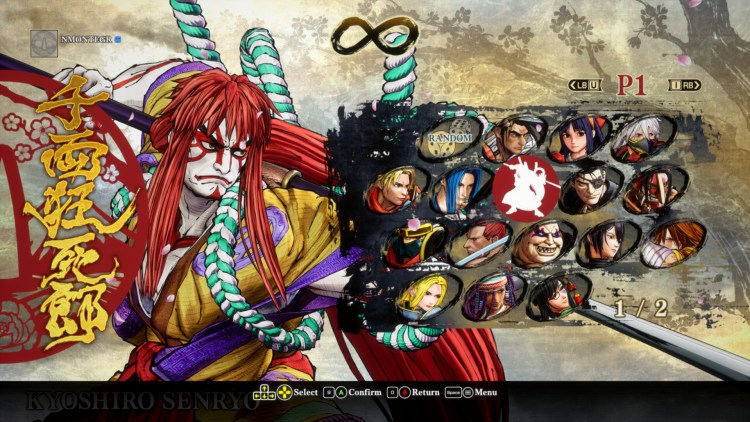 The base Samurai Shodown comes with 16 fighters, but 8 more are available as DLC.

There’s a samurai to suit everyone, including stalwart sake-swilling ‘shoto’ swordsman Haohmaru and his rival Genjuro. Then you’ve got Yoshitora, a lover and a fighter who carries seven swords, each named after a lady friend. There’s also Ukyo, a sickly but determined Iaidō master, and the dual-wielding Jubei.

It’s not all katanas, though. Plenty of unconventional fighters round out the roster. Longtime series heroine Nakoruru can grab on to her eagle companion to launch special movies. Hopping, gurning kabuki actor Kyoshiro is a deadly fighter despite his clownish demeanor, and there are a few ninjas, ranging from the conventional to the bizarre (the mighty Earthquake, a giant bruiser who probably doesn’t do a lot of sneaking around). 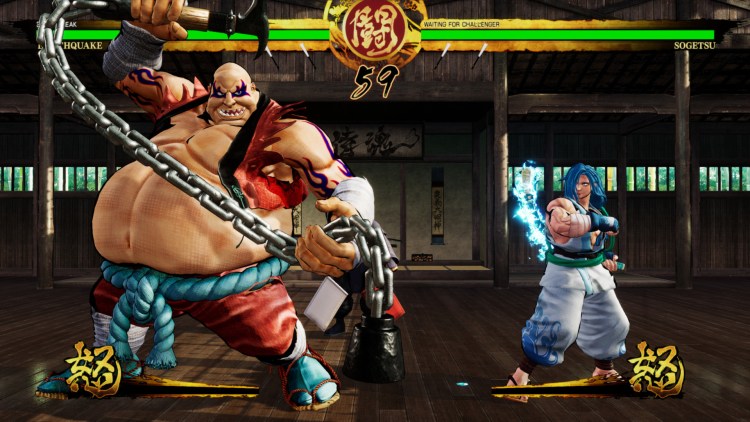 Maybe he doesn’t look much like a ninja, but would you say it to his face?

Almost every character from the original Samurai Shodown is present (where are you, Gen-An?), with the best from the sequels and a few interesting newbies. My personal favorite, Darli Dagger, is a hard-drinking islander who wields a huge serrated saw blade to devastating effect. The base game includes 16 characters, with 8 available as DLC (so far). The game’s final boss, in time-honored SNK tradition, is horribly unfair and unplayable. All-in-all, a good mix of cool weapons and colorful personalities, although it’s a shame that the game’s story mode doesn’t do so much with the latter. 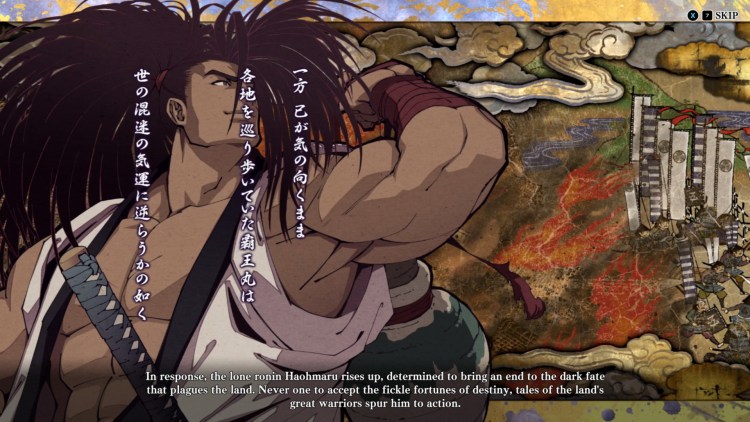 In all fairness, Hoahmaru never had the deepest character motivations…

Samurai Shodown’s fighting fundamentals are great. It feels like I’m playing an excellent arcade game. What it isn’t, though, is a particularly good single-player game. The game’s story mode is a barebones sequence of fights, with a few exposition slides about a vague evil in 18th century Japan and one battle with a rival that prompts a line of special dialogue. There is a story here, but it’s not given much attention.

This feels like a letdown compared to the robust story modes in AAA fighting games today. Narrative aside, there’s no way to experience unconventional matches, collect items or customizations for your fighters, or anything like that.

Instead, Samurai Shodown sticks to a few old-school single-player modes like time attack or endurance. The ghost mode pits you against AIs trained on the behavior of other players. Online play offers casual and ranked matches, with the option to enter at a higher rank of your choice if you think you’re hard enough.

Compared to the epic story mode of Mortal Kombat 11 or fun variations on the fighting game formula like Soul Calibur VI’s Libra of Soul + character creation, and Samurai Shodown’s back-to-basics philosophy just feels, well, basic. I feel strange criticizing a fighting game for being only about head-to-head fighting, but perhaps I lack true samurai spirit.

Samurai Shodown may be minimalist, but it puts the fun in fundamentals and the SNK weapon fighter still offers something unique. But it would be nice to have a little more to play around with.

Samurai Shodown pits a colorful cast of warriors against each other in a heavily stylized version of 18th century Japan. Easy to learn but hard to master, the reboot holds on to the best parts of its arcade roots.
7

An excellent fighting game fine-tuned for tense, thrilling bouts. While the fighting is always fun, its feature set is slim, with only a handful of modes that don't stray far from the core gameplay. If you're looking for a fight, you've found a good one, but don't expect a big story mode or much side content.