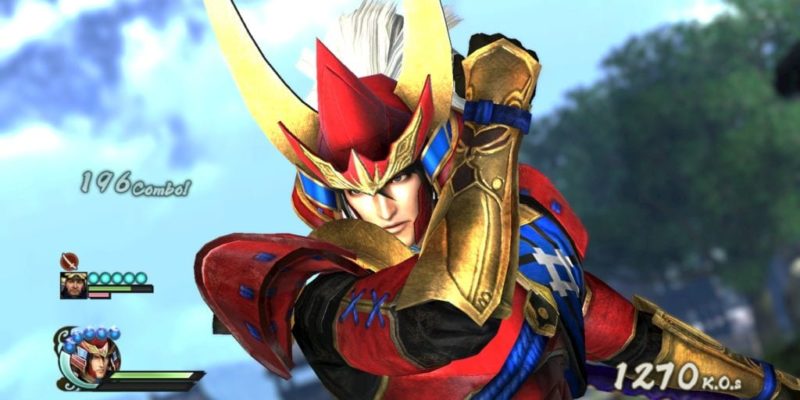 In-keeping with the trend of Japanese studios tentatively taking Steam slightly more seriously, this is the third Warriors game (fourth if you’re counting Bladestorm) to get a Western PC release in recent times.

As an eager student of Musou, I naturally couldn’t wait to get stuck back in with the Yellow Turban Rebellion and find out how Cao Cao’s name is being pronounced this ti … wait a second, who are all these Samurai guys?

Samurai Warriors 4-2 isn’t just one number shy of being a football formation, it also switches the setting from Romance of the Three Kingdoms era China to waring states era Japan (think Total War: Shogun 2, if you’ve played that). It also seems just as historically accurate as you’d expect. Which is to say, not in the slightest.

That’s not what we’re here for, though. Today is all about investigating whether Tecmo Koei have figured out how to do a top-notch PC port yet. The short answer is … not really. But there has been some progress.

Stand by for graphics options menus. 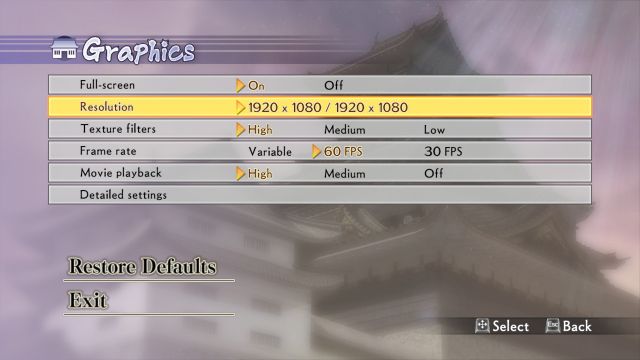 Samurai Warriors 4-2 opened in 720p, and changing it to 1920×1080 (as shown above) was a slightly boring process of pressing ‘right arrow’ on that menu option and watching the screen go blank every time as it re-calibrated the resolution. Maybe I should’ve pressed left instead, it might have gone faster.

Anyway, as you can also see, there are three frame-rate settings. 60fps is the cap no matter what, so ‘variable’ is presumably just for those who can mostly get 40-50 and don’t mind it fluctuating a bit.

I think ‘Texture Filters’ might be secret code for some sort of anti-aliasing, but I’m not entirely sure. You can change the ‘Movie playback’ quality on this menu too (and even turn them off entirely, apparently).

A few slightly more exciting options for scalability can be found under ‘Detailed settings’, so let’s have a gander. 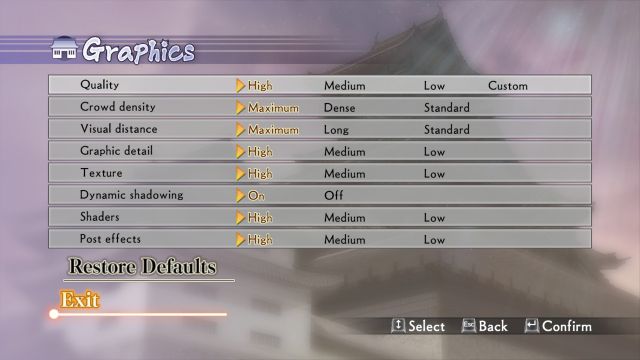 Pushing it TO THE LIMIT.

Samurai Warriors 4-2 isn’t the most demanding game in the world, so my definitely-fine-for-this-sort-of-title i3-2100 / 8 GB / 2GB 7870 box could handle everything on High. It turns out ‘High’ isn’t all that much to brag about on PC, but we’ll get to that shortly.

Here’s a comparison of roughly similar areas on High and Low pre-sets. You can click to make them larger and improve your chances of spotting the difference. 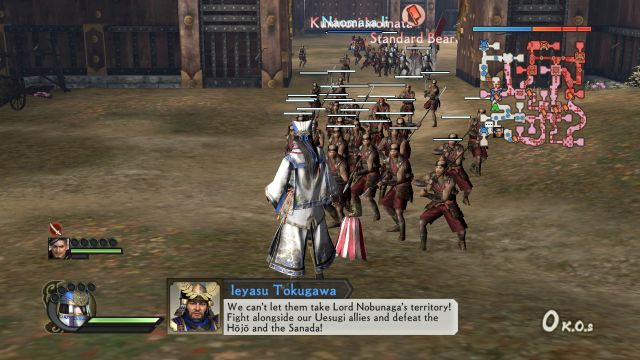 This is everything on low/minimum. 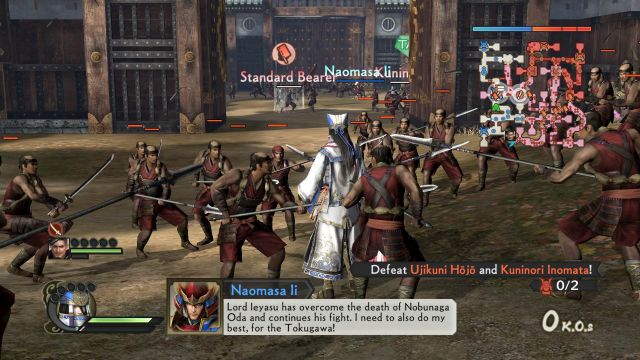 And this is with everything at High.

If you’ve seen any images from the PS4 version, you’ll know that the PC one is lacking some of the textures, lighting and post-processing effects from that release. Character models appear to be the same, which is an improvement over the Dynasty Warriors 8: Xtreme Legends PC release, but we’re still not quite at the point where Koei trust us with all the same graphical features as the PS4.

I’m not too sure (but assume) that a maxed out draw distance and soldier density make the PC version the equivalent of the PS4. It certainly appears so. There’s still a bit of pop-in even with the draw distance at full, but it’s not too awful.

What is more annoying is Koei’s continued insistence on using obscure button symbols in tutorials and defaulting to keyboard prompts in all other cases. It means if you use a gamepad (which, let’s be honest, most will for this sort of game), you have to pretty much guess the controls for a while.

It’s not an insurmountable obstacle, but standing next to a horse while I tred to figure out what ‘small symbol of a horse head’ translated as on my controller made me feel pretty stupid for a while (turns out it was X). 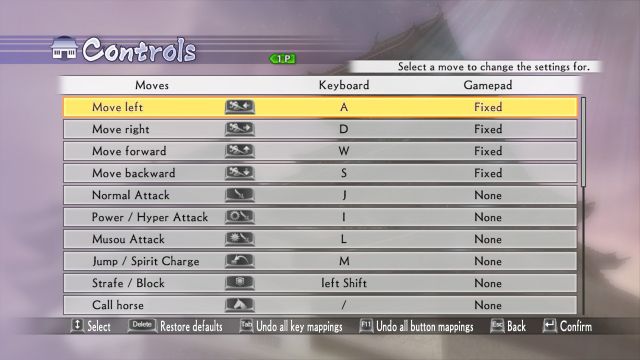 Life is slightly easier on keyboard, because at least the menus give you the correct button prompts. Good luck figuring out what ‘Tab’ might be on a 360 controller. You can also re-assign keys, if you fancy.

Unfortunately, it completely ignores the existence of a mouse. So you’ll have to do all of the camera control on keys. That’s about as enjoyable as it sounds. 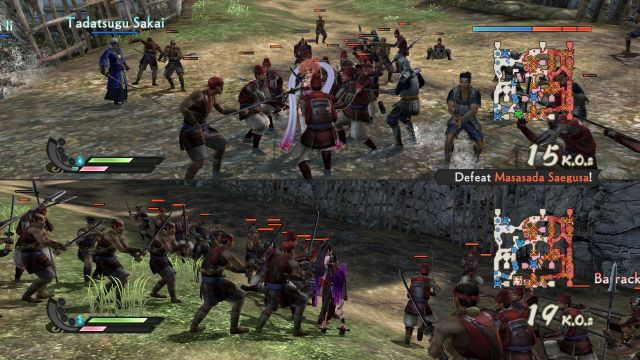 Cor, split-screen, that takes me back.

Unlike Xtreme Legends on PC, Samurai Warriors 4-2 actually has the option for online co-op play. Local co-op (with splitscreen, albeit restricted to 30fps) is there too.

Co-op play is available in Story and Free-play modes (basically the same, but in Free-play you can re-do any completed Story stages with an unlocked character of your choice). The only other mode actually in Samurai Warriors 4-2 is an endless castle floors survival thing, which puts it rather behind Dynasty Warriors 8: Xtreme Legends in the ‘having a bunch of stuff to do’ stakes.

It does, however, have an amazing bait-and-switch involving a busty young lady in her teenage years who turns out to be … the protagonist’s mum. 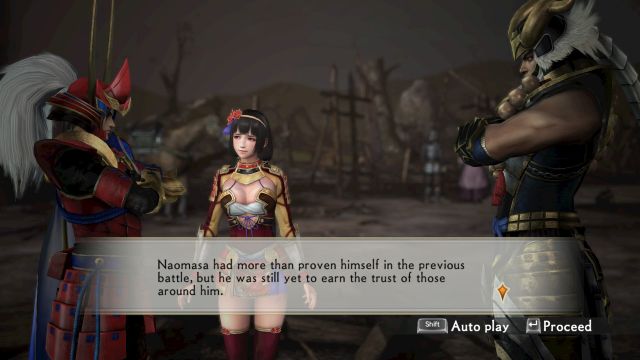 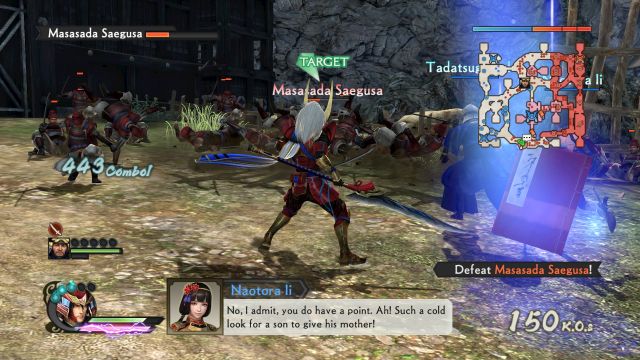 Port-wise then, it’s about what you’ve probably come to expect from a Koei Warriors game on PC. A PS3-PS4 graphics mish-mash (why they can’t just give us the scaling options to switch between the two is a mystery for the ages) with a confusing lack of button prompts, and apparently no mouse support. I’m also a little sad that you can only have Japanese voice acting in Samurai Warriors 4-2. Half the fun of Dynasty Warriors is hearing the English cast hamming it up in glorious style.

It does get (some) of the ultra basics right though. You can play in 60fps and 1080p (but nothing above that), and the character models at least look alright. Full online and local co-op has been included, so they at least listened to those requests. Minor progress over prior Warriors ports, but it’s something.

One day we might see PC Warriors games with a full graphics suite, 4K resolution support and accurate button prompts. For now, Samurai Warriors 4-2 actually exists on PC, which in itself would’ve seemed fairly amazing a few years ago, but it’s another pretty basic port.