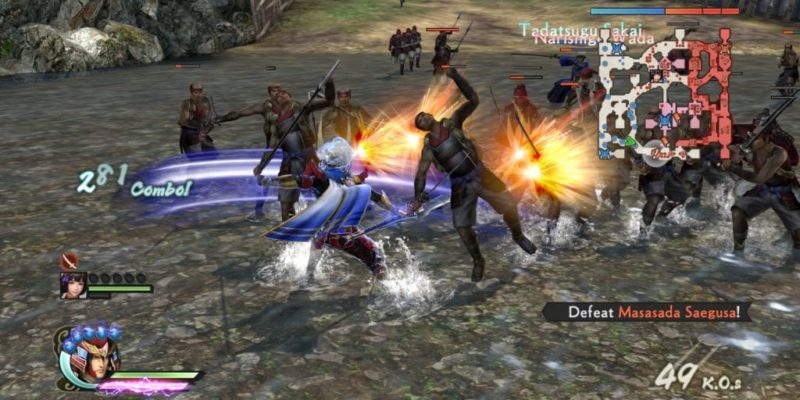 Musou-mania continues to spill over to the PC, with the release today of Samurai Warriors 4-II on Steam. I’m not especially familiar with this branch of the romanticised-lone-warrior-slays-thousands (sorry ‘knocks out’ thousands) series, but it’s very much from the Dynasty Warriors school of design.

Except based around the Japanese Warring States era instead of Romance of the Three Kingdoms.

For those wondering what type of version the PC has received, it’s looking like a (sadly) fairly typical hybrid version. I don’t have the game myself, but reports from players on the Steam forums (plus piecing together pre-release information from Koei) indicate it’s a mix of PS3 and PS4 stuff again (as was the case with Dynasty Warriors 8: Xtreme Legends on PC).

The image above is taken from the Steam forums, and shows that while character models, character numbers and overall draw distance appear to be firmly from the PS4-quality camp, the (ground) textures and lighting look a lot more PS3-ish.

That’s in-line with various Koei utterings about Samurai Warriors 4-II on PC prior to its release. Here’s a tweet confirming that character models would be fine, for example. Though you had to read between the lines and know the porting history to notice that they didn’t specifically address texture quality as a whole.

As much as we know the character models are based on PS4 quality for SW4-II PC, we will keep you updated. #KTfamily https://t.co/22E8z0vlLQ

Other pre-release information confirmed that the game would support 60fps and 1080p; again, like Dynasty Warriors 8: Xtreme Legends.
But this stuff also steered clear of mentioning ‘the ground and building textures will be a bit rubbish though’.