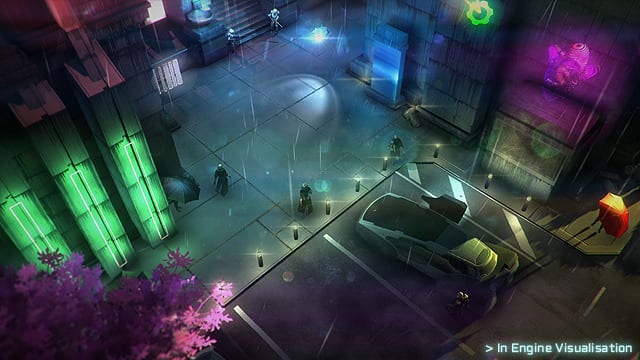 A sinister future shot through with neon and rain awaits people in ten days time, when Satellite Reign leaves the lab-like confirms of Early Access and is put out to general release.

Between now and 28 August it’s possible to bask in the glow emitted by this somewhat early ‘launch’ trailer (though since Satellite Reign has been available in Early Access for some time now, I guess it technically launched a while ago). It gives a look at the Syndicate-like open city, as well as the skills available to your specialist agents.

Hacking, stealth, and churning security forces up with massive miniguns are all pathways that can lead to successful completion of a mission. Rather than trying to take over the entire planet (as in Syndicate), the goal in Satellite Reign is to be the number one organisation in the city.

To that end, it’s necessary to pursue missions, engage in research and development, upgrade your agents, and generally act as a nuisance to the other forces controlling the streets.

Satellite Reign drummed up £461,000 on Kickstarter back in June 2013, and is being developed by 5 Lives Studio. Former Syndicate Wars man Mike Diskett heads that studio.

Here’s the new trailer. You can read some (very) Early Access impressions about Satellite Reign here, but keep in mind the game has changed a fair bit since I looked at it last.