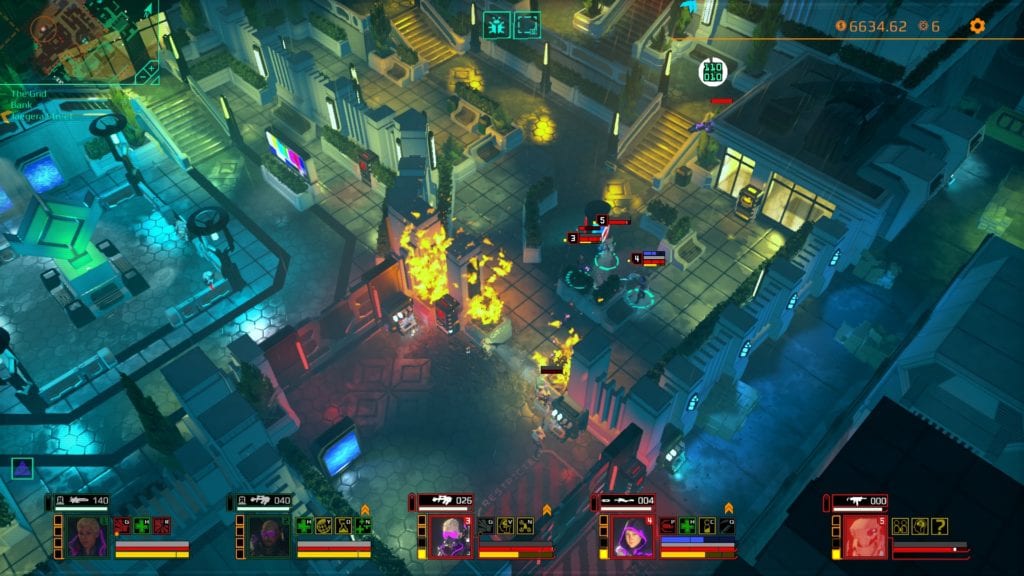 If you’ve seen the PC Invasion review of Satellite Reign, you’ll already know the Syndicate-inspired game has sent various pleasurable signals through my neural input device. For those who’ve never played the Bullfrog titles though, or for people who are finding the squad-based heist tactics a bit tricky, here are some helpful tips and advice on agent ‘builds’.

After all, every new corporation needs a business plan.

I’m assuming you’ve done the Satellite Reign tutorial and paid at least vague attention to what it was saying. If not, do that first.

Once you’ve roamed around the Downtown district and activated all (or most) of the fast travel beacons, you’ll have opened up the bank job mission in your list of district activities. It’s a toss-up whether you want to rescue your infiltrator friend or rob the bank first, but these should be your immediate post-tutorial aims.

You’re given the choice to either get your hacker or soldier into the bank vault. The former will pay off better in the long run, as it gives you a boost to all hacked ATMs in the area as well as a (slightly smaller) lump sum. You can send the soldier back in at a later date if you wish. Banks replenish funds over time, so if you need a quick withdrawal, you can always rob them again.

Edit: Reader Gillsing tells us that you can actually send the soldier and hacker in at the same time, claiming both bonuses at once; useful to know!

Once the bank is sending money your way, start hacking any level one ATMs you can find in Downtown.

Money is used to equip your agents (with weapons and cyber-parts) and for research. You’ll always need more of it. If you see an ATM and are able to hack it, do so.

I’d like to make a withdrawal. Many times over.

A Friend In Need.

Then, if you didn’t already, do the mission to bust your infiltrator out of their holding cell. You can do plenty of things with a three man team, but you may as well get back up to full strength as soon as you can.

As you walk around Downtown (and, later, when you’re in Industrial or The Grid and so on), make sure to periodically use the support agent’s ‘world scan’ ability (Y is the hotkey for this) and keep and eye out for yellow hued pedestrians.

The ones with a little atomic symbol are research scientists (other yellow chaps tend to be part of a mission) can be easily bribed into helping your cause. More scientists means cheaper, faster research of gear and weapons, so try to locate as many as you can. Downtown may not be flush with PhD candidates, but I found a couple strolling around in both the Industrial and Grid districts.

Satellite Reign’s agents are created from clone stock. Better ‘base’ bodies will give you boosted stats (at least until that agent dies a couple of times and the clone degrades). In order to find decent clone candidates, use the support’s world scan and (if you wish) pay for additional information about potential targets. Then send in your hacker to brainwash them, and direct them back home for cloning.

I’ve found that guards and soldiers generally have some kind of boosted stats, so you can get away with hacking them ‘blind’ (sending them for cloning after you’ve finished using them on a mission works pretty well). Keep a relatively healthy clone stock and you should always have someone with bonus stats to boost your agents.

Just because you can send all four agents in on a mission, it doesn’t mean you actually need to. Sometimes having close, micro-management control over a lone hacker or infiltrator can be the better solution. Consider how many people you really need to send in to a given facility, and if it’s only one or two, go with that plan.

If you do this a lot, you may end up with a couple of agents at a much higher level than your others. Not necessarily a problem, but something to keep an eye on.

Something Satellite Reign doesn’t make terribly obvious is where agent experience points come from. Staying in cover when inside an enemy compound (and moving from cover-to-cover) gets you points, so it’s actually beneficial to always stick to cover, even if there aren’t too many guards around.

Basic combat also results in experience points, so if you want to gather up a few outside of a specific mission then just start some trouble with the local district security.

If you find yourself in trouble after fleeing a mission (whether its gone well or poorly) and pursued by enemies in the open city, try to escape towards a fast travel beacon. Not only do these tend to be somewhat hidden and out of the way, but standing next to them recharges shields, armour and health. Proximity to a beacon sometimes seems to make the alert level decrease faster too, unless that’s just me imagining things.

The relative safety of a nearby fast-travel beacon.

When equipping your agents with shiny new weapons, pay attention to the information regarding damage-type outputs. Armour will become a problem first, but later security forces will have both armour and shields. This means it’s useful to have a spread of weapons in your squad.

Make sure you have at least one or two members carrying a weapon that’ll melt either armour or shields (it tends to be plasma for the former and lasers for the latter), and give each agent a back-up side-arm that can efficiently damage things their main weapon cannot.

The above are all general tips for play, but now we’ll get into some skill specifics. These are by no means the one true ‘build’ for each agent type; they’re just suggestions for preferred abilities based on my experience finishing the game.

Every class can boost their health and weapon accuracy. I didn’t tend to do this a great deal, because skill points can be better-spent elsewhere. Once you’re equipping agents with armour and shields, a slight health boost doesn’t seem all that important. And while accuracy is nice, there are gear and cybernetic augs that can take care of this too.

If you feel like you have a spare point or two to dump then these passive abilities don’t hurt, but they shouldn’t be a priority.

The ‘Pack Mule’ skill can be a bit costly, but sometimes having an extra gear slot on an agent (particularly towards the later game when you have loads of gadgets to choose from) is worth the investment.

If you’re expecting your soldier to see a lot of combat and want them to tank as many shots as possible, the skill combo of Draw Fire and Harden (in conjunction with the best shields and armour you can find) will do the trick.

For more of a damage-dealer, you’ll want Rage and the biggest gun you can afford. I’d recommend everybody put at least one point into Explosives Specialist, because this unlocks grenades for everyone. Always useful when you need a quick, loud exit or entrance.

Don’t overlook Hardwiring if, like me, you’re generally going for the stealthy approach. It’s a quiet, straightforward way to shut down generators which can power anything from automated turrets to electrified zip-lines. A soldier with a decent Hardwiring skill can really pave the way for your sneakier agents.

Leadership seems pretty essential. It gives every agent more energy (used for sprinting and most abilities) and reduces all cooldown times too.

For anybody who wishes Satellite Reign had a pause function, Team Stims are also a must. They effectively become your pause key, allowing you to think for a while about your moves and positioning. Very helpful for those who want to take all four agents into combat on a regular basis.

If you’re not so bothered about having a pseudo-pause, Field Medic is a solid investment. Another (mostly) passive ability, this one improves squad health, makes health recharge a little quicker and makes any med-kits you have work better. You can also activate nano-bots for some energy-based healing.

Support gets the first level of World Scan as a freebie, so you don’t really need to upgrade that further unless you feel the need for a larger radius (which can be helpful) or price discounts on additional civilian information (not so vital, as the costs are pretty low to begin with).

Like support, the hacker gets some free skills. You’ll start with level one in both Hacking (well, obviously) and Hijack. I found both of those pretty invaluable, so I’d recommend dedicating yourself to boosting them.

Hacking will get you into (and out of) most compounds, and enable you to disable cameras, turrets and all sorts of unhelpful obstacles. You’ll also need it to siphon money from ATMs. Level one will get you into quite a few, but the higher paying machines require a higher skill level. Aim to have at least level two (preferably three) by the time you’re out of Downtown.

Hijacking, meanwhile, can turn even the angriest guard (or drone) over to your team. If a guard is calling in an alert for reinforcements, initiating a Hijack will put an instant stop to it. Much more efficient that trying to whittle down his health in time.

Hijacked guards can be used as extra muscle, a way of getting a door open without needing additional hacking, a distraction, assassins, and any number of other useful roles.

Master Technician will give you some nice boosts if you’re going all-in with laser weapons, and is useful once you’re rocking some shields too. A single point in Drone Puppeteer gives the hacker an attack drone buddy that can help to keep them alive, so that can be worth it once you’re satisfied with your Hacking/Hijack abilities.

Your number one stealth performer. Pick up the first level in Master Thief when you can, because this will let the infiltrator use zip-lines without risk. Further points down this route will net you slightly larger amounts of cash when you send the infiltrator to raid facilities.

After you have a point in Master Thief, start pumping them into the Cloak skill. A level four cloaking skill (especially when combined with a high Leadership support) can make your agent invisible for a pretty substantial amount of time. Perfect for wandering around compounds and tampering with things uninterrupted and unseen.

If you fancy being violent as well as invisible, the Melee attack can deal large amounts of damage in one blow. Very useful for one-off assassination targets, but not so great once you start encountering enemies with armour and shields. Its usefulness degrades in the later game.

Master Assassin, meanwhile, is for those of you who want to set the infiltrator up in sniping spots and get even more damage out of that rifle.

Armed with this knowledge (and, more importantly, with some powerful plasma weapons), your agents should be more than ready for a violent corporate take-over. Remember: you can achieve anything with a little bit of workplace anarchy.