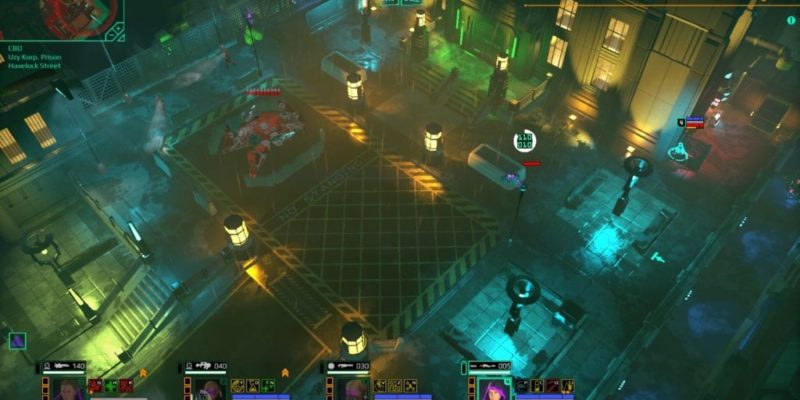 Syndicate (1993) was the game which went all-out with Bullfrog’s oft-repeated theme of amorality, and is rightly regarded as one of the studio’s most enduring titles. In Theme Park you were shamelessly manipulating park visitors, and throughout Dungeon Keeper you were messing with traditional fantasy heroes; but Syndicate had players seeking world corporate domination through intimidation, assassination, and a long-lasting love affair with miniguns.

While the sequel Syndicate Wars (1997) tends not to be so universally praised, it continued the tradition of trench-coated ‘agents’ exerting boardroom dominance on the blood-soaked, neon streets. The influence from Blade Runner, Snow Crash and any number of other 80s-90s cyberpunk media was obvious, and welcomed wholeheartedly by an overlapping videogames audience.

Sixteen years later, in 2013, Syndicate Wars’ Mike Diskett and the 5 Lives Studio raised £460,000 GBP on Kickstarter to make a spiritual successor in the form of Satellite Reign. 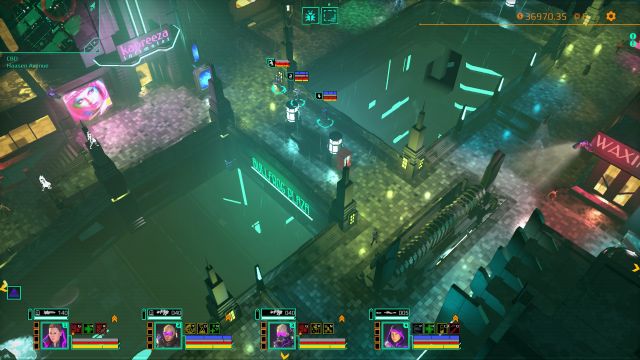 The influence is very much acknowledged, as ‘Bullfrog Plaza’ would suggest.

Its oppressive, corporate-controlled city and real-time agent heists are the best kind of homage to a beloved classic; neither slavishly devoted to the older game’s mechanics, nor such a radical departure that you wonder why the Syndicate name was even used in the first place (hello there, EA).

Satellite Reign evokes plenty of Syndicate through tone, atmosphere, and activities like kitting your agents out with the latest and greatest cybernetic eyes. But it also makes meaningful alterations to familiar aspects and brings plenty of smart ideas of its own.

The most significant of these is the introduction of a pseudo-class system for your team of four agents. In the Syndicate titles, all of your team were blank slates, ready to be fashioned into ever-more-unstoppable cyber-soldiers. Here, there’s one soldier, a support agent, specialist hacker and an infiltration expert. This allows for a bit more nuance and diversity of approach to missions (Syndicate was pretty much always ‘go loud’), and in the early game at least makes Satellite Reign feel a little like a more forgiving version of another older title: Commandos.

Like that game, the abilities in Satellite Reign guide your methods of busting into (and out of) the secure compounds dotted around each of the city’s four major districts. Though later devices and augmentations allow for abilities to be shared among agents (a hacking proxy, for example, can turn everyone into a hacker), at first you’ll need to play each member of your team to their strengths. 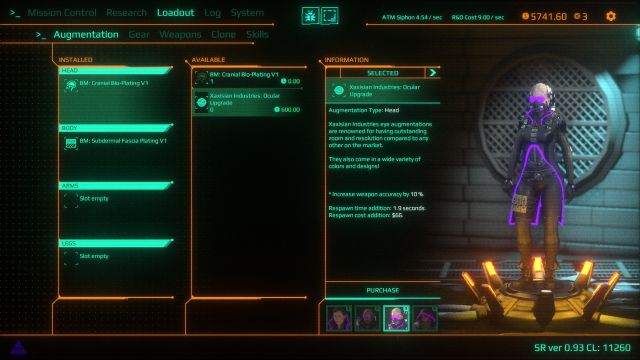 The finest cyber-agents money can buy.

A typical raid involves casing the outside of your planned target (perhaps also employing any knowledge you’ve gained by bribing a guard or former employee), and figuring out your best route in and out. There might be a side door with fewer guards, leading handily to a zip-line that your infiltrator to use to glide into the main compound vault. But that might leave your lone agent trapped behind a door which only your hacker can unlock, which means either sending the hacker in too (on a risky zip-line trip that they might fall from), or composing a more elaborate plan where your soldier causes a distraction at the other end of the facility. With that window of opportunity, both hacker and infiltrator might be able to just waltz in un-opposed. Assuming, that is, nothing goes wrong.

Some of the greatest moments of Satellite Reign revolve around a heist being pulled off perfectly, or salvaged from the brink of disaster by an on-the-fly ‘Plan B’. The various banks, storage warehouses, prisons, and corporate compounds have been cleverly designed to always allow multiple points of entry and a fair amount of freedom in how they’re tackled.

Fortuitous (or planned) emergent events can play a role too. Certain factions within the city do not get along; so when a team of agents leaves a tell-tale body at the doorway of a storage facility protected by a private militia, the nearby district gate security guards can quite easily jump to the wrong conclusions. After the laser fire had subsided, it was no bother at all for an agent or two to slip inside, step over the bodies, and retrieve what they were after. 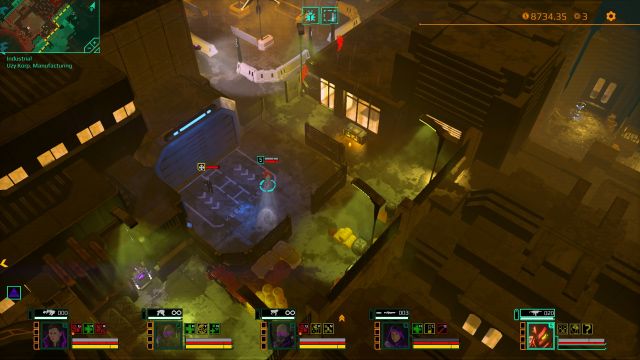 Here, I’ve taken over a guard’s mind and used him as a proxy assassin.

The infamous Persuadatron device from Syndicate (which could brainwash civilians and guards alike into mindlessly doing your bidding) has been toned down slightly here. This means you don’t get a huge flock of people following you around any more (a bit of a shame, but understandable), but can instead instruct the hacker agent to control people through their neural chip. As his ability is improved, more guards and drones can be controlled at once. Handy for using security personnel to do your dirty work for you, or open up gates with their clearance.

Mind-hacking people is also necessary to keep your team of agents in top shape. Every time one of them dies, the agent is re-cloned; but doing this degrades the quality of the original. In order to maintain some agents with a healthy set of bonuses, it’s necessary to identify and brainwash a few talented civilians or guards and send them off to your sinister cloning basement.

Raiding compounds in Satellite Reign isn’t just done for a lark, it also gives your team tangible bonuses (like slower reaction times for cameras if you raid the local surveillance building) and prototype gear. Prototypes can be equipped immediately, but are lost if the agent dies. Better to invest the time and money into researching and mass-producing the gear instead. Superior weapons and body augmentations mean your team can tackle more difficult heists, and in turn be rewarded with things to help them with the next job.

The game’s progression is nicely paced, keeping you fairly restricted to the Downtown district at first as it forces you to ‘learn’ your agents, but gradually expanding to allow you to pick and choose missions from multiple open districts. By the time your team reach the Dracogenics Business district you’ll find yourself able to casually blow open and stroll inside almost any gate you choose, because nobody (final ‘boss’ area aside) is realistically going to be able to stop you.

Not everything in the city can be destroyed, but gates blow up in a satisfying manner.

Cars are present in the Satellite Reign city too, but (sadly) can’t be stolen for a spot of compound ram-raiding. It is possible to blow them up, though. Syndicate’s entertaining flamethrower also seems to be missing, unless it’s a reward for one of the missions I didn’t attempt in my 20-some hour playthrough.

This review is based on the latest Early Access build (said to effectively be the same as the final release, baring some last-minute bug fixes). There were a few ‘work-in-progress’ remnants, like GENDER_NAME% in mission briefings, and the curious tendency during one rescue mission for the agents to persistently gun the person down and fail the retrieval. Any escort-based tasks in general seemed to be a little dicey, with another prospective rescue getting permanently stuck inside a vent at one point.

Pathfinding (for both your agents and AI) can be a touch wonky as well. It’s best to guide your team with clicks that aren’t too far away on the map, or they can get a bit lost of stuck. Enemy guards sometimes decide to spin in circles at a compound gate, or endlessly run back and forth through doors. The final (boss encounter) area seemed especially vulnerable to pathfinding troubles, and felt a bit weak in comparison to the rest of the game. Like Deus Ex: Human Revolution’s boss fights, it throws out a lot of your stealth options and just forces a battle of fire-power between a host of foes and some frame-rate crushing weapon effects.

Performance in general was a little bit iffy on my older i3-2100 CPU. Scalable graphics options (civilian density, AA, post-processing effects and the like) helped, and I ended up with a playable 30fps average on tweaked medium settings. Those with superior CPUs (an open city built on Unity seems to be rather CPU-heavy) have reported much better performance, but keep in mind that it can be demanding on older machines. 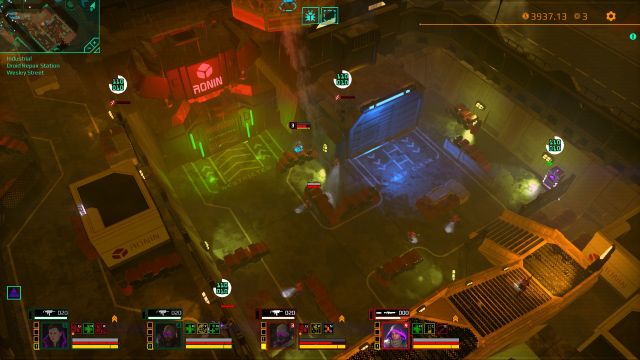 Another slight annoyance is that guard vision cones are actually larger than their search-light indicator.

A lot of those issues could be improved or entirely addressed by launch, as updates during Early Access have made large strides in patching up bugs. Some will inevitably remain, but events suggest Satellite Reign will only continue to improve from the point it’s at right now.

That’s pretty tantalising, because the game in its current state already feels like the contemporary take on Syndicate promised by the initial Kickstarter campaign. The amount of freedom afforded to the player in planning and executing your corporate heists is laudable; and slightly ironic, given the oppressive nature of the cyberpunk city’s densely policed districts. In all, Satellite Reign’s deft combination of Syndicate-inspired mechanics and smart new ideas make it a swaggering boardroom successor.

Pillars of Eternity: The White March – Part 1 Review for PC

By Damon Apelt1 day ago
Reviews