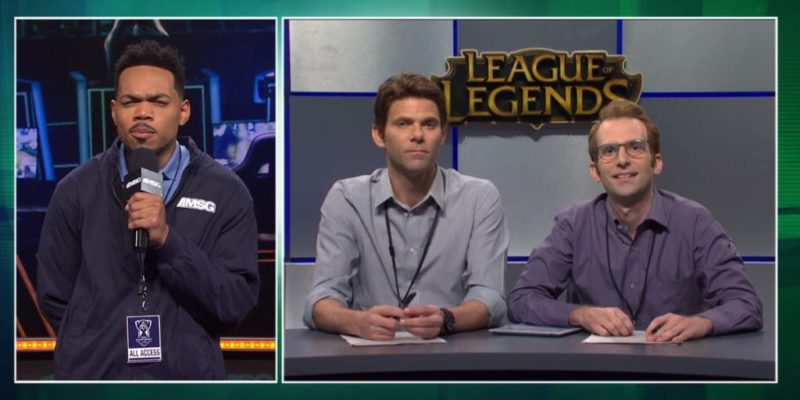 The sketch comedy show Saturday Night Live has been on the air for more than 40 years. Thanks to the varying political climate and, frankly, society in general, there never seems to be a shortage of content for its writers. Almost anything is fair game, including video game culture. Esports has grown into a visible force, gaining almost unavoidable popularity. The swift uprising has also led to confusion by those not directly involved. This is one reason that the Saturday Night Live sketch surrounding the topic works so well.

Do you play League of Legos?

The sketch works for numerous reasons. Even thinking back to my childhood, my mom referred to practically all my games as a “Nintendo.” This only goes to emphasize the generational divide that happens in society when an older generation of people stop becoming invested in the newest technology crazes. And of course, this tees up content for Saturday Night Live to make fun of. The fake sports announcer (Chance the Rapper) refers to League of Legends as League of Legos numerous times in the sketch, further showcasing its foreignness.

For me, an example of foreignness is the app TikTok. I mean, what even is that? I guess I’ll just stick to the same old Vine compilations I’ve been watching for the last five years. Ah, the classics. Another reason is that, even in circles where esports is just an off-chute of video games, it’s hard to really explain the popularity. Personally, I’ll watch a few things here and there. But the rest is far beyond over my head, which makes this sketch completely relatable even if I’m a “gamer.”

Not their first rodeo

This isn’t the first time that the writers for Saturday Night Live have poked fun at video games and its culture. Actor Pete Davidson threw on an HTC Vive and played a parody of Tom Clancy’s: The Division 2 just a few months back.

In the sketch, Davidson becomes visibly frustrated as all of the NPCs in the game want to talk his ear off instead of letting him just grab a gun and starting shooting stuff. Although a parody, this scene is all too familiar for those who’ve played any first-person shooter on the market and only have limited amounts of free time to just kick back and play something.