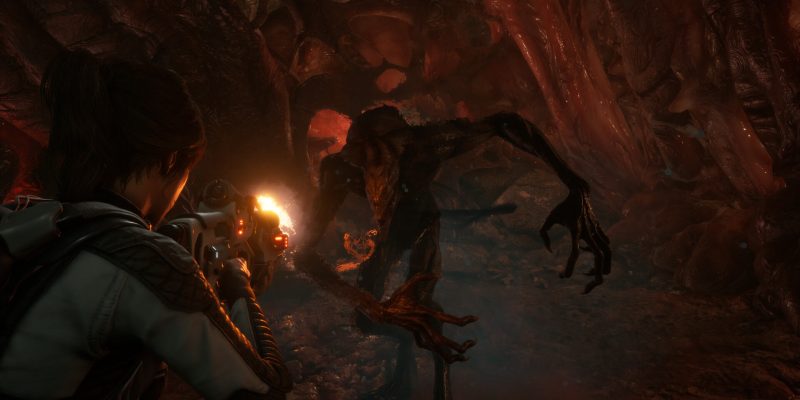 Geoff Keighley’s Opening Night Live event during Gamescom yesterday included plenty of new trailers for games that are in development. One of these was for Scars Above, which is a new sci-fi third-person action game being developed by Mad Head Games. Scars Above was originally announced as part of a new game line-up from publisher Prime Matter, which is a “premium gaming label” under the banner of Plaion (previously known as Koch Media). The new trailer for Scars Above can be watched below.

The new Scars Above trailer shows some brief cutscenes involving a crew on a starship, as well as the main character exploring an alien planet and coming across puzzles and enemies. The developers describe the game as “a challenging sci-fi third-person action-adventure shooter combining the rewarding feel of overcoming difficulty with a compelling and intricate story, set in a mysterious alien world to explore.”

Sci-fi shooting is in right now

Scars Above looks promising, and it reminds us of other recent sci-fi action games with horror themes, such as Returnal. The plot of Scars Above revolves around a giant alien structure called ‘The Metahedron’ appearing above Earth. A team of scientists and engineers called The Sentient Contact Assessment and Response Team (SCAR) attempt to investigate it, but find themselves flung across space towards a mysterious alien planet.

Players will take on the role of Dr. Kate Ward as she finds herself alone on this new planet. Her goal is to find her crew and solve the underlying mystery behind what just happened. You’ll make use of various devices, items, ranged weapons, and melee attacks in combat. But there is a stamina meter to be wary of, and using it for running and dodging will be crucial. Exploiting enemy weak points and using elemental attacks will also be an important part of creating strategies to take down enemies.

A pre-alpha gameplay demonstration of Scars Above is also available to check out on the publisher’s official YouTube channel. There is currently no release date or window for Scars Above, but the trailer ends by saying it is “coming soon” to PC.

Where Winds Meet throws you into a collapsing Chinese kingdom