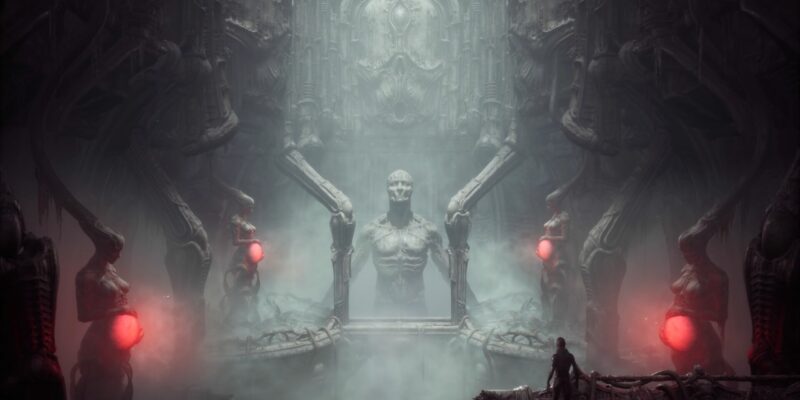 Fans of body horror rejoice (I guess?), Scorn has been confirmed for a release window of October 2022. That is, it’s confirmed for all those who plan on picking up the game following its developer’s recent meltdown. The game was previously scheduled for a December launch. But back in November, Ebb Software announced a delay tinged with, well, scorn. Regardless, the game is still on track, and will appear on PC in less than a year.

Scorn has been a very long time coming. First announced with a Kickstarter campaign back in 2014, it failed its initial goals. It did, however, find an investor, and Ebb powered on for quite a few years. At last, everything seemed to line up, and the team revealed a PC launch during an Inside Xbox stream back in May this year. It did get delayed, however, proving that the road of development is long, windy, and full of speed bumps.

But, at last, Scorn got a release window paired with a trailer late last week. To celebrate, Ebb published a series of questions and answers about the team, as well as the game’s gruesome art style. According to the developer’s CEO, Ljubomir Peklar, Scorn is currently 75% finished. The path forward will be all about getting the rest of the content in place, along with squashing bugs.

Scorn is now set to creep everyone out, just in time for Halloween. The game itself is described as “biopunk,” featuring loads of body horror and gore. Its work is twisted, almost as much as the creatures that inhabit it. We got a glimpse on how it would play, and it’s definitely something that’s hard to tear your gaze from. I’m still not entirely sure what it’s all about, but I’m looking forward to knowing once it finally lands.

Scorn is coming to PC for an October 2022 release. We’ll get a more accurate date later down the line.