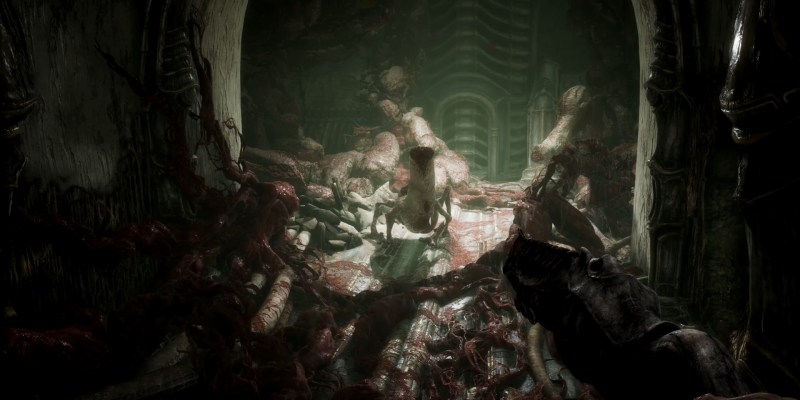 Scorn is a first-person sci-fi horror that has been years in the making. The first reveal for the game came back in November 2014, showcasing pre-alpha footage that would make Ridley Scott (Aliens) proud of its atmosphere. Since then, there have been parceled updates via its developer’s YouTube channel. However, the most recent Scorn trailer piggybacks on the reveal of Xbox Series X gameplay, showing off more grotesque weapons and enemy characters. At the least, the new gameplay provides baseline expectations for PC players when the game launches in 2021.

When you take a look back at some of the early trailers for Scorn, it’s easy to identify some of the improvements made since the pre-alpha. Textures are quite literally more fleshed out, and a number of audio improvements can be heard. One such example is the squishing and squashing of something biological under the feet of the game’s protagonist. There also seems to be improvements to Scorn‘s lighting, something ray-tracing will undoubtedly influence. It should also be noted that the game runs on the Unreal Engine 4, as it missed the boat on the 2021 launch of the Unreal Engine 5.

Ebb Software notes, “The game has been running on Xbox Series X for only a couple of months but has already reached parity with high-spec PC configurations.” This might bode well if you’ve been holding out for the new AMD 6000 Series or RTX cards.

The new Scorn gameplay shown in the most recent trailer showcases an extended look at the level and gameplay previously seen. There are also a variety of new creatures — if you can even call them that — now clinging to walls and obstructing your focus as they squirm about. The gameplay also shows a few new weapons that can be wielded in order to splatter those said creatures and paint the floors with their blood. And hey, you can even thrust your gun-thing into small pillars to unlock access to doors and new areas.

Scorn is currently being developed by Ebb Software and does not have a release date at this time. If you were looking forward to a spooky, Halloween-y title to play this year–you’re out of luck here. However, the game does have an anticipated release in 2021. In the meantime, you might check out something like Amnesia: Rebirth. 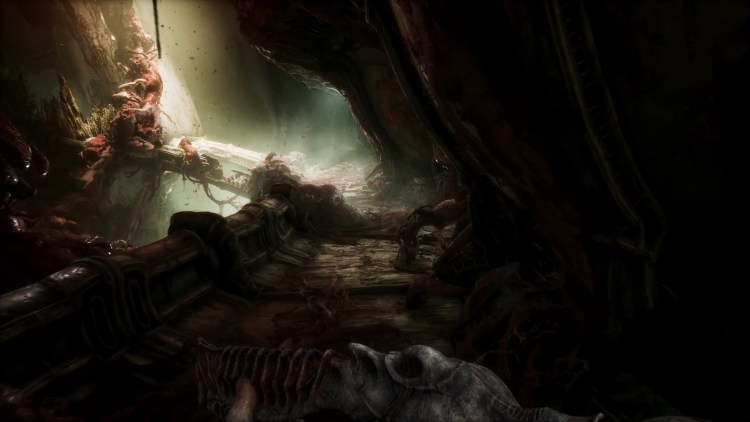