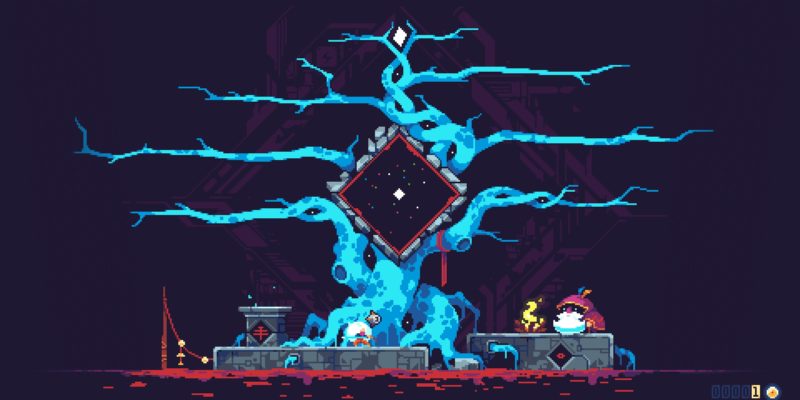 I love it when games give you a lot of mobility in mid-air. The feeling of controlling a character as they effortlessly move without touching the ground is something I always look forward to when available. ScourgeBringer, a brand new rogue-lite entering Early Access on February 6, offers said high-flying action in spades. Let’s take a look at how it plays and what it has to offer to see if it’ll be your next rogue fix.

ScourgeBringer begins with a short tutorial that sets up the basics of the game’s controls. You play as Khyra, a young woman with a sword and gun that has to fight old machines to learn about the past in a post-apocalyptic world. Khyra can double jump, dash infinitely, do light and heavy slashes with her sword, and shoot her equipped gun. You’ll mostly be using her dash to move from enemy to enemy so that you can attack them in the air with her sword.

The acts of dashing and slashing are quick, responsive, and quite entertaining. ScourgeBringer completely nails the sort of twitchy character action it’s going for, which is a definite boon. As Khyra hits foes, she’s able to regenerate bullets for her gun. On a gamepad, the gun can be fired either with the right analog stick or the right trigger. I prefer the trigger for this, as it auto-aims and the stick just doesn’t have as much accuracy as you’d want. 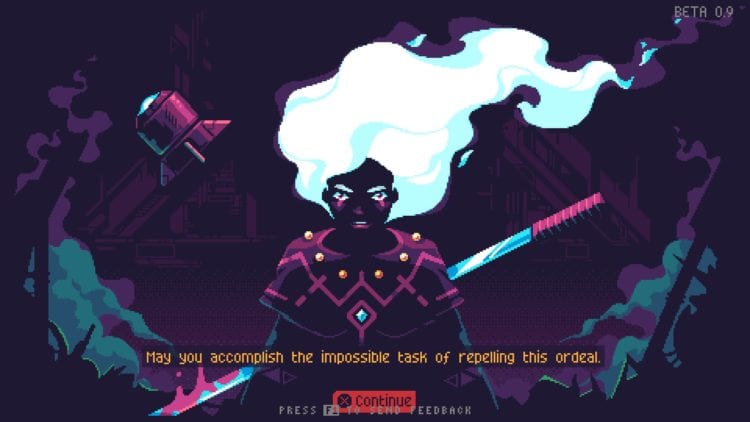 The intro cutscene sets the story up. I have seen it twice but hardly remember it at all. Oops.

Enemies attack by striking at you or firing projectiles. In either instance, a small exclamation point flashes over them before they do. Physical attacks are simple enough to dodge– simply dash in another direction and you’ll evade harm. But enemies firing projectiles is a completely different thing.

Gotta get outta the way

But I feel like dodging projectiles is problematic. Almost all of the difficulty in ScourgeBringer comes from enemy shots, but avoiding them is extremely hard in most scenarios and flat-out impossible in others. As you don’t typically have many available shots in your gun at any time, you’ll mostly be using your sword for the majority of your attacks. But if you’re slashing away at an enemy and the exclamation point appears over its head, dashing away will often not help much.

If you’re already that close, chances are you’re just going to take the shots directly. You can dash away, but they get fired off so quickly and densely that there often isn’t a way to avoid them. The dash is fine as a mechanic, but it lacks any of the specificity that would be required for it to be useful in regards to bullet hell shenanigans. As such, there’s just no real way of dodging many attacks. 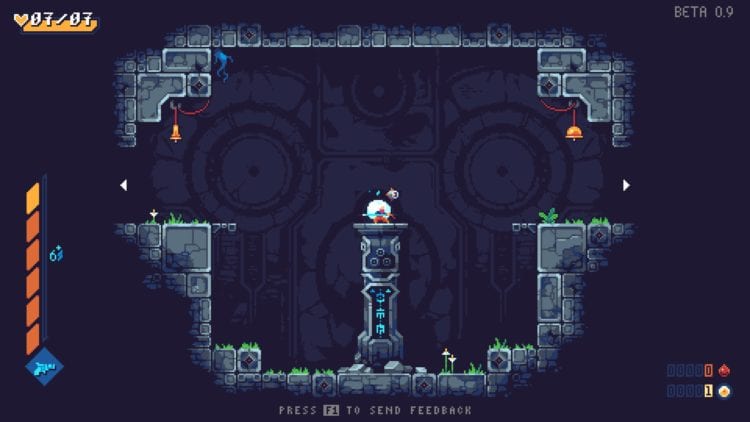 Should I go Skinny Bell Lane or Fat Bell Avenue?

You can unlock a skill after a little while that lets Khyra’s heavy sword attack deflect a couple of bullets. But if there are more than a couple of bullets in an enemy’s volley, you’re going to possibly be hit with the others immediately after deflecting. And enemies very frequently fire considerably more bullets at you. In practice, this generally means that deflecting doesn’t offer any more of a chance for you to reduce damage taken than simply trying your luck with the dash. And the dash offers no invincibility frames. These choices also don’t work well in tandem with how stingy ScourgeBringer is with health.

To begin with, Khyra starts with a set amount of health that can be upgraded via the skill tree. After purchasing the first two upgrades, that adds up to 10 health overall. Each hit she takes reduces that by one. But healing items are not common. Each stage has a single shop where you can trade blood droplets discharged by foes for items. There is a healing item that can restore three units of health, but you’re more likely to find ones that can only heal one or two. Enemies will also rarely drop health items.

Making things trickier is the fact that Khyra can take large amounts of damage in rapid succession. Unless, of course, you come across a rare powerup that reduces invulnerability time after getting hit. Normally, though, I found myself sometimes getting hit three times by a single volley of bullets. It’s very demoralizing to lose nearly a third of your life because an enemy attack was practically unavoidable. 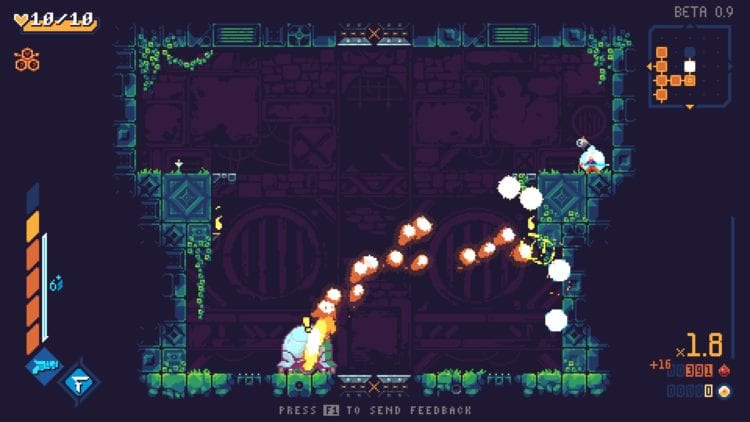 When you fight one of these guys in this one specific room, they’re a cinch. When you fight them in a smaller room without this kind of cover, though, you’re probably gonna get hit.

What’s more, you have to beat each area’s boss to get to the next one, which will leave you with whatever health you had after defeating them. Each time I beat a boss, I felt like I had practically no chance of survival, as my health would be nearly empty with no way outside of a rare power-up of coming close to refilling it. I can appreciate the fact that the game wants to be challenging, but making it difficult to both avoid damage and heal up after makes ScourgeBringer a bit of a pain.

The rogue-lite structure here is familiar. You start a run by jumping through a portal, which takes you to the first area. Each room has a static camera that is reflected in a map in the upper right-hand corner. Once you enter a room, enemies spawn. Defeating them all opens the doors and you can choose where you’d like to go. Each of these areas is, naturally, randomly generated.

Your goal in each area is to simply beat the boss and move onto the next one. But the boss door is locked until you defeat that area’s guardian. So you need to search around for the guardian, beat them, and then find the boss door. Each time you beat a guardian or a boss, they drop skill items that you use to purchase new skills from the skill tree. Many of these are very useful, such as the aforementioned health increases. Plus, they unlock new abilities, such as a super attack that can attack enemies in a specific area and erase onscreen bullets once charged. 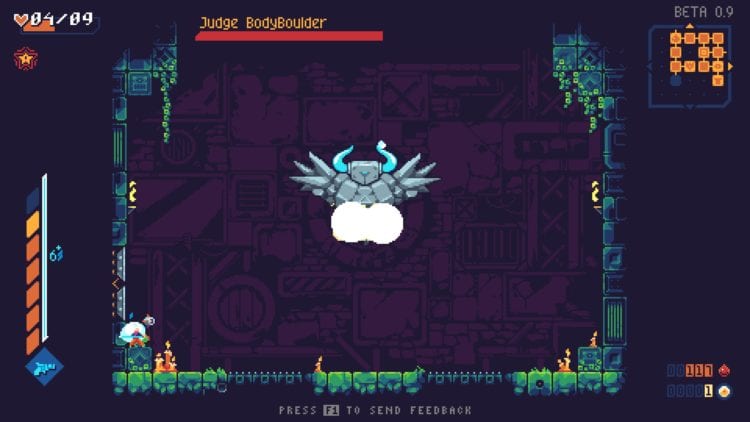 On top of that, some pillars show up occasionally that grant power-ups for that run. I already mentioned the health refill one and the invulnerability timer, but more common ones grant you a 5% bonus to either your damage or shop prices for every block of health you’re missing. You’ll also almost always find one that allows you to get your combo meter up to three as well. The combo meter is unlocked on the skill tree and increases the amount of droplets enemies drop. It also halves every time you get hit.

Bang for your buck

As ScourgeBringer is just now entering Early Access, it’s naturally a bit light on content. The game currently offers three areas out of the six total that is promised. People who click with the game right away will probably be able to do this within a few hours. But it is rather difficult, so that number can easily go higher if you’re having a hard time with its combat. That being said, runs in a rogue-lite aren’t meant to take too long in the first place.

But, I will say, the game makes poor use of its rogue-lite nature. In most games, the different powerups and mutators you find can greatly change the experience. But those are less common in ScourgeBringer. For the most part, I found my runs to feel very, very samey, which made going through that first area, again and again, get old rather quickly. 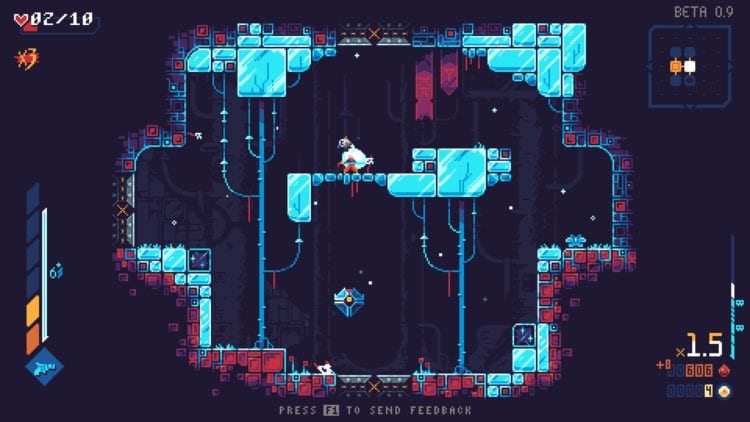 Behold! The first screen of the second level with only 20% of my health remaining! What could go wrong? (Spoiler: everything. Everything can go wrong.)

The powerups you find simply don’t change the gameplay in any meaningful way. The shops also sell different guns that are stronger than your starting pistol, but they’re very expensive and you’ll likely opt to purchase the tiny slivers of health that the game offers instead.

It feels like the game needs some reworking to be truly worthwhile to me. But the combat does feel pretty great. The areas and enemies that inhabit them aren’t very interesting or memorable however, even if the bosses have solid sprites. If you’re looking for a new 2D rogue-lite, I’d say keep your eye on this one and see how it changes when it’s done. 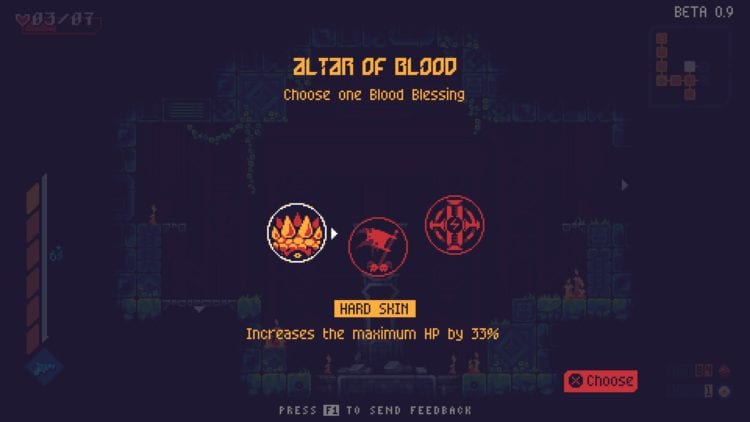 Quite literally the only time I saw this powerup within a few hours of play. Still, I always hope for the health refill one. Fat chance, right?