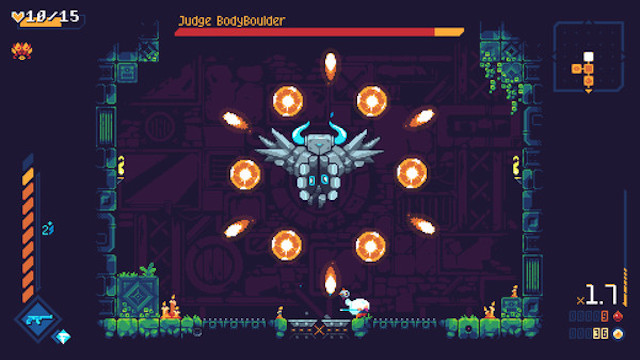 Those of you looking for a fresh rogue-platforming game will want to pay attention to this forthcoming scourge. Or, rather, ScourgeBringer. The publishers at Dear Villagers announced that the game will make its debut on Steam Early Access on Feb. 6. Those interested in adding it to their wishlist can do so on this page. In addition, it’ll also be available on Xbox’s Game Pass service for PC as well, on the same day.

What does ScourgeBringer have in store for action fans?

Reaching back to the good ol’ days when rogue platformers were just getting started, ScourgeBringer brings fast-paced action. The game follows an unlikely hero named Kyhra as she explores the secrets of a mysterious Eldritch monolith. Before it can destroy the world, she must fight back with the help of a trusty combat drone. Shoot and slash your way through a dungeon with conditions that change up frequently, while also dealing with ancient machines and menacing bosses.

What’s more, the game comes with a select number of pre-built challenge rooms, in case you need to hone up those skills of yours.

Along with a number of secrets and hours’ worth of gameplay, ScourgeBringer also features an electrifying soundtrack from Joonas Turner. Some of you may recognize his work from previous games like Nuclear Throne and Downwell. If you want a sample of what his latest soundtrack has to offer, be sure to check out the trailer below.

Bringing the right mixture of old-school action with new-school design, ScourgeBringer could potentially become a big indie hit when it arrives in early access in a couple weeks’ time. You can learn more about the game on Dear Villagers’ official web page, as well as on its Steam page. There are many rogue-lite platformers on the market, but this one looks like it’s trying especially hard.

Taur tees up its hectic gameplay in a new trailer