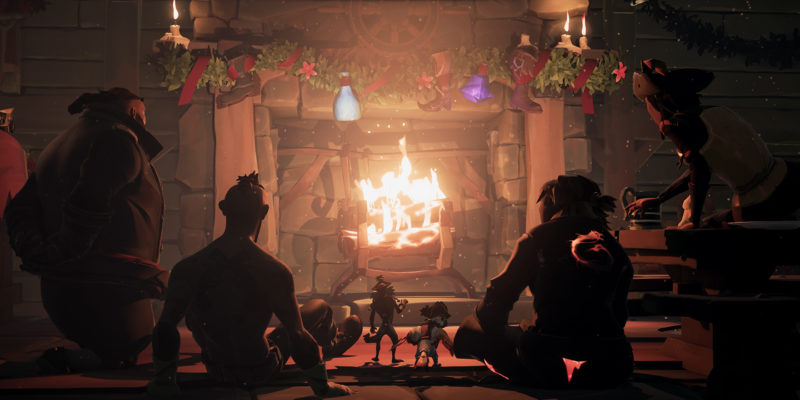 The festive season. A time to get together with family and friends and… take to the high seas to loot and plunder. Obviously. So, gather your crew, because Sea of Thieves has just released its latest free content update, the Festival of Giving.

October brought the spooky Fort of the Damned, a challenge appropriate for Halloween time. But December provides us with a more festive update. In the Sea of Thieves Festival of Giving, you need to track down and retrieve shipments of gifts lost at sea to earn rewards. As with many festive quests, you need to visit a tavern to get started. Talk to Stitcher Jim and he’ll set you the task of delivering the recovered gifts to the Masked Stranger at The Reaper’s Hideout in return for valuable Doubloons.

The Festival of Giving also has its own advent calendar. However, it doesn’t run the full 24 days leading up to Christmas. From December 12 – 24, players will receive daily in-game incentives.

For players who get the gift of Sea of Thieves this festive season (and beyond), the Festival of Giving update adds the Maiden Voyage to the game. This introductory adventure will help new players (and those in need of a refresher course) find their sea legs. It’s an ideal first adventure in a relatively safe place where you can hone your skills and be all the pirate you can be.

For more experienced sea dogs, the Maiden Voyage is a chance to check out an unexplored island hidden beyond the Devil’s Shroud. It will also let you meet the spirited Pirate Lord, plus unlock new Commendations and exclusive cosmetics.

There be presents in them there shops

Fresh goods are smuggled into Sea of Thieves each month. Some make their way to the Pirate Emporium, while others wind up on the Black Market. With the latest content update, both stores have been restocked. The Festival of Giving also sees the Pirate Emporium having its first-ever sale. The store is loaded with rare goods, festive treats, and the finest seasonal fashion (for people and pets).

In the Pirate Emporium, you can also find a unique SpecialEffect ship cosmetic. Each purchase of this cosmetic will donate money to the SpecialEffect charity, giving even the hardiest pirate a chance to spread some joy and show their softer side.

A stocking full of other things has also been added to Sea of Thieves with this update. There are some combat balance changes, more Ashen Tomes to seek out, three new Skeleton Lords to battle, and a smattering of bug fixes. You can check them all out in the full patch notes.

You can see all the cosmetics being modeled by the pirates in Sea of Thieves‘ Festival of Giving video. It also gives you a whirlwind tour of all the new content that’s surfaced with the latest patch.

Sea of Thieves can be purchased for PC from the Microsoft store, or it can be picked up as part of the Xbox Game Pass.