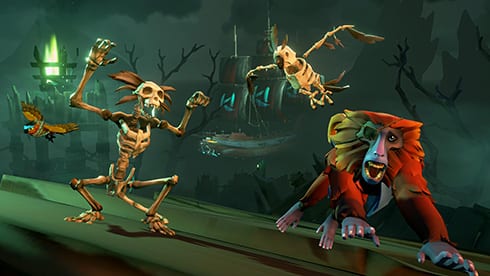 Avast, pirate fans! You’ve got a spooky update awaiting ye in Sea of Thieves for the month of October. Microsoft and Rare detailed the update, which is available for both the Windows and Xbox One versions of the hit game. In it, players can take on the Fort of the Damned.

This mysterious location holds the biggest Skeleton Fort challenge to date, but also some huge rewards in return. This includes a guaranteed Chest of Legends. Keep in mind that you do need to meet certain in-game requirements to enter the fort. Once you do, however, you can take on the challenge as many times as you want to complete it.

What else is in Fort of the Damned?

With Fort of the Damned, players will also have the chance to find Ritual Skulls, claim the Flames of Fate, and then take on the likes of Sloops, Brigantines, and Galleons. Don’t worry about it going away after Halloween, though. Rare has made it clear that it will stick around long after the spooky event is over.

The update will also introduce Skeleton Pets in the Pirate Emporium, including a cockatoo and marmoset. These will be gone once November 1 rolls around, so shop accordingly. Additionally, in the Arena mode, players can team up together as part of a two-person Sloop crew to take on enemies. Nothing beats a little co-op to get the job done.

Those that prefer to play the banjo with Shanties now have the option to do so. And if you want to upgrade, various stores at outposts will have them on hand. Just bring a proper amount of gold.

Finally, some new cosmetics are now in the game, along with emergent loot locations and a handful of additional Commendations. The update should apply automatically the next time you start it up.

Sea of Thieves is available on Windows PC and Xbox One.

By Steve Clist4 hours ago
News