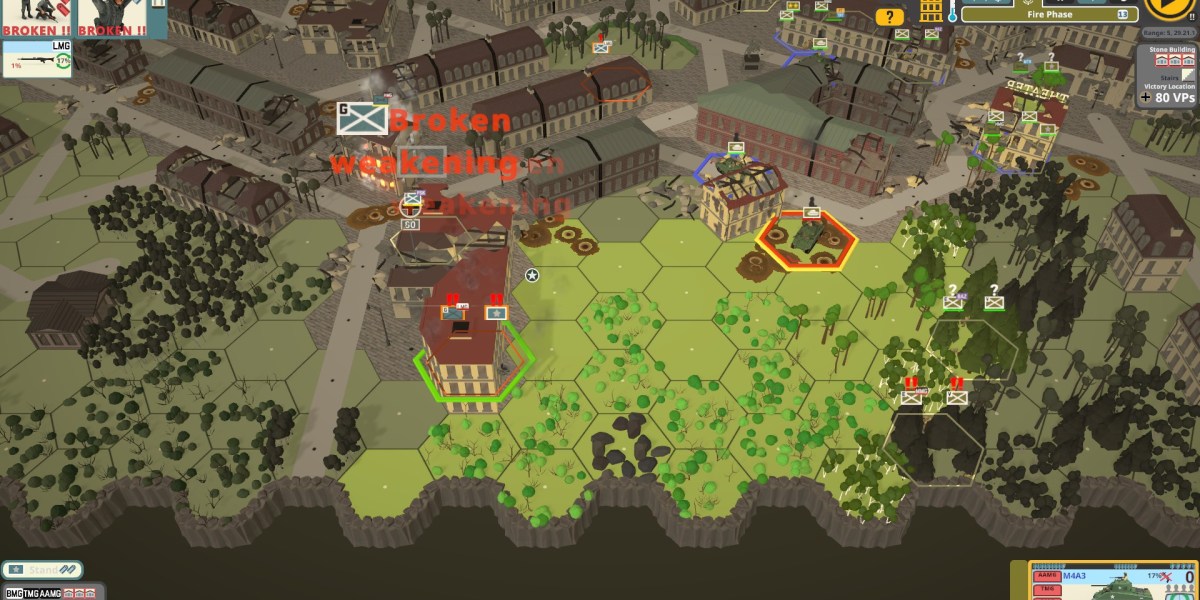 Most World War II hex-and-chit tactics games are easier than Advanced Squad Leader. It really should have a good video game adaptation. We’re probably never getting one, but Second Front is a good alternative. Unlike its many rivals, Second Front is in actual 3D, and I finally got my mitts on the playtest version for impressions.

Second Front doesn’t have a plot I could talk about in the second paragraph. What it does have is more than 200 vehicles and infantry to represent the forces of the US, Nazi Germany, and the USSR at any point of the war.

Building your own front

The five (technically six) missions that the test version of Second Front comes with are a proof of that. The two American missions are both set post-Normandy (desert and Pacific warfare will probably be DLCs), but the German ones range from 1941 to 1944.

Second Front‘s preview version comes with both map and scenario editor. The sixth mission is the one you download from the workshop, and it’s there to demonstrate what you can do with those tools. And the editors are neat! Even without tutorials or documentation, I made a cute little map, and then – via the scenario editor – populated them with units appropriate for July 10, 1944. 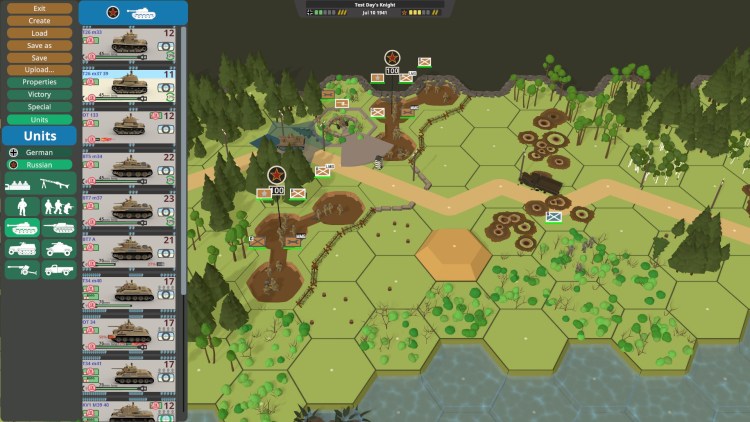 All the terrible designs the 1930s can throw at me.

Yes, the Second Front scenario editor does the historical TO&E management for you. It’s also where you can seamlessly set the battle in a snowy version of the map, toggle ruins, and so on. It’s good to see at this very early stage where load screens still look like they’re out of your first Unity tutorial.

Leading from the front

But back to actually playing Second Front. The units you control are individual tanks and vehicles, squads, half squads, weapon crews, commanders, and heroes. The latter are a genre staple. Basically every hex-and-chit game I’ve played insists on generating heroes when a squad rolls real well on the defense. 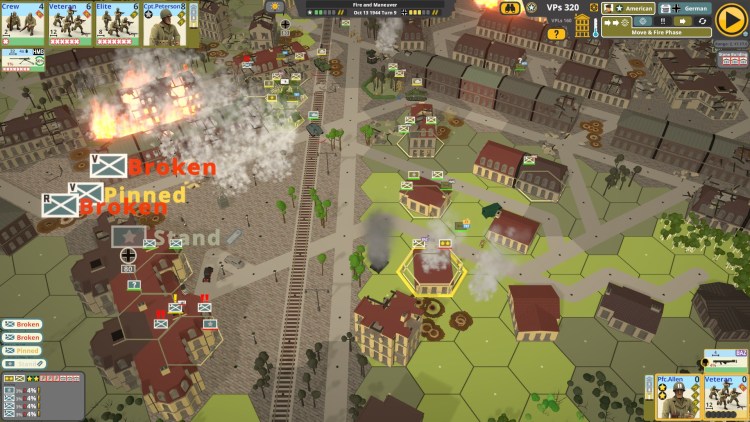 The guys on the left are generating nothing but stains on their pants.

The game is fairly lenient when it comes to movement and command. It shows you movement distances and informs you of movement modes with easy-to understand icons. Infantry can be activated individually or in stacks. Having an officer in a stack improves everything, including movement distance.

Vehicle simulation is detailed: tanks have armor values for the front, sides, and back of both hull and turrets. Some weapons depend on whether the commander is poking his head out of the hatch. Sticking the neck out also increases accuracy and speed on road. This also makes your tank commanders slightly susceptible to getting shot. But even without bullets whizzing past their head, vehicle accuracy depends on whether it’s moving or not, and the fire arc for the main gun is tied to the facing turret. 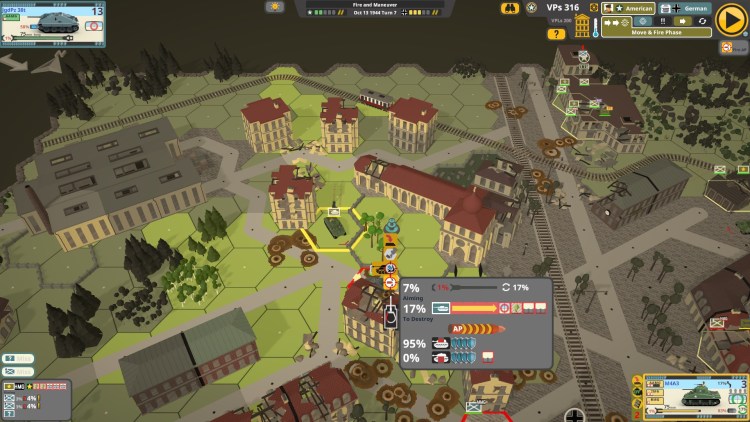 Sure, you can do all that and more in Advanced Squad Leader, but now I don’t have bother with a stack of seven chits or measuring the angle of fire. Plus, Second Front tells me the hit and wounding probabilities – and the factors that influence them. I’m absolutely happy about outsourcing the busy work of keeping the rules straight to the computer.

Speaking of which, I assume that the computer is rolling dice behind the scenes. This can lead to freaky outcomes like critical hits with mortars slaughtering all the units in a single hex. On the other hand, the combo of dangerous dice and terrain mods suitably punishes the attacker. Drawing reaction fire in the wrong terrain (or at a run) can rapidly lead to loses. Move units into a bad position and suffer, because the enemy gets a fire phase right after your move-and-fire. That sort of danger is realistic, even if you aren’t entirely in the dark. You always know where the enemy is, even if you don’t know the exact composition. 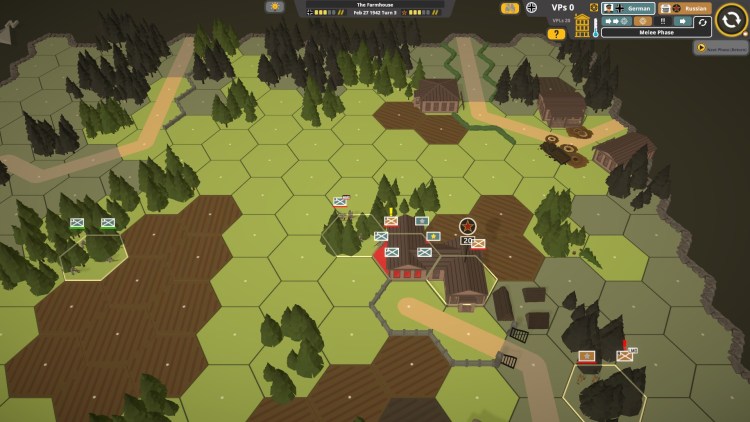 The exclamation mark indicates that the Soviet squad is mildly concerned about being assaulted by five Nazi units.

Most of the shootouts in the Second Front are realistically less lethal. The target unit is more likely to get pinned or outright broken rather than die (unless it’s tank vs. tank warfare). Broken units have their own phase of the turn for retreating, and I think officers tend to go with them. Rallying is much easier when you have some butterbar shouting at you rather than just being alone with your terrified buddies.

Mercifully, unlike in some games, units can auto-rally without such handholding, though it’s much harder to do.

I think I’ve said something to the tune of “mercifully” more than once in this impressions article, and it bears true. Second Front already boasts a lot of quality-of-life features. The basics of the game are easy to grasp, despite the tutorial messages showing a dire need of proofreading. A lot of the information is displayed clearly, and the interface is handy.

The visuals in Second Front aren’t too bad either. The models are fittingly abstract for an indie game, though more could have been saved by not modeling polygonal noses. But that doesn’t matter too much, since you’ll spend most of your time way up in the sky commanding your forces. 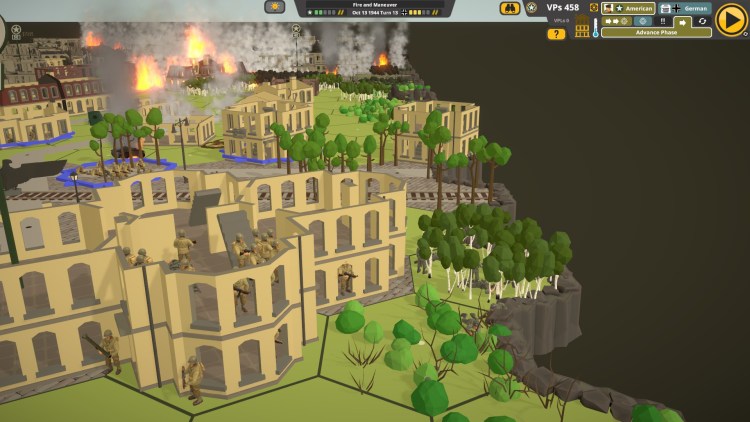 The tank models look good as well, even if the tracers are comically large. The houses might be barren, but the real fun happens when you set something ablaze. First comes the smoke, which spreads from hex to hex. Then houses and forests catch fire and go up in flames, seriously impacting the way you can move around the map.

The start of something

All in all, Second Front is looking promising even at this early stage. Sure, it’s rough, but you can see the that the foundations are sound. With the basic features already there, we just have to wait for the polish and rest of features (like campaigns) to be implemented. Then we can immediately and obnoxiously start bullying the studio to start releasing DLC.

The price of Riot Points is increasing in League of Legends