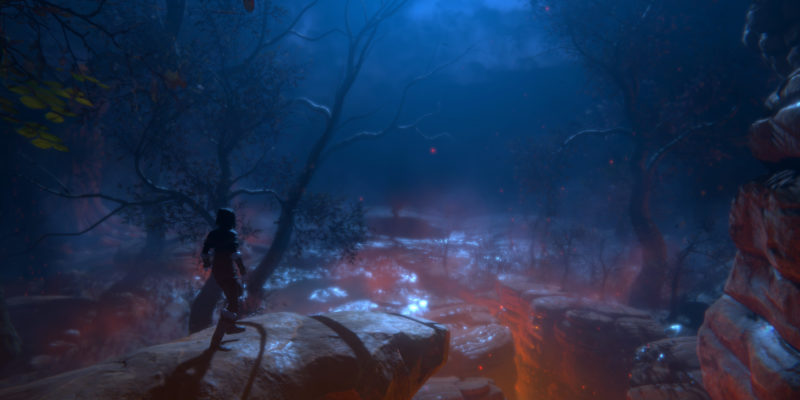 A dying planet and a winding mystery are elements that await in Madlight Studio’s Seed of Life. The third-person action platformer is slated for a release for PC via Steam next year. It’s looking interesting, if a little dark. Alright, the game looks very dark, and I don’t mean the subject matter. True, aliens and dying worlds are tough, but the shadowy world certainly adds a layer of intrigue to the story it wants to tell.

In the game, you play as Cora. Seed of Life tasks you, the last resident of a decaying world, to find the Seed of Life. The world’s sun has darkened, and dangerous aliens fly about in their ships. There is one alien, however, that stands aside from its brethren. Cora is assisted by Nar, a “cute” alien that I don’t believe sees a cameo in the trailer. Shame. I do like myself some cute aliens.

Seed of Life is a semi-open-world game with dangerous landscape. You move through the desolated environments, solving puzzles with the help of Nar. Talismans found throughout the land offer new abilities. You can also upgrade your current items using currency known as Lumium. The developer also promises items that allow you to defy gravity, which should make for some interesting scenarios.

A light in the dark

Seed of Life boasts a lot of different gameplay options. Other than platforming and puzzle solving, there will be some stealth action involved. Alien beings called Namurian Shadows roam about. And it sounds like the best way to dispatch said baddies is with stealth combat, though the trailer above doesn’t show an example of this.

“We can’t wait for fans of platformers and action-adventure games to begin their journey in the world of Lumia next year,” said Daniele Falcone, general manager at publisher Leonardo Interactive. “We’re working hard to make sure our wonderfully strange universe filled with intriguing mysteries, cool abilities and imaginative extraterrestrials is properly brought to life soon.”

The game is scheduled for a release early next year on Steam. There’s already a page for it, offering more information as well as system requirements.