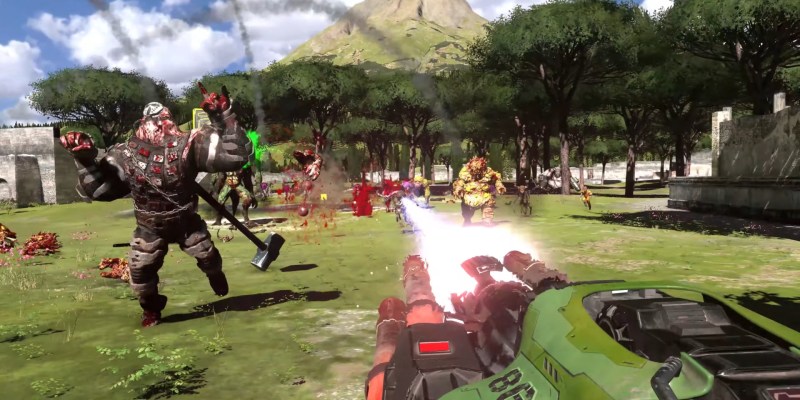 Serious Sam 4 is nearly here, almost a decade after the series’ third entry. To celebrate the road to release, developer Croteam and publisher Devolver Digital have started a countdown to launch video series. Episode one is now live, detailing what Croteam went through to create Serious Sam. Of course, there are also some welcome gameplay snippets thrown in there to tease Serious Sam 4 a little bit more.

Chief Creative Officer at Croteam, Davor Hunski, spoke about the sacrifices made to create Serious Sam. The franchise started out life on the back of the developer’s parent’s money, before the team could find a publisher. Hunski expressed how tough it initially was to find funding, and that community enthusiasm sealed the deal. When gameplay of Serious Sam was posted online, the community reaction meant publishers took notice.

The spirit of the first game’s gameplay is very much alive in Serious Sam 4. Don’t expect radical change, as the game is still an old school shooter at heart. Visuals have moved forward quite a bit in the time since, but Serious Sam 4 doesn’t lose the series’ sense of style. Expect colorful yet grotesque enemies, and expect them in extremely large quantities.

Davor Hunski also spoke about the unique challenges that come from developing in Croatia. In the past, team members have had to leave the project for years at a time to complete military service. When Serious Sam was being created by six or seven people, losing someone for a year put a massive strain on development. Thankfully now, things are a little easier as the Serious Sam 4 team sits at over 40 developers.

Serious Sam 4 was recently delayed from its initial August launch because the team needed a tad more time polishing the game. The “Against All Odds” video is the first in a five-part series scheduled to be published weekly, leading up to release on September 24, 2020 via PC and Stadia.