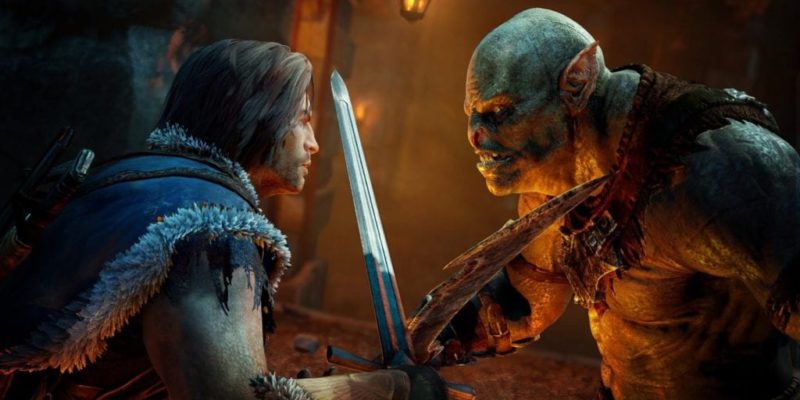 Let’s try not to lose our heads about this.

I’m going to do that horribly reductive thing games writers do when they have a news article to put together and summarise what I’ve just seen from Middle Earth Shadow of Mordor as follows: Assassin’s Creed in Middle Earth with Batman Arkham combat and a crazy-ambitious procedurally generated system of enemies. Phew, that was a long sentence.

The cornball plot summary didn’t sound great when the game was announced (ranger dude has family killed, bonds with a wraith, hijinx ensue,) but this footage is rather good. In it, we follow the aforementioned ranger Talion as he hunts down a boss chap named Orthog Troll Slayer. First though, he gets hold of Orthog’s minion, a goblin fellow named Rat-Bag.

Using his spooky Shadow of Mordor wraith powers (I think Tolkien lore is pretty much out the window at this point,) Talion convinces Rat-Bag to attempt to assassinate his boss. This enables Talion to follow Rat-Bag, and help out. Now, Orthog and Rat-Bag are said to be enemies “unique” to this particular play-through, and because Talion has encountered them before, they remember what happened (Orthog got his face burned, and isn’t too chuffed about it.)

The video goes further into the hierarchy of this, and it’s an impressive little snippet of the open world gameplay. What’ll matter in the long run is the design of that open world and how deep the mechanics shown in the video run. That’s impossible to say at present, but what’s on offer so far is rather promising.

Monolith’s Shadow of Mordor is currently due in 2014, but that may well change.