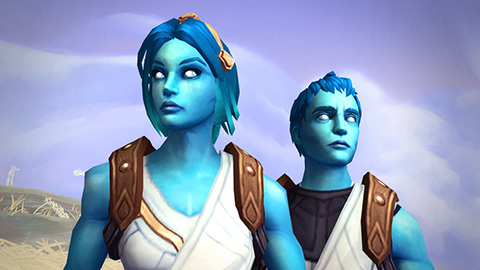 The Shadowlands beta is here, and with it, the ability to test new features, such as being able to change your gender at the Barber Shop. At the moment, changing your character’s gender is a paid service – you have to buy a $15 appearance change. However, in a recent interview, executive producer John Hight spoke on the matter, saying it didn’t send “the right message”.

The Barber Shop was first introduced during Wrath of the Lich King, though it was very limited back then. Players could use it to change their hairstyles, but that was about it. However, more and more options were added to the shop over the years. Nowadays, players can change nearly every aspect of their appearance, including eye and skin color. For the most part, this has made the paid appearance change all but obsolete – except for the case of gender. That too will finally change in Shadowlands though.

Barber Shops are about to get even busier with the addition of the Shadowlands gender change feature. One must admire the ability to give their characters a shave, haircut, new ears or a chin, different colored eyes and skin, and a whole new gender to boot. Blizzard has been making a noticeable effort to make the game feel more inclusive and accepting for players from all walks of life. These efforts have included everything from more diverse character creation options, to the introduction of World of Warcraft’s first trans character. John Hight is right, continuing to charge players to change their gender would have made a bit of a contradictory statement. Being able to change your gender in Shadowlands makes sense. However, all this player freedom does bring up a new question:

In Shadowlands you can change your skin color, eye color, and even your gender, but you can’t change your political affiliations? If you’re born a Blood Elf you’re for the horde no matter what. The lack of an option seems a bit ridiculous given that Valeera Sanguine is a Blood Elf that’s leaned Alliance since, like, forever. So, if NPC characters can decide to abandon their faction and support the cause of the other side, why can’t players choose? Come on Blizzard, it’s time to let us choose our own factions – or at least open the option to more races than just Pandaren.

Temtem guide – How to beat your rival Max in Uhuru, Kisiwa