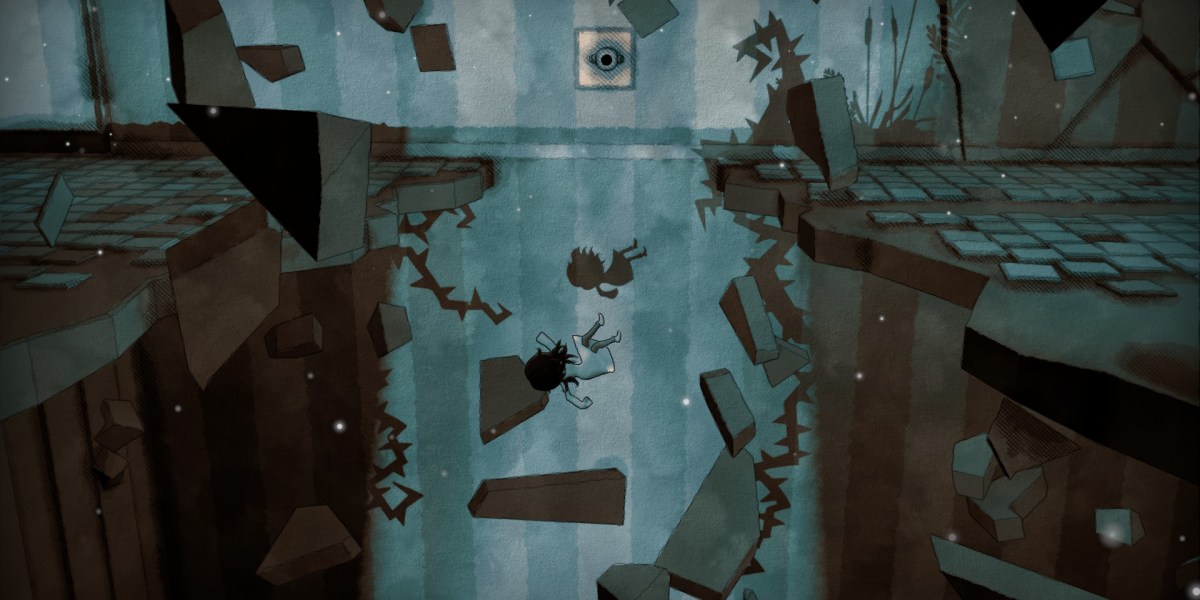 Shady Part of Me isn’t the first of this year’s narrative puzzle games to focus on shadow manipulation. But it might be the most unique one. Successfully melding 3D and 2D gameplay into a coherent whole is no easy feat, but developer Douze Dixièmes has done just that and wrapped it up with an intentionally vague, yet interesting examination of personal acceptance and growth. It isn’t the longest game around, but it’s as long as it needs to be and is highly memorable due to its mechanics and stellar presentation.

The game begins with a girl. She’s sad, she’s lonely, and she’s frightened. But she’s not totally alone. Her shadow walks with her, albeit separately. The girl and her shadow are voiced by Hannah Murray, best known for portraying Gilly in Game of Thrones. The girl has a suitably childish voice, while her shadow is more mature. I don’t want to delve too deeply into Shady Part of Me‘s narrative, as that would spoil the fun of piecing it together on your own. It’s one of those stories that doesn’t make an awful lot of sense for a large portion of the playtime. But it becomes fairly clear what you’re bearing witness to as you gain more information.

Shady Part of Me takes place over four acts. Each act is broken into several segments where your goal is simply to get both the girl and her shadow to stand within their respective circles at the end. The girl’s circle is always white and in the 3D space. Likewise, the shadow’s circle is in the 2d space and is black. Once they’re both in place, the next section, which is black and white and exists in sketch form, fills in, allowing you to progress further. It’s an effective way to structure each segment and gives the game a very neat feel. 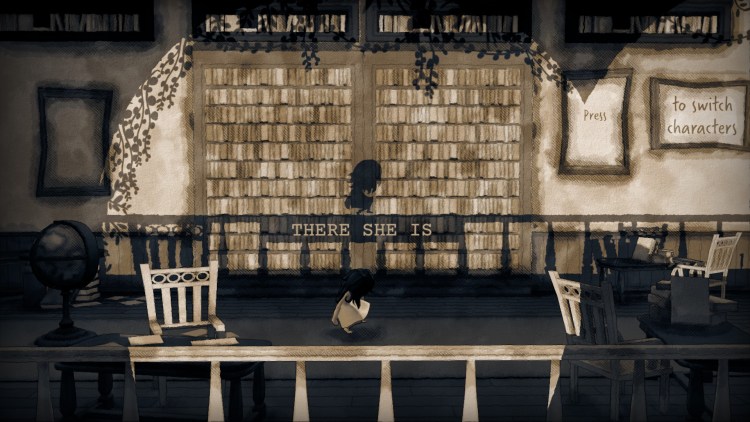 You’ll switch between the girl and her shadow with the press of a button in Shady Part of Me. The two offer completely separate styles of gameplay as well. Both can walk and pull levers, but the girl can push boxes while the shadow can jump. The girl moves freely within a 3D space and her main quirk is that she can’t stand to be in the light. Therefore, she can only move in the shadows, which requires you to manipulate the environment so that she can progress. Likewise, the shadow can only exist on lit surfaces but can only stand on other shadows. All of her environments are on the walls and floors and it’s rather striking to see both characters exist in tandem with one another.

The shadow plays more like a 2D platformer, and you’ll have to make jumps while navigating hazards such as thorns while avoiding getting crushed. The controls for both types of gameplay are great, as it’s easy to coordinate the two characters’ efforts. And Shady Part of Me is all about coordination as the two can’t complete their sections alone. Throughout the game, the shadow will need to help create shadows for the girl, while the girl will similarly need to light surfaces and manipulate shadows. These puzzles come in just a few varieties. There’s a lot of pushing boxes and creating shadows of levers and the like.

But there are a fair amount of unique situations that tie in with the themes of each location. Perhaps you’ll be prepping a boat or moving a large clock around. For the most part, Shady Part of Me‘s puzzles are strong and consistently interesting. They also tend to make a great deal of sense, which helps the game’s pace stay steady. Overall, the game has a fairly excellent difficulty curve, save for two sections that were much less clear than the rest. I had to request help for one. When I once again found myself stuck, I showed our EIC the puzzle and he noticed something I didn’t, which allowed me to move on. Your mileage will vary, of course. 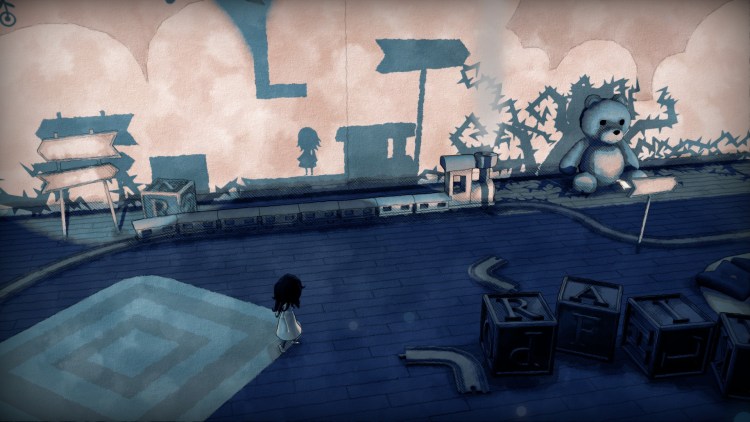 There’s a lot of variety to the environments in Shady Part of Me. You’ll see a mental health facility, a school, a carnival, and other places. Each location has a lot of character and a fair amount of interesting things to see that differentiate them from one another. The visuals themselves are somewhat cel-shaded and the game makes fantastic use of its muted color palette, often switching to different tones based on which character you’re controlling. As far as artistic-looking games go, this one stands on its own.

Audio in Shady Part of Me is similarly good. Hannah Murray does a very good job here, especially in regards to differentiating the girl and her shadow. It does sound like a bit of a stretch when she does the girl’s voice, however, even if her intonation and delivery are perfectly believable. The dialogue is similarly well-written. I could see someone playing through the game more than once to try and properly analyze the events that take place, as viewing the earlier sections while having a greater understanding of the narrative is an enticing prospect.

It will probably take most players five-to-six hours to finish the game, although that number can obviously increase if they were to get stuck, which is feasible. Shady Part of Me also has about 100 origami birds to collect, which can easily extend the game’s playtime. Collecting these adds tiny bits of additional text or voice acting and plugs a jigsaw piece into pictures corresponding with each act that can be seen on the main menu. You can also revisit any act you want if you’d like to hunt for these. I’m not sure if they grant anything additional, as I didn’t collect 100% of the birds during any one section. 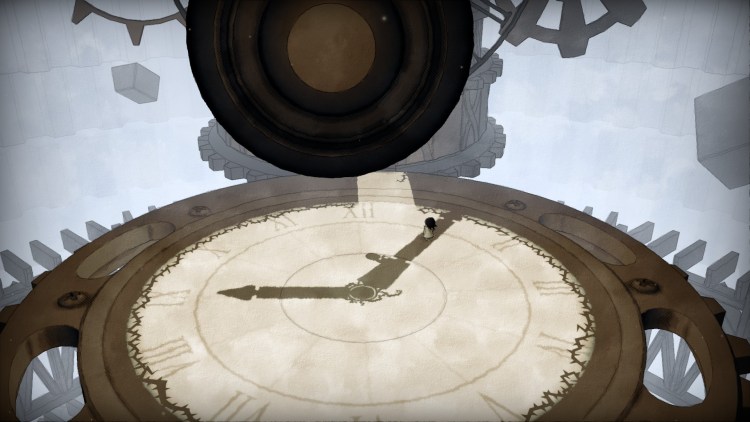 Shady Part of Me is a highly compelling little game, with enjoyable gameplay and satisfying mechanics that I’ve never seen pulled off quite like this. The presentation is strong, it lasts longer than most games of this sort do, and it also has a healthy dose of narrative themes to chew on. All of that makes it one of the best puzzle-platformers I’ve seen this year, making for an easy recommendation.

Shady Part of Me