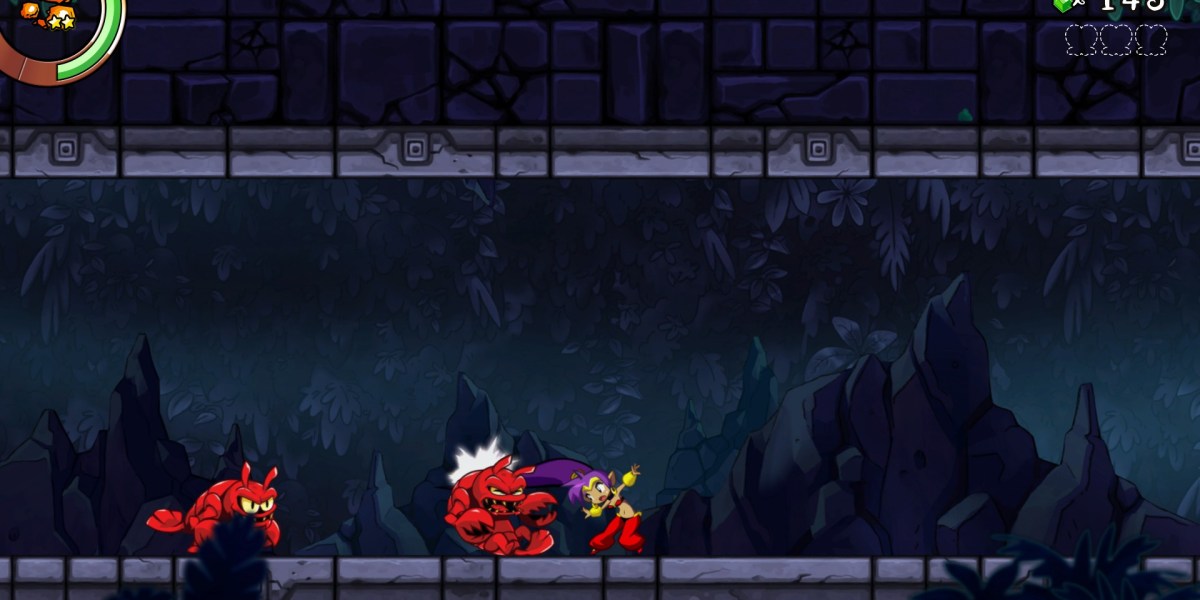 The Metroid-like subgenre isn’t particularly big on innovation. You’re dropped into interconnected maps and then unlock new abilities that allow you to reach new areas. Shantae and the Seven Sirens is an entirely typical game in the subgenre that will be very familiar to anyone who typically partakes. Despite this, the game’s gorgeous visuals, extremely responsive controls, strong level design, and witty writing make it a joy to play through.

Seven holy paths to hell and your trip begins

Shantae and the Seven Sirens begins with the titular hero, her uncle, and two of her friends arriving on an island so that she can take part in the Half-Genie Festival with five other young women. After they all hit the stage, however, the lights go out and the others all go missing. Naturally, it’s up to Shantae to track them all down and discover what secrets the island holds along the way, even if it means confronting the Seven Sirens all by her lonesome.

The story on its own isn’t going to surprise many people, but Shantae and the Seven Sirens is very entertaining all the same. The dialogue is often laugh-out-loud funny, with characters brimming with personality and a script rife with meta gags. At one point, Shantae’s uncle hands her a valve so that she can progress. She asks him what it is, as she’s never seen one before, and he explains that it’s an object used to solve water puzzles. Cute. 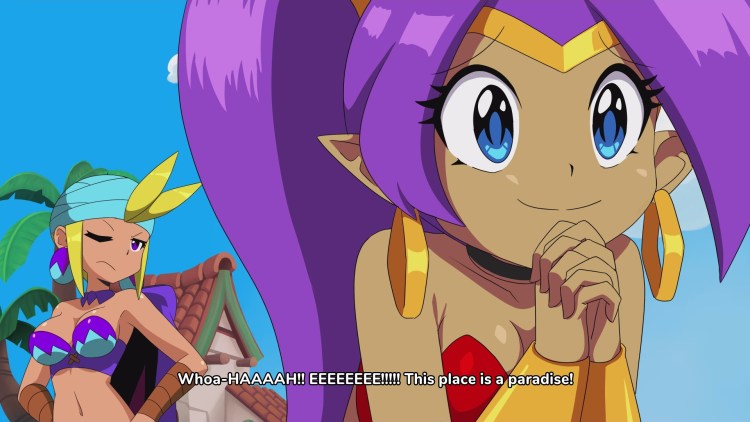 It certainly doesn’t hurt that the game has lovingly animated 2D character artwork. The sprites are colorful, varied, and quite the feast for the eyes. Similarly, the backgrounds are lush and detailed, with pronounced differences between each of the island’s regions. The previous game made use of 3D backgrounds, but this one uses 2D and it was a good choice. It is worth mentioning that some sprites from the last game are reused though. The game also has a fair amount of animated sequences. These are gorgeous and of exceptional quality, although you won’t see them very often. There’s also some voice acting, but only a tiny amount of the lines are voiced outside of animated cutscenes.

As I stated earlier, Shantae and the Seven Sirens is exactly what you’d expect if you’ve played a Metroid-like before. You explore the island and try to find and rescue each of the other girls while platforming and fighting enemies along the way. Shantae’s basic move set is very simple, yet still feels great to use. At first, she can just run, jump, and attack by whipping her hair. Defeating enemies nets her gems that she can use to purchase upgrades at shops in any of the game’s towns.

These upgrades are very easy to afford, even at the beginning. Before I’d made it even 20% of the way through, I’d maxed out Shantae’s attack speed and basic attack damage. Seeing her whip her hair at light speed often makes me worry that she’s going to get whiplash. The attack kind of works like an insanely fast version of Castlevania‘s whip. Alternatively, you can buy and subsequently upgrade sub-weapons, such as a fireball, boomerangs, or shields. These use up magic and aren’t strictly necessary, even if they’re fun to use. 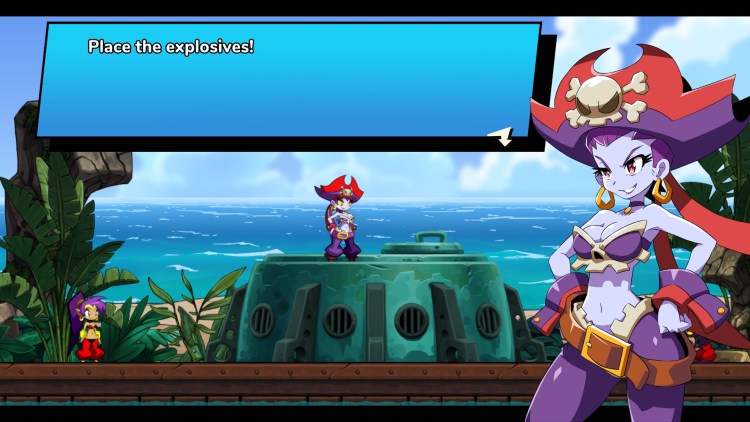 What is necessary is her suite of transformations and dance powers. As she rescues the other half-genies, she gets a new animal transformation that gives her new navigation abilities. The first of these allows her to do a quick dash by turning into a tiny green newt that sticks to walls. This is not only necessary to get around, but it also makes her significantly more mobile. But pressing buttons doesn’t completely transform her, as she only stays in the animal forms for specific things. For instance, the second she touches the ground as the newt, she turns back into her normal form. Her other transformations reference other games too, like Dig Dug and Donkey Kong Country.

Seven are your burning fires

After freeing the half-genies, you need to find them afterward and bring them a fusion stone to get a new magic dance. These dances tend to affect items in the environment, such as one that makes hidden objects and enemies visible, while another heals Shantae and can be used on the occasional injured NPC or wilted plants. Unlike, say, Metroid, the world in Shantae and the Seven Sirens isn’t loaded with hidden upgrades, however. There are little heart squids that you can find all over that will add an additional heart to her health bar for every four you locate, and there are gold nuggets that can be traded to NPCs.

Therefore, if you’re expecting to walk around and attack walls in the hopes that you’ll find a bunch of little upgrades, you won’t find that here. Enemies do drop cards upon defeat, though. Shantae can have three cards equipped at once, and they provide various effects. Unlocking the ability to equip them can take multiple of that specific card type, however. There are 50 cards in all to find, so you’ll have to choose carefully, although most of them simply enhance the sub-weapons. Others, however, make a pretty big difference. You can get one fairly early on that causes Shantae’s magic to refill itself over time, for instance. 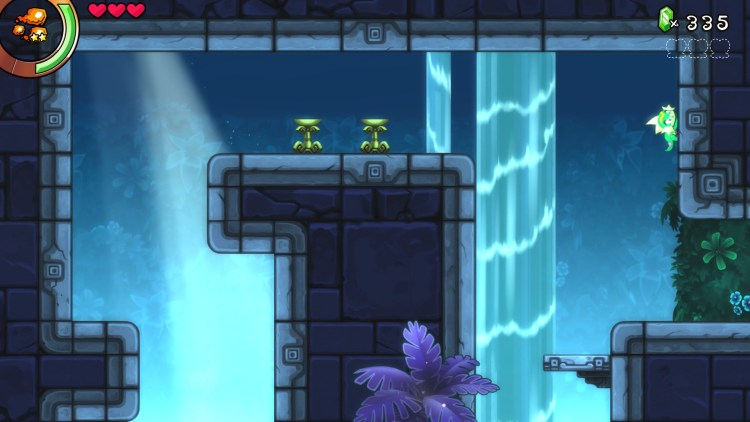 In essence, that means that Shantae and the Seven Sirens lets you heal for free pretty much whenever you want. On top of that, enemies regularly drop consumable items that also heal you, meaning that you can very easily make it through the whole game without dying once. Even without all the healing though, the game is pretty easy, and there’s even an item that can reduce damage. The new game plus mode makes things somewhat tougher, but anyone looking for a challenge won’t find one here.

Shantae and the Seven Sirens isn’t a particularly long game, although it is a pretty standard length for its subgenre. Plenty of players will beat it in as little as seven hours, with that number going up to a dozen or so depending on how much you explore and if you want to collect everything or not. Aside from the typical overworld navigation, there are a handful of small dungeons that have unique puzzles and bosses. The boss battles are fun, but the bosses die quickly if you have attack boosts active. Any boosts can be turned off in the menu though.

The game certainly won’t win over anyone who isn’t already fond of the subgenre, but I had a great time. It’s a fairly basic experience but a lot of fun to play, even if some of the fetch quest segments where you have to locate and deliver items to NPCs can drag the pacing down a bit. Still, genre fans will find a lot to like about Shantae and the Seven Sirens as long as they’re okay with the game’s low difficulty. 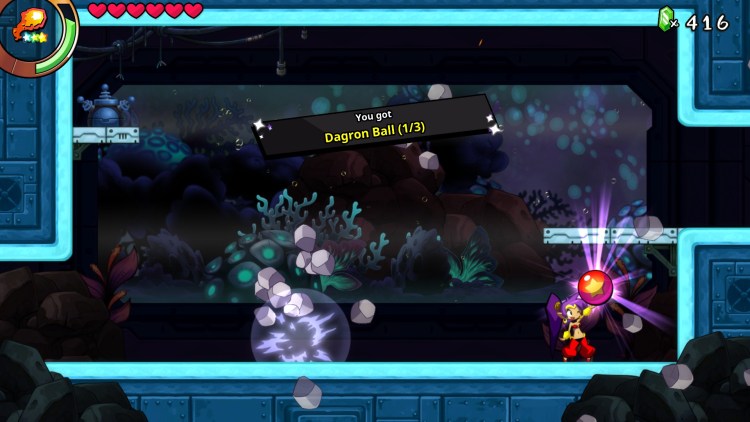 Shantae and the Seven Sirens

Shantae and the Seven Sirens is an entirely typical game in the Metroid-like genre that will be very familiar to anyone who plays them. Despite this, the game's gorgeous visuals, extremely responsive controls, strong level design, and witty writing make it a joy to play through.