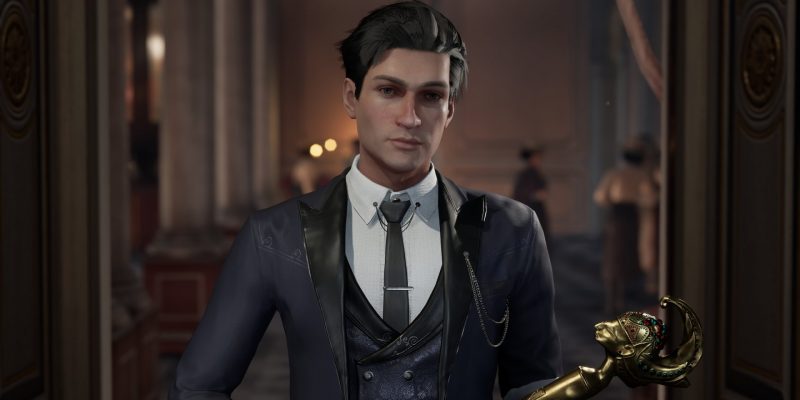 Sherlock Holmes: Chapter One is not like the other Sherlock Holmes games. This is possibly unsurprising. Frogwares has been making games based on the deerstalker-capped detective since the early 2000s, and the nature of those games has shifted dramatically over time. We’ve gone from traditional point-and-click think-athons, to first-person puzzling. And the last few have been in their own niche of chapter-based detective work. Now, with Sherlock Holmes: Chapter One, we’ve transitioned into an open world. If you’ve played The Sinking City, you’ll be right at home here; this is pretty much an evolution of that concept and set of mechanics.

Sherlock Holmes: Chapter One sees our much, much younger detective heading to the Mediterranean island of Cordona to visit his mother’s grave and seek closure. He’s more arrogant, more brash, and more naïve, and Cordona looks to have plenty for him to sink his deductive teeth into. Although, now I have a horrifying mental image of teeth with brains, so let’s quickly move on.

Sherlock Holmes: Chapter One: Subheading One

The preview build I played contained one main case and one side case, which was just enough for me to get a taste for how the game functions on a fairly basic level. If you’ve played The Sinking City then a good amount of it will be familiar. You explore the environs in the third person, use detective vision to recreate scenes, and piece together clues in your mind palace to come up with plausible explanations. There’s always more than one explanation, though; someone being at a bar for a short period may mean they had time to go back and commit a murder, or it may mean that a murderer had an opportunity to commit the crime while they were away. Sorting out what everything means is your job.

There is combat, but from what I can gather this will be greatly minimized from The Sinking City. I can’t comment on how it works (there was absolutely none in this preview build, which implies it’ll be a relative rarity), but I can at least say it appears to be entirely optional. I don’t mean “avoidable,” either. It looks like you can outright disable it in the options. Preview build, though, so that’s subject to change. Still, considering combat was one of the weakest points of Frogwares’ Lovecraftian adventure, this is a welcome change. 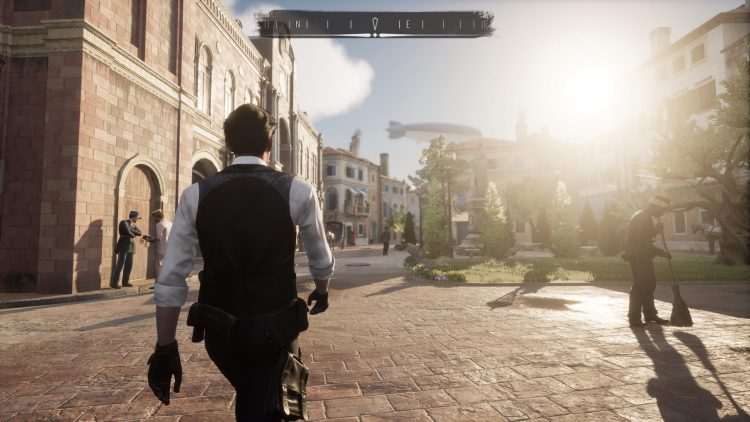 Cordona is an awful lot prettier than The Sinking City‘s Oakmont.

Other bits and bobs from The Sinking City are also present, like going through police archives, but one of the new additions is the disguise system. Cordona is littered with clothing shops, and Sherlock can purchase new clothes, hats, and bits of makeup or facial hair, which you can mix and match as you like. In the preview build, one case exclusively used this system to dress Sherlock up as a suspect.

Judging by the various meters on the side of the disguise menu, though, it looks like different people may respond to you differently based on your appearance. If you’re mingling with high society then a crisp look and a nice suit will go further than tattered clothing and some fake bruises. There are also some fun side elements tied to this. While you’re meant to be dressing up as a suspect, Jon will give you a little side objective to dress up as a man in a nearby portrait to see how the store owner will react.

The Adventure of the Creeping Man 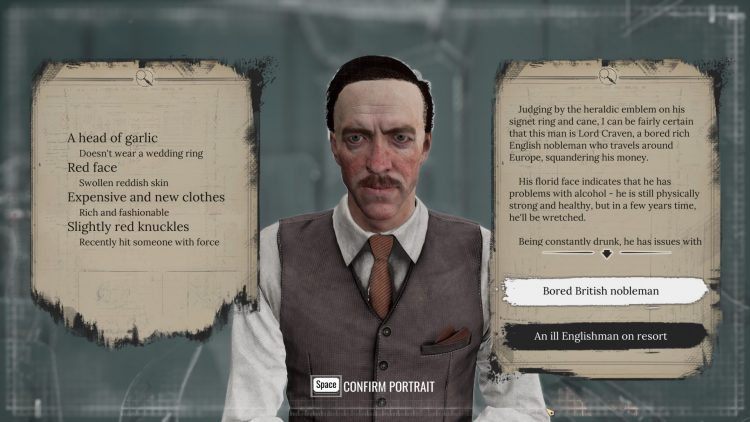 Once you have the clues, it’s up to you to determine what they mean.

The preview build starts with a 21-year-old Sherlock and his childhood friend Jon (no, not John Watson) arriving at their hotel in Cordona. After performing a few deductive feats to amuse Jon, Sherlock (or “Sherry” as he’s affectionately nicknamed) finds himself in the middle of a theft at a séance, which escalates into a murder. Being a bored genius, he agrees to help out — if only because it’s marginally more interesting than just sitting around doing nothing.

If you wanted to be a bit churlish, you could say that the investigation is mostly made up of little minigames, but all of them are engaging enough. From finding clues littered around the crime scene, to connecting those up in the mind palace to come up with hypotheses, it’s genuinely interesting to figure out the possibilities of how things could have unfolded. There’s even an ability to eavesdrop with its own unique mechanics — and Jon will start snarking at you if you muck up regularly, noting down your idiocy in his journal, though I have no idea if this has any ramifications. Hell, Sherlock Holmes: Chapter One even offered me the chance to skip through the eavesdropping and just ask the people involved directly, so user friendliness seems to be core here.

There’s more I can say about this, from the interesting suspects to the way such a short introductory case unfolds, but I don’t particularly want to spoil it. Also, I’d probably get yelled at. I will say that your own deductions and moral compass play into things. Though, you can finger the wrong person, and even if you figure out the real culprit, you can decide to let them go free. You can miss evidence, screw up the investigation, get the wrong man arrested, and the game is just fine with this. I kinda love it. Sherlock Holmes: Chapter One is happy to help you investigate, but the fruits of your investigation are on you, and it’s deliciously satisfying to get it right. It’s no wonder Sherlock’s so insufferably smug all the time. This isn’t new to Chapter One — the last few games have done similar — but it’s just as much fun here as before. 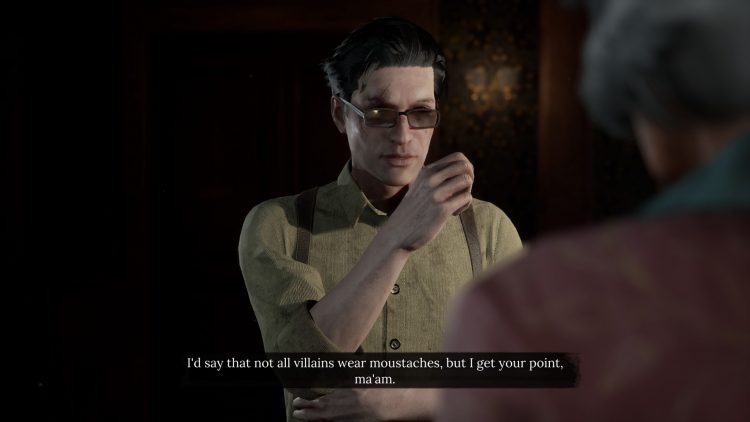 Playing dress-up sometimes has a point.

But ultimately, what I’ve tasted of Sherlock Holmes: Chapter One is little more than a drop on the tongue, and there are lots of areas it can still go horribly wrong. There’s plenty I like. Both the environments and the investigation elements have significantly improved over The Sinking City. Cordona is as beautiful as it is decadent, and the ultimate resolution of the game’s story is unlikely to be “it was cultists and/or Cthulhu all along,” which is pretty much a foregone conclusion in a Lovecraftian game.

But! I’ve barely tasted the open world, and I don’t know if it’ll feel like a living place or just a set of empty props. I have no idea how combat works. I don’t know how “open” things will be, or if I’ll be gated off regularly by the main quests. I’m not sure how the upgrade system works, or whether the moral choices (and incorrect deductions) matter much beyond personalizing my play experience. Then there’s the usual preview stuff. But expected bugs aside, I’m hoping that some UI elements will be a bit less unwieldy when the game launches. 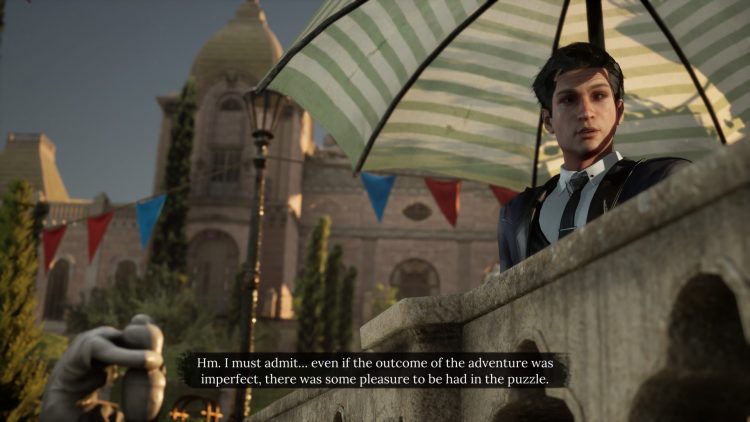 I’d probably be satisfied with this, but right now, I’m expecting more.

That said, if it sounds like I’m being harsh and complaining a lot, I’m really not trying to. I enjoyed the two hours I spent with Sherlock Holmes: Chapter One a lot more than I did The Sinking City, and that was a perfectly solid game. I’m just cautious of how much I don’t know.

If there’s one thing you should take away from this preview, it’s probably this. When the screen faded to black and I couldn’t proceed any further, I was actually disappointed. If I’ve enjoyed a preview build enough that I immediately want to play more — especially in these busy weeks right before E3 — that’s a pretty good sign.

Sherlock Holmes: Chapter One is due out later this year.