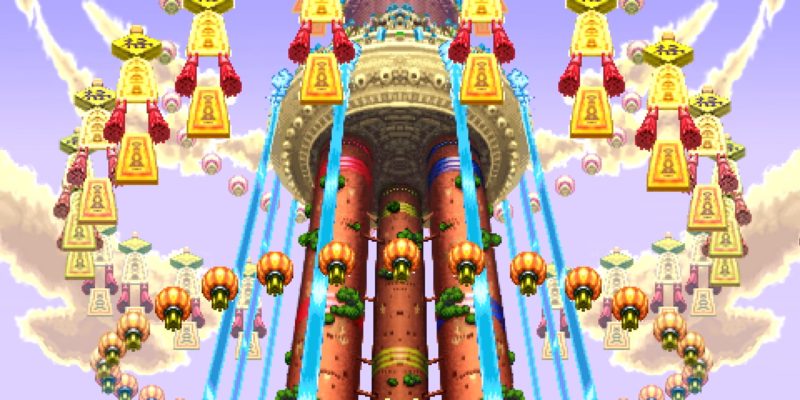 In the west, the Mystery Dungeon series is probably best known for its affiliation with Pokémon. However, Japanese developer Spike Chunsoft has been responsible for a number of games in the franchise released long before Nintendo got involved. The first of which was Shiren the Wanderer. First debuting in 1995, Shiren the Wanderer was a roguelike that set the foundations for later mystery dungeon titles. A decade and a half and four games later, Shiren the Wanderer: The Tower of Fortune and the Dice of Fate was released. Or as many franchise fans will know it by, Shiren 5.

And now another decade on and at last PC gets its first taste of Shiren. Just for clarity, this isn’t a remaster. Instead, Spike Chunsoft has ported across the roguelike classic to Steam and added a handful of typical PC options in the process. The recent trend of Japanese developers bringing across the classics we grew up with to PC is appreciated. And even though I would love to see more of this in the future, I can’t honestly say Shiren 5 was the game I was hoping for. Because while it has potential, The Tower of Fortune and Dice of Fate will likely be a divisive game.

The story follows Shiren, a Japanese warrior traveling alongside his talking ferret companion, Koppa. While journeying through Inori Village, they overhear of a critically ill young woman, Oyu. Her best friend Jirokichi plans to head over to the Tower of Fortune to save her. Within these towers contains the three dice of fate. Collecting all three and climbing the true Tower of Fortune supposedly grants the power to change fate itself.

Shiren and Koppa choose to help Oyu out, and so begins your adventure. The story is short but sweet. You can expect an experienced playthrough to take around five to six hours. Newcomers will likely take a few hours longer. The bulk of content can be found in the vast post-game. While the main story dungeons have some RPG mechanics mixed in, most of the post-game content is purely rogue focused. That means that you can’t take your own equipment in and instead have to rely on your knowledge and skill alone. 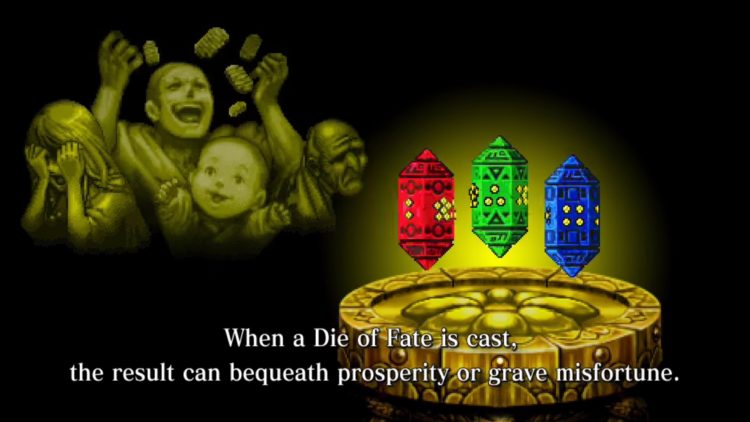 Mystery Dungeon games are all about one thing: entering an unknown dungeon that changes every time you leave, and trying to make your way to the top. Each floor consists of a range of rooms and hallways that you’ll need to navigate in order to find the stairs. And every set of stairs will take you up to the next floor, naturally. A dungeon can have anywhere between a handful of floors to just under 100.

The catch is that the floors are filled with dangerous enemies. On your journey, you’ll need to upgrade your shield and weapon while using consumable items to safely make your way through each dungeon. The effects of these items vary from confusing enemies to damaging everyone around you. Some items may need to be identified before becoming useful. This isn’t a JRPG where you should stock up on useful loot for later on; Shiren 5 expects you to burn through your inventory. It’s necessary to survive. 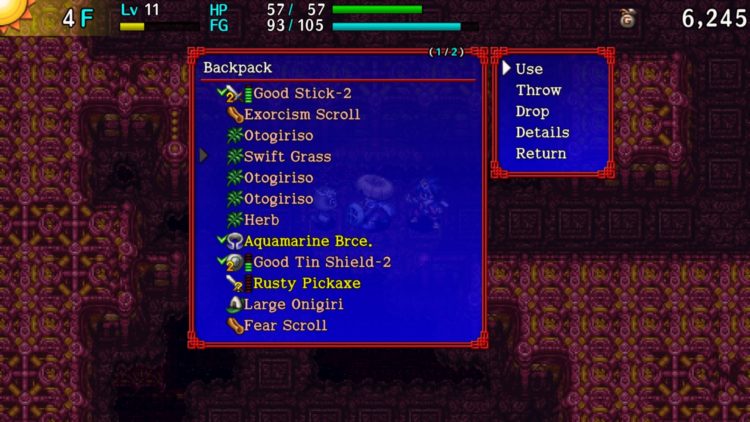 Don’t be afraid to burn through items. Shiren is a hard game and using everything you can to benefit your playthrough is essential.

There are more aspects to learn in Shiren the Wanderer than I could ever wish to explain. Basically, Spike Chunsoft combined every major gameplay feature from the previous four titles. The result is an extremely sophisticated roguelike that can take hundreds of hours to master. For newcomers, there are a bunch of useful tutorials that cover the majority of things you’d want to know. These are individually well done, but there are just too many of them. Completing all of them from start to end can take well over an hour.

Speaking of aspects, Shiren 5 doesn’t use a traditional leveling system. Levels come quick and you’ll find yourself well into the twenties and thirties far faster than expected. This can give the initial impression that Shiren the Wanderer is a forgiving game that throws levels at you for fun. But any slight suggestion of which is eventually crushed and obliterated the first time you die.

Shiren does not play around

As with many other roguelikes, Shiren 5 heavily punishes death. Not only do you lose all of your equipment and items, but also every last drop of experience is wiped. You start over again at level one with nothing to your name. You even have to re-gather your party members who will also have had all of their stats wiped. The only thing that stays intact is the overall story progression.

This alone is brutal enough, but what’s crazier is that you’re even punished for success. Finishing a dungeon will set you back to level one. Unlike with death, you do keep your items, but your health pool is shrunk back down to a beginner’s level. If you’re careless after a level reset you could get one-shot in the next dungeon and have to start over again. 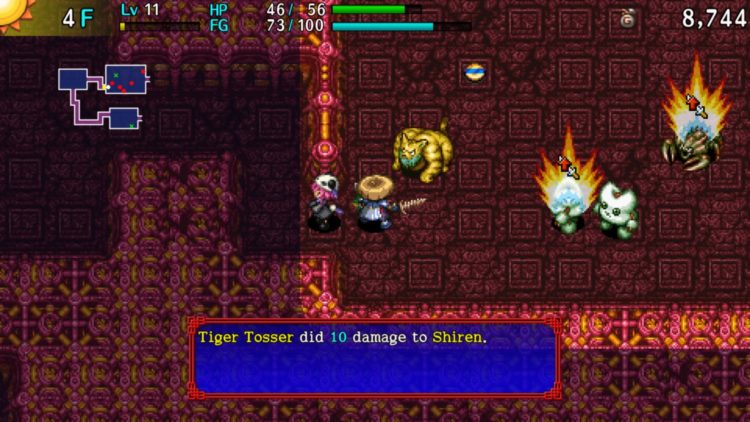 This is no doubt the supposed selling point of the Shiren series. It’s brutally unforgiving, aiming to screw over anyone who fails to plan and prepare properly. And that’s where the divisiveness comes into play. For some players, this is going to sound like heaven — a truly tactical roguelike that requires a deep understanding of the game. But I don’t fall into that category. Honestly, I hate it.

Dying in Shiren 5 is one of the most frustrating experiences you’ll find in any video game. Due to the random nature of the genre, death isn’t always rational. Sometimes you will die to something that was just unfortunate. That’s not to say it was unescapable, but that avoiding it would have required some sensational foresight. Foresight that a newer player just isn’t ever going to have. And when you die, it sinks in. You’ll realize that the last three hours of gameplay were a waste of time. You’re going to have to start over, re-farm equipment, and grind out levels to give that dungeon another go. And after all of that, you could easily just walk back in to meet the same fate — even with a decent degree of preparation beforehand.

But that’s not even the worst part. My most frustrating death by far came about eight hours in when my game crashed mid-dungeon. I didn’t think much of it at first since Shiren 5 has an auto-saving feature. Maybe I’d lose a few floors of progress but I can live with that. Except that when I booted Shiren the Wanderer back up I wasn’t just a few floors back. I wasn’t even at the start of the dungeon. I was standing in my spawn area at level one once again. If your game unexpectedly closes, Shiren assumes you died mid-dungeon and resets you. I had lost hours of progress because of a game crash. 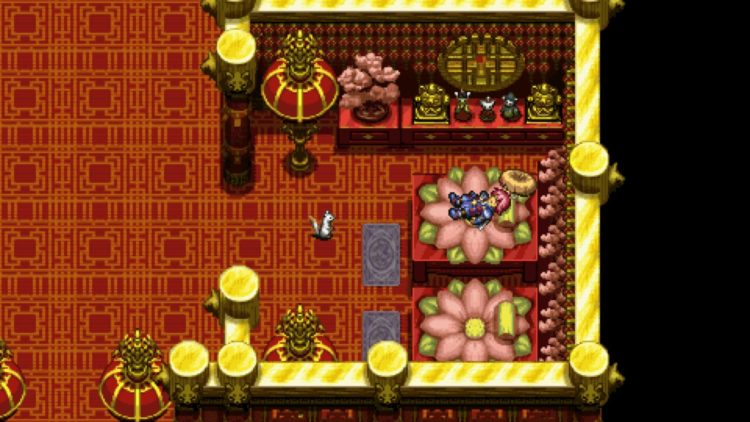 A screen you never want to see.

To be fair, there are a few methods of mitigating the damage. The most common is holding either Revival Grass or Undo Grass. Revival Grass brings you back to life and Undo Grass resurrects you and gives you the opportunity to leave the dungeon with your items. Alternatively, you can pay to tag your equipment. Any tagged equipment has a good chance of being saved upon death. I appreciate that there are workarounds to avoid losing everything, but they aren’t easily accessible early and even mid-game. Sure, when you’re set up in end-game these work, well but getting to that point isn’t fun. At least not for me.

That one crash aside, Shiren the Wanderer is a very well made port. It has native 1440p and 4K resolution support along with some well implemented keyboard controls. None of the controls are re-bindable, but the presets provided are comfortable to use. The only noticeable issue I had was that in full-screen at 144Hz there was some nasty screen tearing. Switching over to borderless windowed seems to fix that problem easily enough. 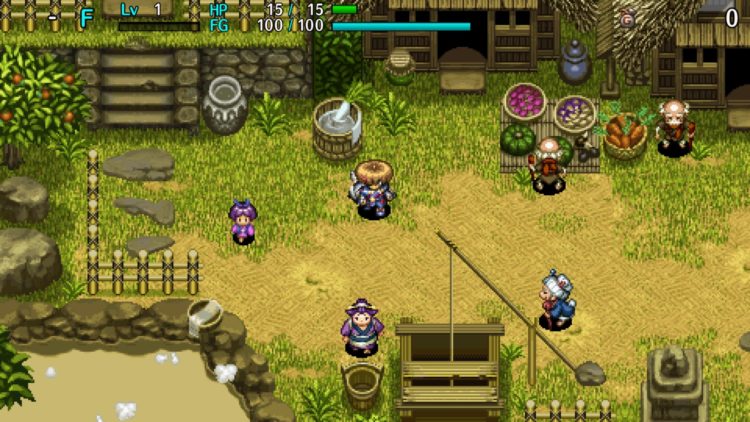 The SNES-inspired visuals are gorgeous and scale at higher resolutions beautifully. With retro graphics, sometimes stretching the image out can result in a loss of visual fidelity. But that’s not the case with Shiren 5. I even tried this out on my 4K 55″ TV and it still looked as sharp as ever. Given that The Tower of Fortune and the Dice of Fate started life as a PS Vita game it’s impressive how well it holds up for a modern PC release. Especially given its perfectly reasonable $19.99 price tag.

This review was difficult for me because I can tell Shiren 5 is a good game. It has a lot of well thought out mechanics and fun interactions. There’s even a decent enough narrative in there even if it isn’t a big focus. But I’m just not built in a way that lets me enjoy either the brutal death mechanic. Perhaps my biggest gripe is that even when you do power through and get setup properly, it just isn’t satisfying. At best, I felt relief. And doing all of that work for mere relief isn’t worth it in my eyes.

But that doesn’t mean you’ll necessarily dislike Shiren as well. I want to emphasize that there’s a lot of really cool aspects to uncover if you’re willing to put up with the frustration. Personally, I wouldn’t advise this to casual Mystery Dungeon fans. If you’ve played the Pokémon and Chocobo games and wanted to try something similar, Shiren might prove too great a challenge.

Shiren the Wanderer: The Tower of Fortune and the Dice of Fate

Shiren the Wanderer: The Tower of Fortune and the Dice of Fate is an interesting game. It does a lot of things right and is the prototypical mystery dungeon title. And if that's all you want, then look no further. But I suspect most people are going to find the dungeons frustrating and the permanent death mechanic infuriating. This is an acquired taste that you'll either love or hate. Unfortunately, my personal feelings fall closer to the latter.

By Joshua Chu9 hours ago
Reviews