The Eternal Kingdom was really pissing me off. We’d been at loggerheads since we first met; my exploratory fleet was off making friends with planets past their territory, when suddenly, one of the neutral planets behind us pledged themselves to the Eternal Kingdom. My fleet was stuck behind the territory of another faction, with absolutely no way to get back. 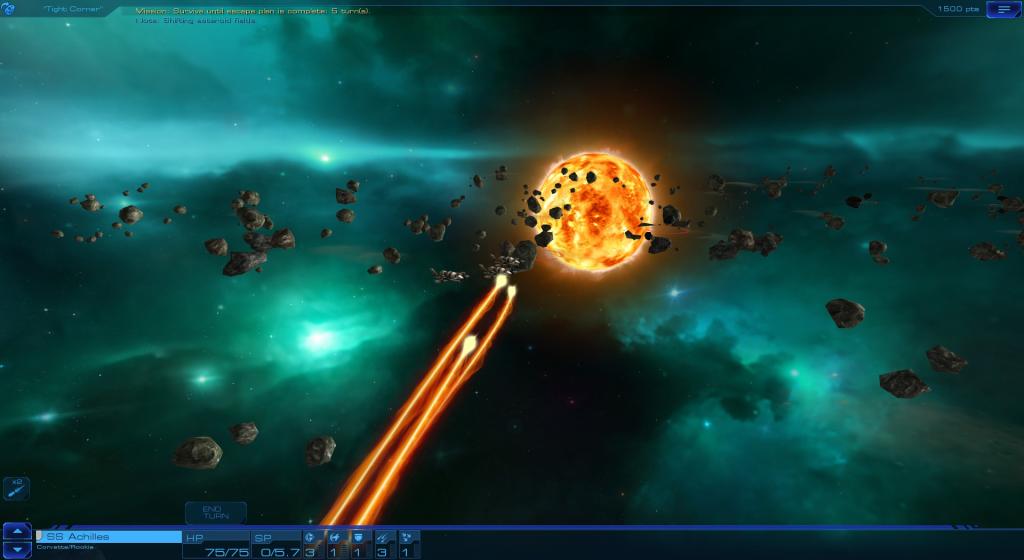 So, obviously, I had to declare war just so that I could attack one of their planets, and use that as a staging point to get back to my own homeworld. Unsurprisingly, they weren’t best pleased about this, and our mutual “I’ll do my thing, and you do your thing” became a rapidly escalating war.

We’d come to blows pretty much every turn, trading planets back and forth, and occasionally making “Leave that planet alone and I’ll give you this tech” deals. Eventually, my superior production capabilities led to me getting ships sufficiently big and nasty that I started an advance towards their homeworld.

Then the Second Alliance – over on the other side of the galaxy – built seven Wonders and won the game. Fuck. 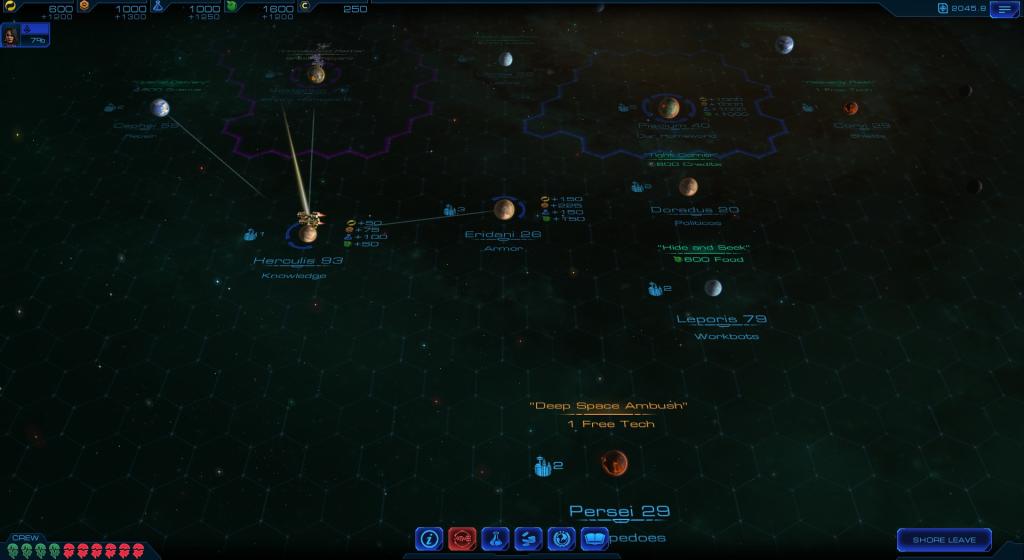 Mighty empires from little acorns grow. Or… something like that.

Sid Meier’s Starships is an incredibly light game, offering to give you a tactical and strategic experience in a fraction of the time a game of Civilization or Total War would last. Over the course of 30-60 minutes, you expand your burgeoning empire throughout the stars, build ships, level up tech trees, engage in tactical battles, play the diplomatic game with your rivals, and then win. Or lose, when some git on the other side of the known universe hits a victory condition.

And, well… if nothing else, it certainly succeeds at condensing all of these elements down into something quick and simple.

You have exactly one unit. Moving it onto a neutral planet triggers a mission – an event that chucks you into a tactical battle. It might be to fend off Marauders, or to use only your flagship to escape to a warp point, or to capture and hold a number of outposts. Completion nets you “Influence” and a reward tied to the difficulty of the mission. Get four influence points on a planet, and it becomes a permanent part of your empire. 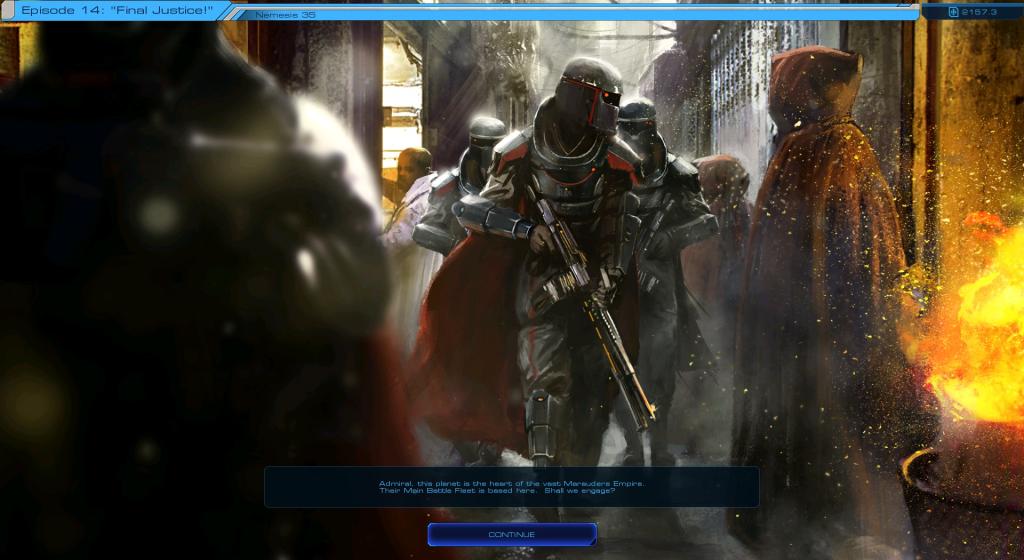 Moving it onto an enemy planet triggers a different mission, depending on whether or not their fleet is in range. But you can’t just whizz around forever; your crew need to rest, and travelling in space or taking part in battles Fatigue them, making them considerably worse in combat. So you visit two or three planets, and then the computer has a go.

Planets generate resources each turn – Energy, Metals, Science, and Food – and each of these can be boosted by building cities (using Food) or building improvements (using Metals). Energy is used to repair, upgrade, and purchase new ships for your one-unit fleet. Science is used to purchase technology. And, finally, you can also trade resources for Credits in the marketplace, which can then be used to purchase any other resources you might need. 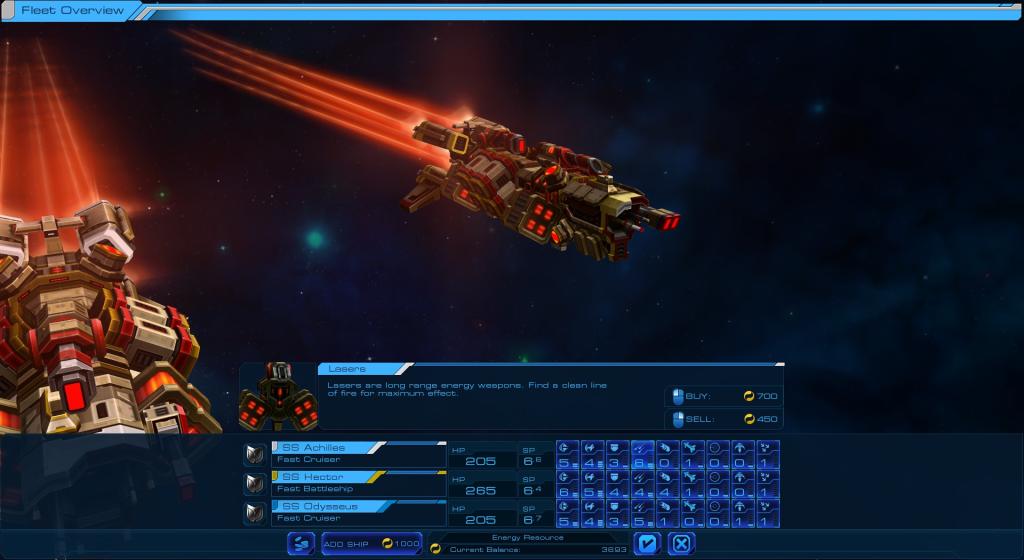 Ships are bought, upgraded, and repaired with the same resource, so Energy has to be managed far more carefully than pretty much everything else. Waste too much on upgrading your ships, and your turn might be cut short when you don’t have enough to repair them after a scrap.

Keeping with the “simple” theme, there are no tech trees or massive trade-offs in ship design here. You basically have every technology at the start of the game, but you can upgrade each one by spending your Science. Upgrading lasers makes your lasers do more damage. Upgrading armour gives your ships more hit points. Etc. The only trade-off is that ships bristling with armour and weapons move more slowly, but all that means is you need to spend some Energy on engines every once in awhile.

And that is basically the entire strategic game. Swoop around the galaxy like a demented metal condor bristling with weapons. Upgrade cities and build improvements to get yourself more resources. Use those resources to research new techs and upgrade your ships. Use those ships in fights. End turn. Repeat until someone hits a victory condition, whether it’s to wipe out the competition or build Wonders or control a sizeable part of the galactic population. 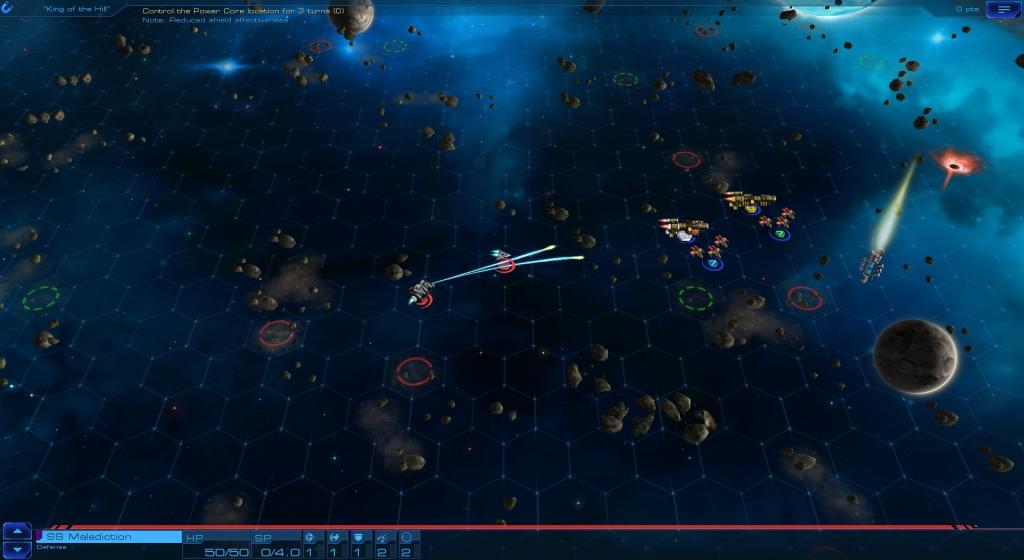 The actual textures and models aren’t amazing, but I do love the game’s general aesthetic.

Battles also follow the theme of keeping everything simple. You and the computer take it in turns to move your ships, and in addition to their movement, each ship gets one action per turn. They can launch fighters, or fire a torpedo, or engage with weapons. Asteroids and planets provide cover, lessening or completely removing the damage done by incoming attacks, but you have to be careful about enemies flanking you as attacks do more damage from the rear.

You’ve got a few tactical options depending on how you’ve upgraded your fleet – if you have a light cruiser armed to the teeth with long-range weapons then you’ll want to keep it back, and you might have to decide between launching an attack or sending out a wave of lethal-but-flimsy fighters – but it’s nothing particularly taxing. There are a few quirks and curveballs, like stealth ships or the arrival of reinforcements, but you can get to grips with how it all works within one or two engagements. 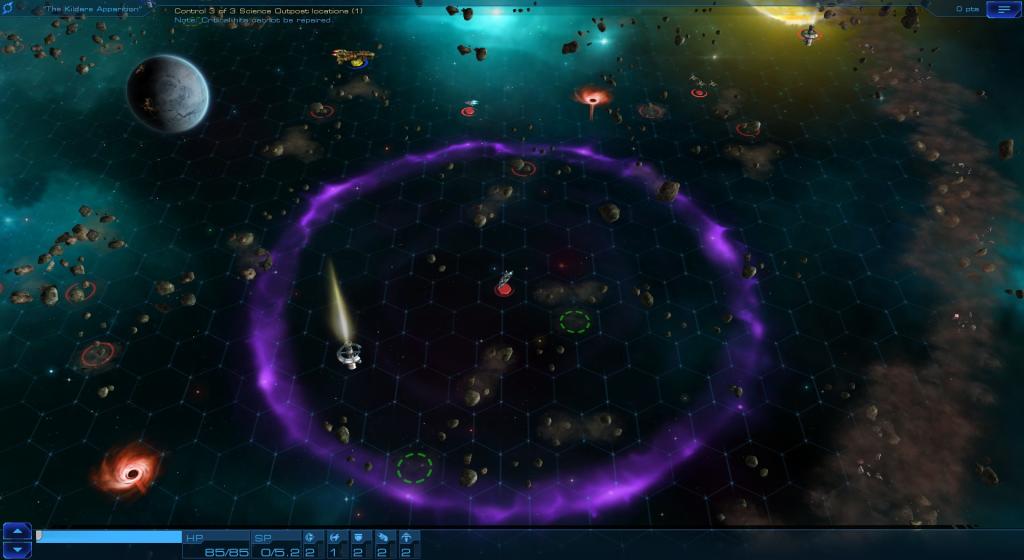 Stealth ships are invisible until you get into range, but this really isn’t a big problem: you can still see their moves, so you just have to remember where they ended their turn.

Sid Meier’s Starships, then, isn’t the next great tactical strategy game, but it’s not trying to be. It’s a light game for a coffee break, or for a bored half-hour before you leave to catch the bus. That’s what it’s trying to be, and I can’t really fault it for that.

I can fault it on two other fronts, though. First is the general UI design, which works, but doesn’t exactly look fantastic; there’s far too much in the way of empty, unused space, and a lot of the UI elements are goddamn miniscule on a high-resolution screen. I put this down to the fact that it’s a game simultaneously designed for tablets. 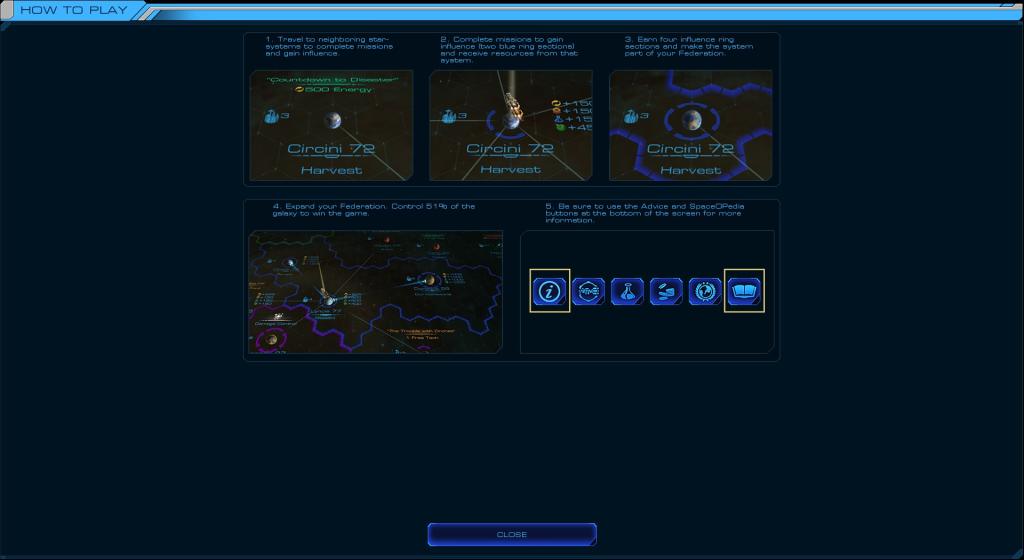 Amusingly, I think this screenshot manages to show off both of those problems in one go.

The other, rather bigger problem, is one of depth. Sid Meier’s Starships is not, in any way, a deep game. The diplomatic screen, for instance, almost entirely boils down to getting a report on what the rival faction has been up to and what they control, and maybe offering them a peace treaty; there’s no forming of alliances or diplomatic manipulation here. In fact, barring a few key decisions – like whether or not to invade a rival – the entire strategic side of the game feels like a prelude to the tactical combat. Which is quite good, but also doesn’t offer much that’s new or different after an hour. Otherwise, you’re just clicking to make numbers bigger, which you can then pour into your ships or your hilariously powerful Wonder constructions.

The game also very quickly reaches a point where every single planet is part of one empire or another. When this happens you stop getting the fun little missions and stop battling over Influence, and instead just start slugging it out with your neighbours. This is also a bit of a shame, mostly because the Influence is actually one of the game’s most unique mechanics, but also because those early missions to add a suitably Star Trek feel to the proceedings. I mean, they’re called “Episodes”, and tend to have names like “The Brinks Job” and “Surprise Package.” This dumps a lot of the flavour out of the game, and just leads to you attacking one identikit rival empire after the next. And then you win. Or lose. 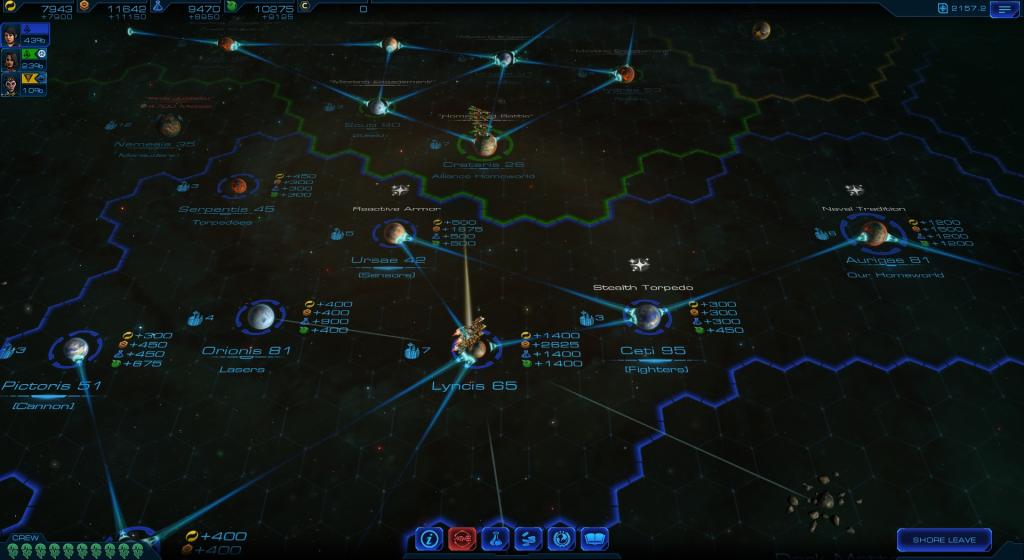 Don’t be fooled by the numbers or the hexes; this is a remarkably simple game, even in an end-game state like this.

Unfortunately, this lack of depth also means that – after five hours or so – I pretty much feel done with Sid Meier’s Starships. I’m sure I’ll pop back in for a quick game every now and then, but barring beating the game on the highest difficulty (and for the record, “Hard” feels about right to me, and I’m generally bloody terrible at Sid Meier’s games) I feel like I’ve seen it all and done it all. In fact, I felt that after about three hours, which is a bit worrying for something priced at £10.99. It doesn’t have the character, random events, or inherent silliness of something like Weird Worlds.

Sid Meier’s Starships is a relatively solid and well-assembled game, and if you frequently have little breaks where a game like this would fit in, it might fit the bill. Likewise, I’d imagine that it’s perfect for tablets. But if you’re after something that’ll keep you occupied for longer than a bored 30 minutes, you’ll have to look elsewhere.