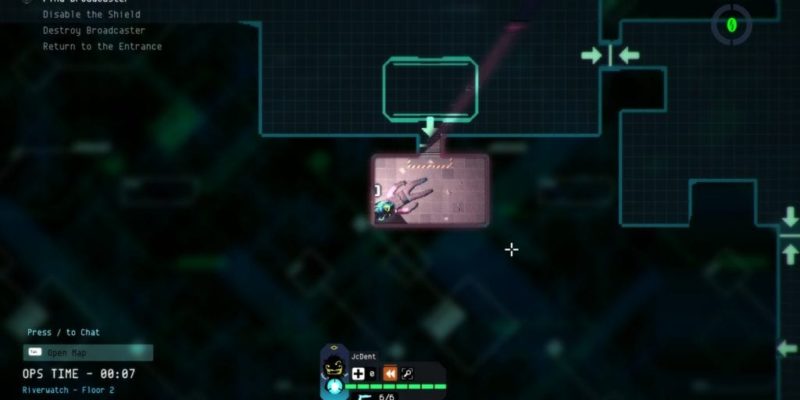 Do you want to be a sneaky dude out to save the world? Well, you’re in luck, since games like that are plentiful these days. It also means that people developing new titles have a lot of stuff to draw inspiration from. Signal Decay claims to have Monaco and XCOM in its DNA. But does it?

The premise of the game is threadbare enough to count as an excuse plot. The world has been taken over by mind control radio signals! Only a few people avoided the fate – and you’re one of them. Together with your team (or totally alone), you’ll travel the globe to thwart this nefarious plot. Unfortunately, the game doesn’t feature Udo Kier playing a Soviet psychic.

My thesis on Signal Decay

Signal Decay (previously known as Squad of Saviors) started out as a thesis project — and it shows. It’s a relatively simple 2D, top-down perspective game. You move your agent with WASD and aim with the mouse. Controller support is also available. You can use a variety of guns to violently take down opponents as well as utilize gadgets to make things go smoother. (Some gadgets are passive and don’t need activating.) In the end, your goal usually is to reach the broadcaster (the machine that is spreading brain control waves), destroy it, and exfiltrate. If you manage to loot some stuff along the way, that’s even better. 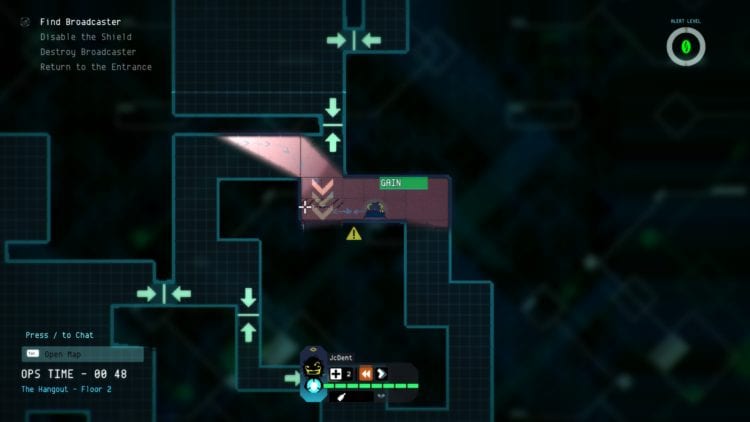 “Gain” is short for “call elevator.”

Outside of the missions, you will chill in your invisible airship. This is where that XCOM DNA comes in. (Thankfully, I haven’t played Monaco.) You can choose to review available mission sites, which differ in size and security measures, and decide where you’ll go next. Then you can do research – this upgrades your agent, allowing you to equip and carry around more gear. Each weapon/gadget not only takes up an appropriate slot but also has power consumption. And if you want to manufacture gear, you literally walk around the tech tree of unlocked guns and geegaws to find the one you want. Once the timers are running, you retire to your sleep tank to speed up time.

There’s not much to choosing your agent in Signal Decay – the classes are only different in what starting gear they get and how much ore (the only resource in-game) they begin with. The biggest difference comes from choosing to go solo or play with other people. Solo players get a time-rewind gadget. When you use it, you leave an image of yourself where you stood while the real agent retraces a recorded bit of your path.

Its essential use in Signal Decay is to use yourself as a distraction for your foes: While they’re busy shooting at your decoy, you yourself can zip back to a previous position. This will allow you to outflank them (Shots from the back are immediately fatal in most cases.) or just sneak away through a previously guarded door. It’s also the only way to fulfill some interactions that are definitely meant for a 2+-agent team. The simplest example is the trip-wire secured door. Cross the wire and the door locks. There’s a button to unlock it, but again, there’s a tripwire in your way. What you do in Signal Decay is cross the tripwire to stand in front of the door, then walk to the button, press it, and time-rewind yourself to the door. Now you can loot the unlocked room’s contents with impunity. 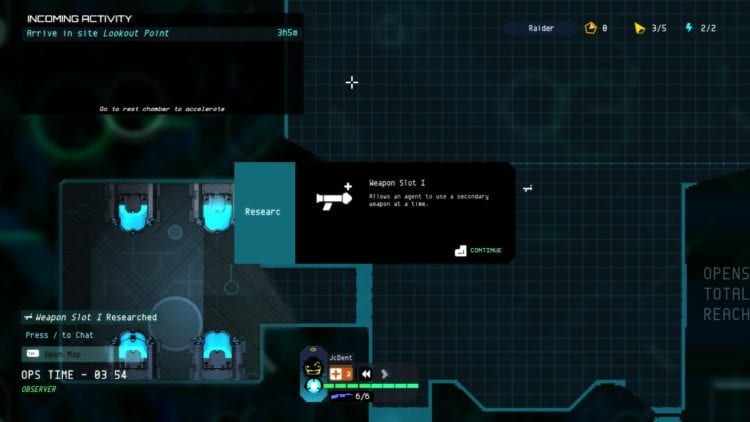 Oh, hey, now I can carry two underwhelming guns at the same time!

Incidentally, this would imply that the agent is immaterial when rewinding time. This is painfully not the case when your rewind path intersects with some enemy troopers. For them, you are very much physical.

An opaque helmet back in time

Speaking of which: the opponents. The guard is your run of the mill grunt, either patrolling an area, shuffling in one spot, or just staring at a wall in a closed room. I guess the brain control waves in Signal Decay aren’t that great for guard skills. The guards come in a variety of flavors. Some of them are simple guys armed with stun pistols. Others carry around laser rifles, nearly impenetrable ballistic fields, heavy shielding, and so on. They have vision cones of variable intensity, they can hear your footsteps and shots, and they are generally a pain in the ass. You want to sneak up to them from the back, assassinate them, steal any ore they have, and dump their body in a potted plant. When you raise alarm levels, the guards are the ones who come in as reinforcements. 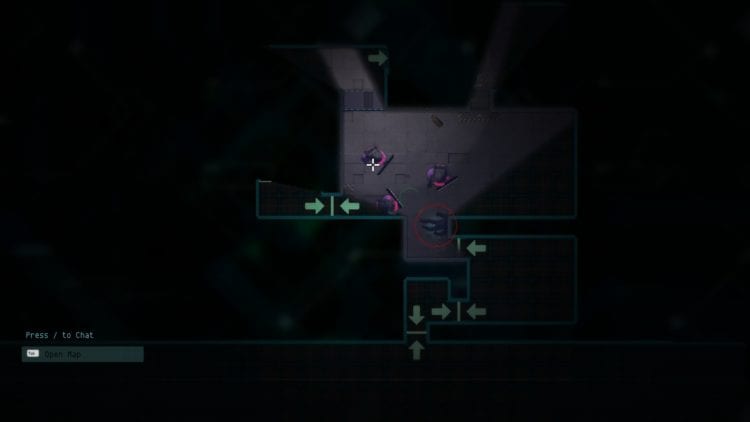 “Kick him again, just in case.”

However, blowing up the broadcaster will knock the guards out, but not immediately. That’s why robots exist in Signal Decay. Some are simple, like stun-Rhoombas who patrol an area, have a circular detection area, don’t raise alarms, and don’t really deviate from their path. Others are beefier, faster, or unpleasant in some other way. They’re most often released after you destroy the broadcaster. After all, the goons are down, and you can’t let the agents have the run of the place. Turrets may also make an appearance.

So how do you get around this nasty stuff? Most of the time, you’re trying to sneak past the guards. Thankfully, Signal Decay‘s insistence on doors being serious business somewhat helps. When you reach a closed door, you get the immediate vision of the room beyond (which disappears once you move away or open them). The doors don’t let the sound of your footsteps through either. This way, you can plan your assault before opening the door. (It takes a surprising amount of time.) Guards two closed doors away won’t react to fire, meaning that scouting the area before bopping some goon is a generally good idea.

You can also engage a stealth field, which makes your footsteps inaudible and lets you use cover and freely move through the faded area of the vision cone. And while you can use guns from cover, (The enemy can’t and their fire will always hit cover, which is destructible.) you can’t actually throw bottles over it, which makes it that much harder to distract the guards (and shoot them in the back of the head). 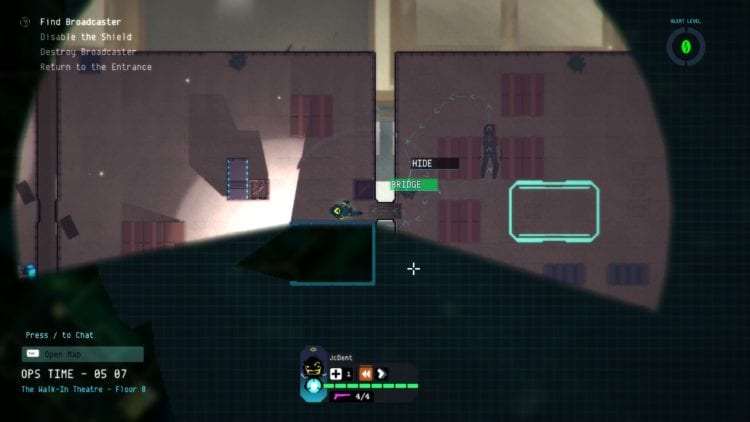 At least some of the maps are nice…

However, Signal Decay is quite shallow beyond that. There’s not much depth to the gear unlocks and upgrades, and the minimalist writing, as well as graphics, don’t bring much joy when it comes to inventory items. There’s really no excitement in unlocking new blueprints, as what they unlock is either not that cool or not really immediately useful. And if you’re playing alone, you’re missing out on the social aspect of setting up ambushes, coordinated firewall hacks (Read: one person activates a console; another rushes a room protected by a different kind of tripwire.), and so on.

Overall, Signal Decay is not something I could recommend yet. Maybe it works better if you have buddies to have your back. Maybe it will grow some more meat on its bones as the Early Access progresses. But currently, there’s not much to entice you to jump in.

By Tim McDonald4 days ago
Interviews