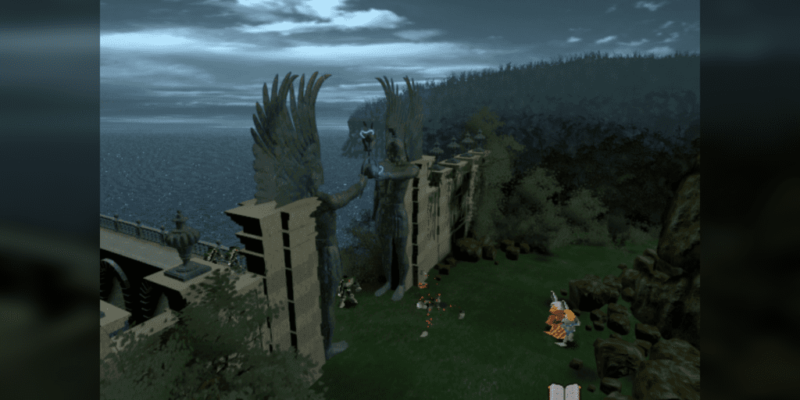 Earlier this week, THQ Nordic released a new version of the 1999 Infogrames (later part of Atari) title Silver on Steam. It’s game I, and seemingly quite a few others, have pretty fond memories of, so it seemed worth taking a look at how this version runs on a modern system. Figuring out the full extent to which this release differs from the existing GOG edition isn’t straightforward, but it certainly has a couple of notable additions.

Listing out my system specs is probably less crucial than usual given the age of the game, but for the sake of completeness here’s what I’ve been playing Silver on: i5-6600 / 16GB RAM / 4GB 380X / Windows 10.

At the time of writing, Silver is on version 1.21. That’s important to note, because it seems to be receiving fairly regular patches and the latest added one new option while removing another. Let’s take a look at the options menus to show you what I mean. 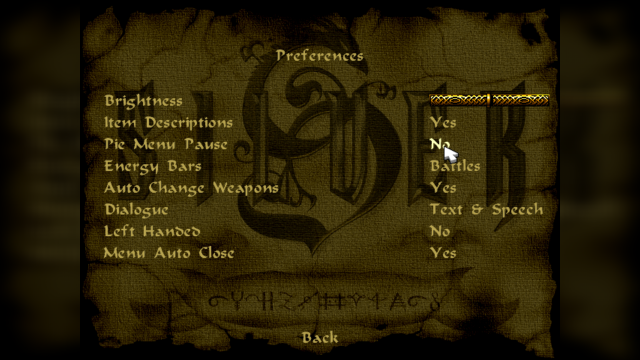 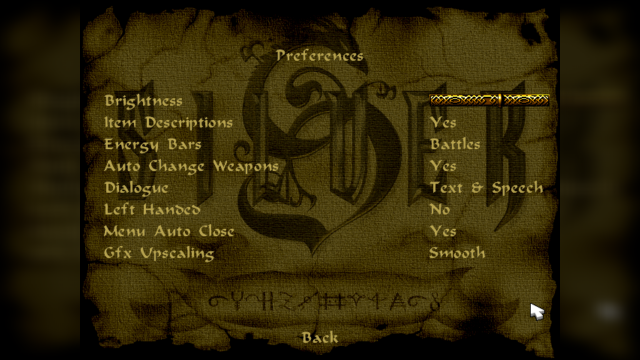 If you’re good at Spot The Difference, you’ll probably notice that in 1.20 there was an option called ‘Pie Menu Pause’ which isn’t there in the 1.21 options. 1.21, however, has gained ‘Gfx Upscaling’ as a setting.

Pie Menu Pause has been removed for now. I suspect that’s because it caused significant problems with the game for at least some users (including me). It’s a good addition in theory and I hope it comes back, because (as the name indicates) it automatically pauses the game when you bring up the Silver radial ‘pie’ menu for weapons, potions, and the like. This will be pretty helpful in some late-game combat situations.

Unfortunately, opening the menu with this option enabled in 1.20 caused all kinds of havoc with the backdrop images. Have a look at this for an example. 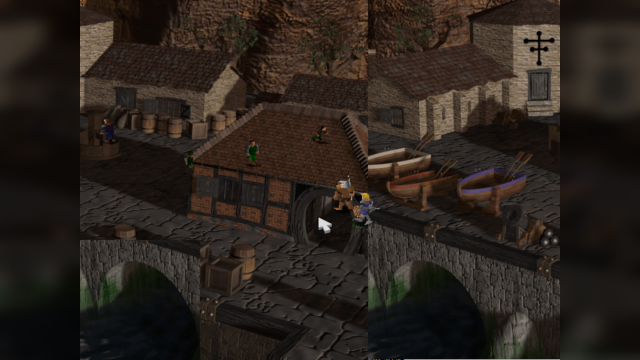 The triumphant return of split screen on PC.

Not really working as intended, there. I hope THQ Nordic can get it working and bring it back, but for now it’s been quietly retired as an option.

The new addition, as mentioned, is Gfx Upscaling. This offers Smart, Smooth, and Pixel Perfect as options. Those names are slightly confusing, because the character models actually look smoother (less aliasing) with the Smart option, not the Smooth one. Pixel Perfect appears to adhere as close to the original game as possible. Here’s a comparison. You can click any of them for larger versions and will probably need to if you want to compare character models. 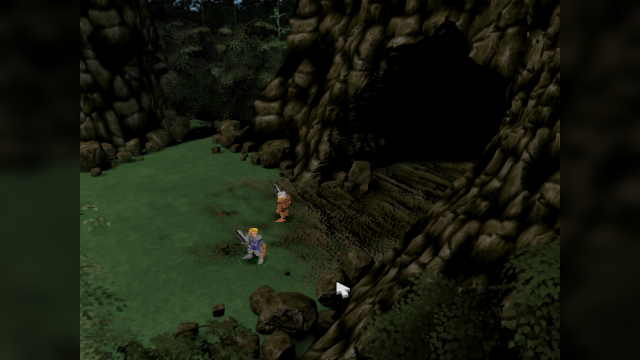 Silver – Smart (the smoother one) 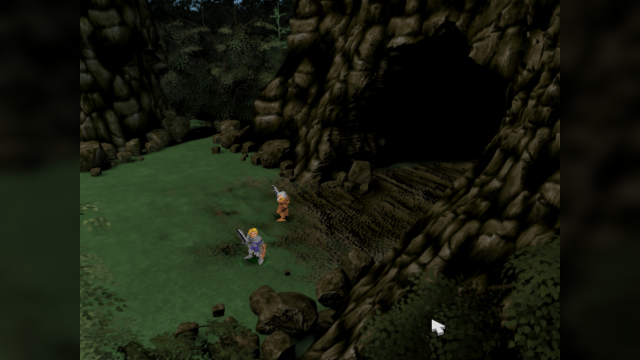 Silver – Smart (more aliasing, maybe the labels are the wrong way around?) 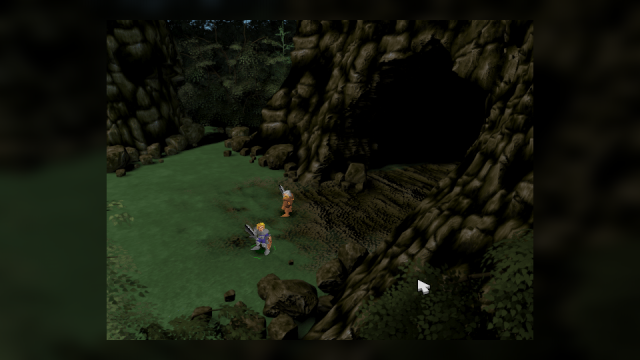 It’s down to personal preference whether you prefer the more ‘rounded out’ character models, or can put up with some low resolution aliasing. Having that option appear out of the blue with a recent patch is a decent sign that THQ Nordic are continuing to work on the release, anyway.

The vast majority of the other options (Brightness, the Left Handed option etc) are the same as the original Silver release in 1999. ‘Item Descriptions’ is new to this version, and puts a little icon and item name in the top right corner when you move over it on the menu wheel. Like the original, there’s also a separate sound menu for altering levels of Speech, Music and Sound Effects. 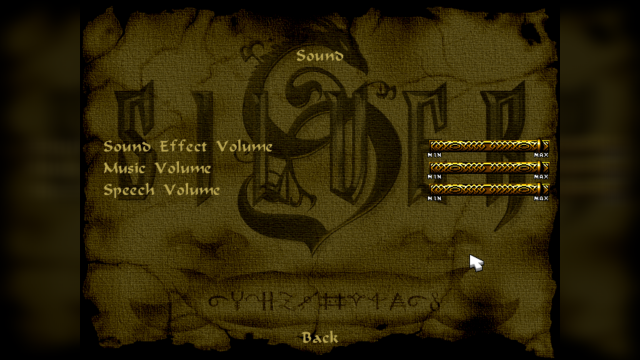 While on the subject of audio though, this version of Silver seems to have a persistent bug which causes pretty horrendous stuttering during the introduction cut-scene. I think there’s also something wrong with the music which plays on the main menu too, unless it loops in a much more janky way than I remember.

So far I haven’t run into any similar audio problems in the game itself, but I can’t confirm if that holds true for the entire thing. Since the title is receiving patches, I’d hope the intro stuttering can be addressed (especially as the file plays fine if you just run it from the game folder). 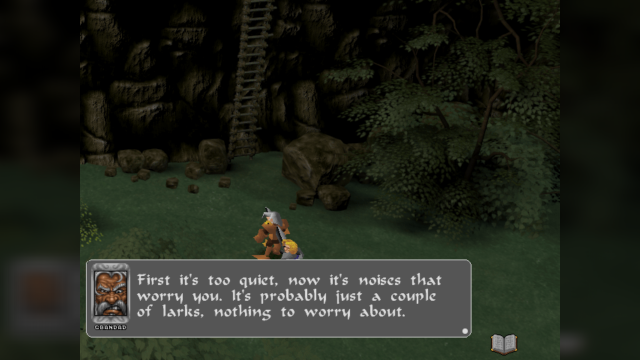 Silver is still in its original 4:3 aspect ratio in this release (albeit with the playing area upscaled to what I presume is the desktop resolution). It has a kind of echoed blur effect at the edges of the screen (shown above) which works fine, but it would be nice to have the option to toggle if off and just have black bars. The game still runs at its original 30fps. That’s probably hard coded in, so isn’t too surprising.

Hotkeys from the original are still present. For example, you can use the number keys to do things like select the last used weapon (7) or shield (0). 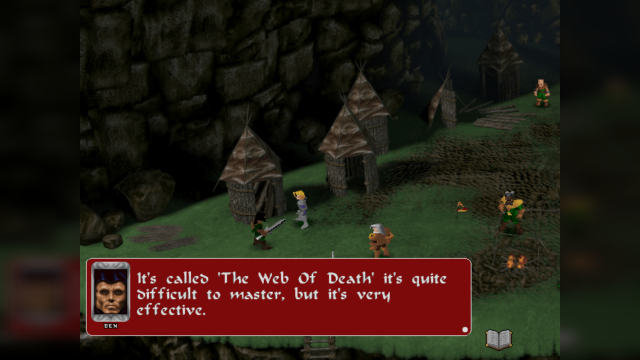 You’d hope so with that name, really.

If THQ Nordic continue to hunt down and sort out the issues that are causing things like the intro sequence stuttering and pie menu pause feature problems, then this version of Silver will have the slight edge over the more straightforward GOG release. GOG’s will still be DRM-free though, of course. Inclusions like the upscaled 4:3 backdrops and optional smoothing on character models are welcome, and (intro aside) the game seems to be running well on modern machines.

Those additions are relatively minor, and this release lacks anything like new control options (perhaps not necessary, as the Ctrl and mouse motion attacks still feel pretty fluid to this day), but at just under $5 (while it’s on sale at least) you’re getting a slightly nicer looking version of Silver on a contemporary platform. Though not a radical remaster, with a bit more continued support it’ll probably become the go-to edition of this title.

Cyberpunk RPG Rain of Reflections gets a first trailer

By Otto Kratky13 hours ago
Hardware