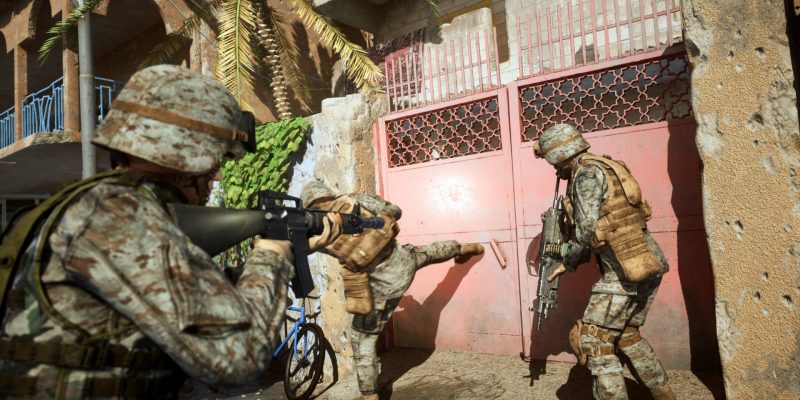 Six Days in Fallujah has risen from the dead and is heading towards a release thanks to two new developers taking on the project. The title, based on a massive battle during the Iraq War, will be headed by Victura Games and Highwire Games.

Originally announced by Atomic Games in 2009, Six Days in Fallujah was swiftly canceled by its publisher, Konami. At the time, Konami said that the cancellation was due to an outpouring of negative feedback. Here we are though, 11 years later and Six Days in Fallujah has two new teams working on it and a release window of this year.

In some way, Atomic Games is still one of the developers working on the release of Six Days in Fallujah. Victura. The developer behind the game’s revival, was founded in 2016 by former Atomic Games CEO Peter Tamte. Assisting in development is Highwire Games, which was founded by a group of Bungie veterans including Jaime Griesemer and Marty O’ Donnel, the former audio director and composer for the Halo franchise.

Time for a history lesson

The topic of Six Days in Fallujah isn’t exactly a small one, but some may have forgotten about it. The game takes place in 2004 during the second battle for Fallujah, a large city in Iraq. After the fall of Saddam Hussein, there was a massive power vacuum in Iraq, leading to instability and the rise of terrorist cells. One such cell should sound familiar, Al Qaeda. The infamous terrorist group swiftly took over Fallujah following the death of Hussein. While in control of the city, four American private military contractors were killed by Al Qaeda, with their bodies broadcast. In retaliation, the U.S decided a full-scale attack on Fallujah was required.

Instead of following the entire attack, Six Days in Fallujah will highlight the feelings surrounding the American-led operation. Working with U.S veterans that were in Fallujah, Victura will try to create a realistic image of the battle. “Sometimes the only way to understand what’s true is to experience reality for yourself,” said former Marine Sergeant Eddie Garcia, one of the veterans that is assisting in the game’s development.

So far, there’s no solid release date for Six Days in Fallujah. However, it is set to release sometime this year for both PC and consoles. More details on the game will be released in the coming weeks.

Intel’s finally getting aggressive on CPU prices thanks to AMD