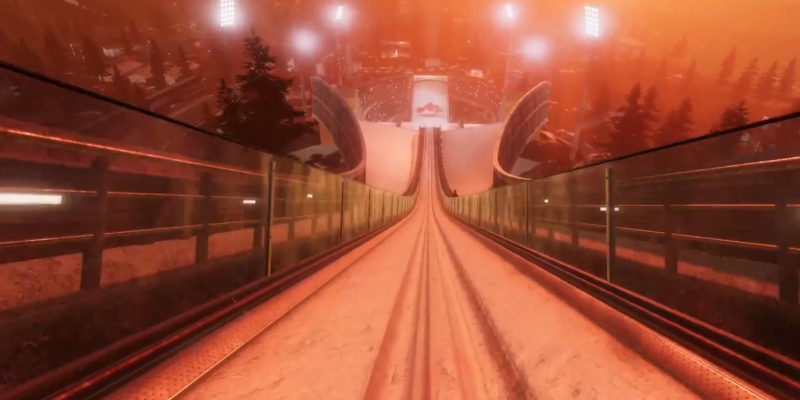 Generally, I do alright with VR games. I know how to position myself, and I only once broke a controller against a ceiling from trying to reach something high up. And I also don’t get nauseous, aside from that time I played Doom 3 in VR — though, that might have just been because it was Doom 3. However, there’s something about the trailer for Ski Jumping Pro VR that puts me on edge. I mean, it is full of jump scares.

Ski Jumping Pro VR is a game that takes its name quite seriously. It’s a VR game where you ride a pair of skis down a slow and jump. The better you perform, the higher the score. You can also earn cosmetic items such as gloves or boots. There is a career mode to complete, which allows you to aim for the snowy peak by participating in competitions — including events from more than 32 re-world venues. Ski Jumping Pro VR also includes a quick jump mode, which should be good for when you have a lot of people lining up to hit the slopes.

So high in the sky oh god I might die

The trailer for Ski Jumping Pro VR promises that the game recreates the feeling of “height and speed” from pro jumping. And I certainly can get an idea for how it feels, as well as the anxiety. Now, I wouldn’t say I have a fear of heights, but the trailer does do wonders for my fear of flying high in the air without the comfort of a sea of pillows below me. I can only imagine just how nerve-wracking the game can be once the goggles go on. I still remember how my stomach dropped while playing Aircar.

Get rich in Tropico 6’s first DLC, The Llama of Wall Street