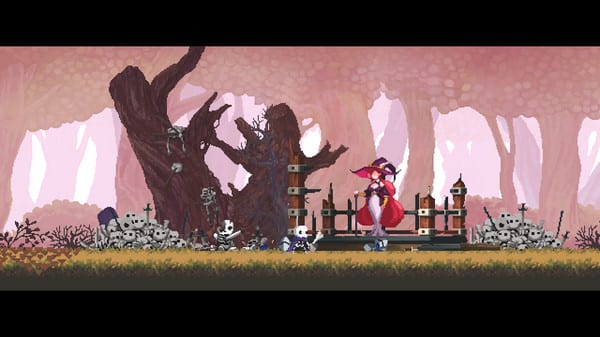 Those of you hoping to get your hands on an old-school hack-and-slash game should give SouthPAW Games’ latest a look. The developer, alongside the publishers at NEOWIZ, have announced that their latest game, Skul: The Hero Slayer, has arrived on Steam Early Access.

Featuring beautiful pixel-art graphics that remind players of a classic gaming era, Skul also comes with fast-paced gameplay. And fans can try it out now, as the game is available for the discounted price of $17.99 USD.

So, what’s Skul: The Hero Slayer all about?

In this game, the Caerleon Empire has overtaken the land and captured its king. It’s up to no good, so an unlikely hero must rise in order to counter them. Enter Skul, a skeleton-based warrior that can slice through foes like they were sashimi.

Over the course of his journey, Skul is able to swap out the skull on his head. By doing so, he opens up the ability to become one of 20 different characters. Each one has special techniques that will help push Skul further toward his goal. Along the way, he can unlock additional combos and abilities, which he’ll want to help him take on the game’s devastating bosses. The trailer below lets players know just what kind of adventure they’re in for.

As the game enters Early Access, Sang Woo Park, CEO of SouthPAW Games, indicates that bigger things lie ahead. Over the course of its development, the team will pay “closer attention to our community’s feedback” in order to create the game that its fans desire. Based on what we’ve seen so far, though, it’s definitely living up to its skullish hype.

Those interested in picking up Skul: The Hero Slayer can do so on Steam Early Access. It’s 20 percent off its price for a limited time, so don’t miss out if retro adventure is your thing. You don’t want to be a numb skull on this one.