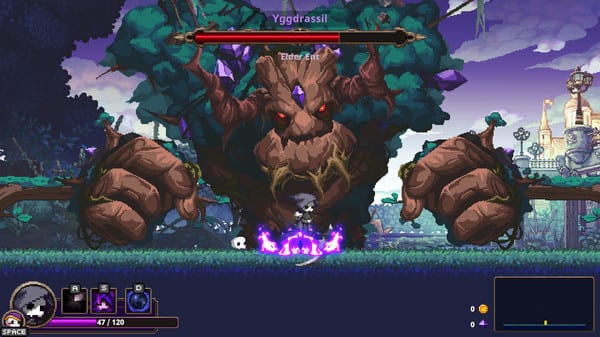 For those of you in need of a villain this holiday season, Skul has what you need. NEOWIZ, in conjunction with the developers at SouthPAW Games, announced today that its latest title, Skul: The Hero Slayer, will debut on Steam Early Access this month. The game will be available to players on February 19 (though “Planned Release Date: February 18” is also oddly stated), and those interested can check out the official Steam page.

The game follows a skeleton-ish hero named Skul (get it, Skull?) who vows to save his king from capture. Along the way, he’ll have to deal with the bothersome Caerleon Empire, as well as a group of Adventurers that want to kill him.

Fortunately, Skul has a secret weapon — his own noggin. With the ability to change across different skulls for his body, he adapts to different skills. He’ll use these to build up combo attacks and unleash special abilities. He’ll need them, too, as some big foes will stand in his way.

Sang Woo Park, CEO of SouthPAW Games, said the developers will be “actively collaborating with our community” throughout the game’s Early Access period. During this time, they’ll shape the game to be better, while adding “new levels and bosses” along with “additional playable characters.”

Skul: The Hero Slayer’s trailer is below, and it showcases the game’s delightful old-school style, combined with its visceral combat. It looks to be a fun treat for fans of sidescrollers, as well as those that truly enjoy wanton destruction.

Those that are interested in checking Skul: The Hero Slayer can add it to their wishlist and also learn more about the hectic, bashing gameplay and bosses that await. One thing’s for sure — you’re going to need a warrior with a good head on his shoulders.

EA is back on Steam, but it’s charging more for its games

Call of Duty 2020 is confirmed, but we’re not sure who’s developing it

By Matthew Loffhagen3 hours ago0
News