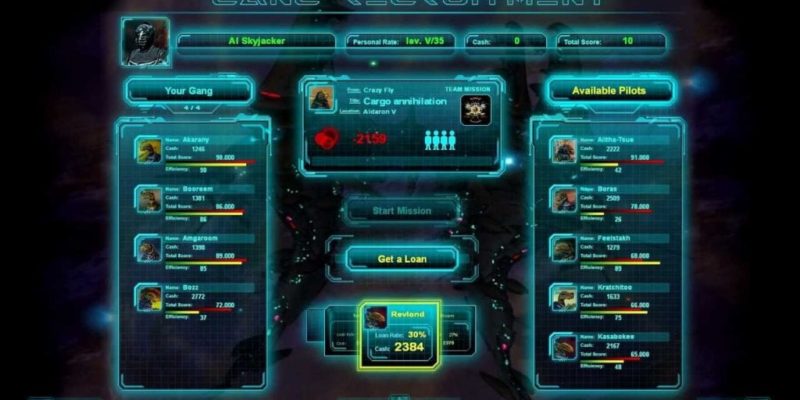 We went through years of having no combat space sims, and now – thanks to Kickstarter, and proof of public interest – there’s about ten billion of them. Skyjacker is the latest game vying for your funding, and in an attempt to get you hyped up, developers Digitilus have released a co-op gameplay video.

Skyjacker casts you as a sort of freelance pirate in the universe of the I’ve-never-heard-of-this-before Abyss Lights book series, accepting missions from the Pirate Stock Market and then blowing stuff up. You won’t be doing deliveries; you’re a pirate, so you’ll be delving into assassination, sabotage, kidnapping, robbery, and a little bit of espionage, and you can either do these missions solo with AI partners or in multiplayer with other players. You can even create your own jobs with an in-built mission editor.

There’s full component damage (blow up enemy engines to stop them fleeing, etc.) and in a neat touch you’ll be able to salvage the parts of ships that you don’t blow up. For that matter, you can swap out the engines on your own ship to play like an arcade game, or to play with full momentum and inertia.

Digitilus are seeking $150,000 USD to finish the game up; at the time of writing they’ve got $22k pledged and 28 days to go. They’ve got some impressive stretch goals if they manage to exceed their funding target, too: $200k brings a ship editor, while $400k adds a new campaign that’ll allow you to fly seamlessly into planetary atmospheres and dogfight above planet surfaces. There are further goals right up to $1.2 million, although Digitilus notes that it’s not essential that they hit these goals during the Kickstarter run as they’ll be allowing direct funding through their site through 2014 in the hopes of adding more of these features.

Check out the video below and the Kickstarter over here. $20 will get you the game, while $30 will also net you access to the beta.