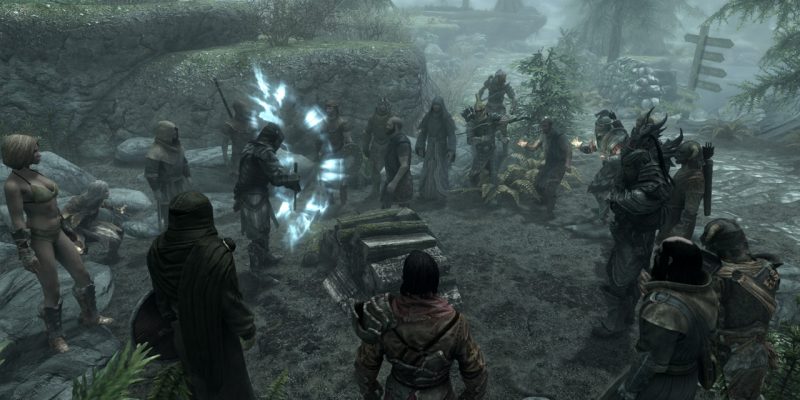 The ambitious mod that turns Skyrim into a multiplayer experience launched over the weekend. Skyrim Together Reborn allows players to enjoy Bethesda’s classic RPG with each other in co-op. To say it’s popular is an understatement, as it has garnered over 90,000 downloads since its release on Friday.

Skyrim Together has been around in some form for quite a while. The older version of the mod is called Harbor and is likely the one most are familiar with. Reborn is in some ways a sequel to Harbor and features rewritten code and offers an experience that is “significantly better.” You can find specific details about Skyrim Together Reborn via the mod’s FAQ page. It’s impressive how fans are still doing cool things with Skyrim over a decade after its release. Just a few months ago, we saw what the game could look like in Unreal Engine 5.

Experience Skyrim with a friend

If you’ve ever wondered how fun Skyrim would be with someone else, this is the mod for you. Skyrim Together Reborn lets multiple players group up together in co-op and tackle quests with each other. For a mod that’s been put into a strictly single-player game, it works surprisingly well. It even supports PvP between players, so you can finally find out who the strongest Dragonborn is.

The setup process for the mod is more involved than some others for Skyrim, but that’s hardly surprising. Thankfully, The Together Team, the mod’s developer, has put together an in-depth installation guide that goes through the process step by step. It’s highly recommended that you watch the video before trying to install the mod so you don’t miss anything crucial.

The Together Team has also been quick to set expectations for the mod. The team posted on Reddit before the mod’s launch to shine a light on some key aspects of Skyrim Together Reborn. They made sure to emphasize that “the mod won’t be perfect.” Any mod of this scale is sure to have bugs and problems once it reaches players. This isn’t shocking, and it’s good that The Together Team set this expectation straight away.

This Reddit post also mentioned that Skyrim Together Reborn is now an open-source project. This means it’s up to the community to continue updating and providing new features for the mod. Another Reddit post outlines the future plans for The Together Team. Understandably, they’re is taking a break from the project and look forward to branching out to “other projects.” It’ll be interesting to see what the community does with Skyrim Together Reborn now that it’s out in the wild.