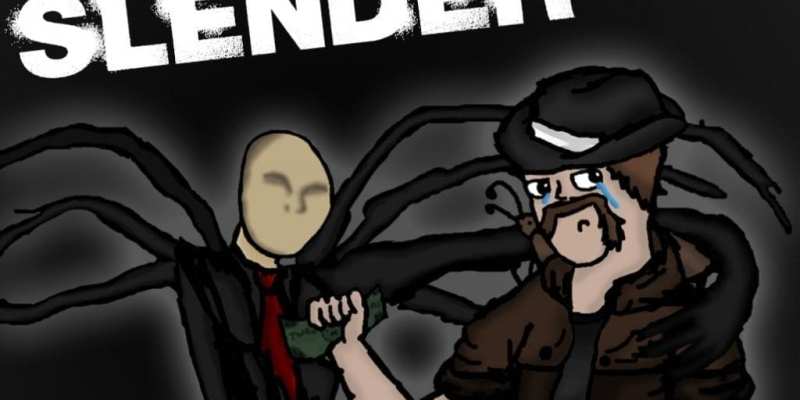 Oh Slender. I played it only once: I lost the game after only some 10 minutes of exploration, and now I sit here, erratically mashing the keyboard with my quaking hands.

Let me explain the goal of the game: you must find the 8 pieces of paper. The challenge: avoid the Slender Man.

Let me brief you on that one: the Slender Man is a modern mythological creature of folklore, much like the Chupacabra. The whole thing is actually really silly, and the Slender Man himself looks almost pathetic under analysis, but that’s not what the game is about.

Slender is about not seeing the Slender Man. You walk through a Forest, looking for 8 shiny pieces of paper, each with a cryptic message of doom. You try to conserve your stamina and your flashlight’s battery while also trying to find your way, and you are constantly turning around because of the noises, but all you ever see is a bunch of trees everywhere, and of course you feel lost because of so much twisting and turning, and suddenly you spot a landmark of sorts, so obviously there’s something of interest there, so you don’t really want to but you approach it and find some paper that says “IT FOLLOWS”. You grab it, and look around to see nothing around you, so you keep going, and you hear real noises this time, and you think you saw him but that was just some swaying grass, and you find another landmark, some building, and you reach around it, and you find another paper: “IT ALWAYS WATCHES, BUT IT HAS NO EYES”. You hear more noises now, so you walk away quickly, try to get your bearings, but you still see nothing, and you know this shouldn’t be scary but it is, and you spot another landmark when YOU HEAR A BLEEP AND STATIC AND YOU TWITCH AND HE’S THERE SO NOW YOU RUN

Then you get ahold of your self, and you turn around and there’s nothing there anymore. You turn again to find that there’s still nothing around you. So you walk a little bit and point your flashlight to the side and OH GOD THERE HE IS AGAIN, but you don’t think he saw you so you turn right round and walk, but you think he’s still following so you look again and he’s nowhere anymore.

Then he is right there when you turn back.

There is no falling into predictability with this game; the Slender Man always watches. There is no technique to win, no preferred tactic to run away. You think if you give him your back he’ll never catch up with you? He’ll just pop in at your side. You think you just need to turn off the flashlight? When you turn it back on you’ll be surprised. You think he only moves when you look away from him for a long time? He doesn’t care, he’ll just “jump” straight into you the moment you look away. Or not. He doesn’t care, he’ll do what he wants, and he’ll kill you when he wants to.

The worst part is that you never see the Slender Man move – he might as well be a scarecrow.

So surely there is some depth to this game, right? Some bars to fill up, some inherent mechanic fun to it, some achievements to unlock? Some doors to open, some platforms to jump on, some clues to be found? Nope, there is none of that. There is no “game” to this game at all. It’s less like Silent Hill or Amnesia and more like Woody Allen’s orgasmatron, except your body fluids will come out the wrong end. So why play it then? Why not just go to a haunted mansion instead?

Because this is the “new” haunted mansion. This is what all the kids are talking about, the cool new thing everyone has to experience. It’s the new crazy ride at Six Flags, and everyone should try it (after all, it’s free).

And when you try it, please record yourself.

25 Tips That Will Improve Your Gaming Skills Considerably