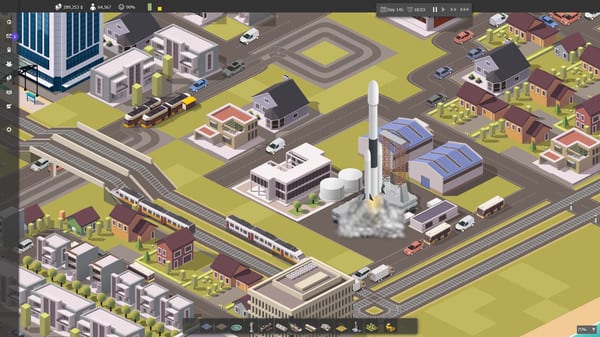 Today Ambiera announced the release of their latest game, Smart City Plan. The full version is slated for an early 2020 release on Steam and is currently available for preorder on the Ambiera website.

Smart City Plan takes city simulation games to a greener level. In this modern city-builder, players are tasked with creating the ideal “smart” city. This means developing a city that is both sustainable and capable of meeting the needs of its citizens.

Players begin by creating a few roads and specifying a few residential zones where citizens can begin building homes. Typical city simulation features will be included such as building various types of public transport, roads, and residential and commercial areas. Where Smart City Plan differentiates itself is in the policies and choices players can make.

A majority of the policies are related to creating a cleaner, greener city. From water and energy usage to garbage management, players must be environmentally conscious to build a successful city. The game also takes law-enacting a step further and includes the option to regulate items like gun control and pollution. Additionally, there is the option to literally turn your city green. A policy known as “green living walls” requires larger buildings to build vertical gardens along their walls. After creating the ideal city, players can attract new and exciting industries like space companies.

While Smart City Plan is several months away, the game can already be purchased in advance. By going to the Ambiera website, players can preorder the game for €12.99. The money earned from preorders will help support the development of Smart City Plan. Players will also receive access to the beta version when it is ready and a Steam key upon official release. In addition, players can follow the developers’ Twitter to receive new updates on the game.

Banjo-Kazooie creator wants to gauge interest for sequel with remasters