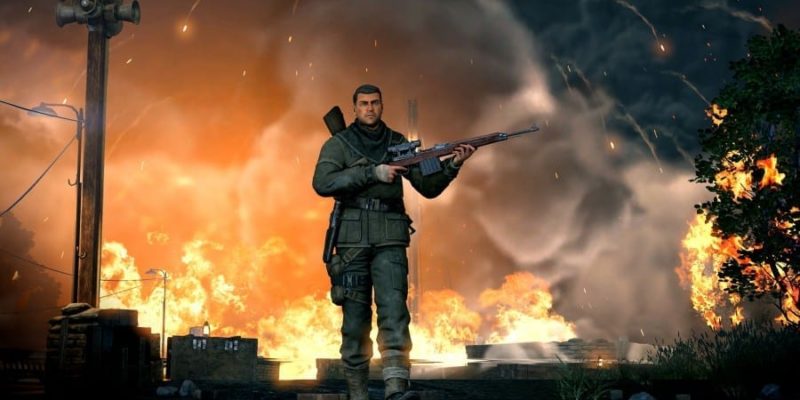 Shooting Hitler and other Nazis in the balls is the equivalent of good afternoon fun. It comes as no surprise that Rebellion will continue with offerings that take you back to World War II. As Karl Fairburne, you’ll be back to taking out fascist baddies in Berlin in no time since Sniper Elite V2 Remastered will be releasing this May. Check out the comparison trailer for the original and the remastered versions below:

Right off the bat, you’ll notice improvements to textures, environmental detail, lighting, and shadows. Even weather effects look more noticeable now, and the burning ruins of Berlin don’t look as drab and dreary as before. Well, they’re still dreary because they’re ruins, but you can catch my drift. And yes, Sniper Elite V2 Remastered will also support 4K display resolution.

The remastered version will also include all the DLC from the original game that released in 2012. You’ll also be able to play the campaign and multiplayer matches as one of seven characters from Rebellion’s other shoot-em-all-in-the-head series, Zombie Army. Multiplayer even got boosted, now with up to 16 players in certain modes. Perhaps the one we’re looking forward to the most is the inclusion of Photo Mode! This will even let you capture each frame from your X-Ray kill cam moments.

Sniper Elite V2 Remastered will release on May 14, 2019. It’s currently priced at $34.99. However, if you were able to grab the original game whenever it was free on Steam, or from previous Humble Monthly offerings — heck, as long as you own it — then the remastered version has a discounted price of $9.99.

You can pre-order now via the Steam store page. We can only hope that all these visual changes make for a refreshing experience, something which Assassin’s Creed III’s remaster wasn’t able to do recently. All the graphical changes would be for naught if Karl Fairburne and enemy soldiers already have that thousand-yard stare from the get-go.