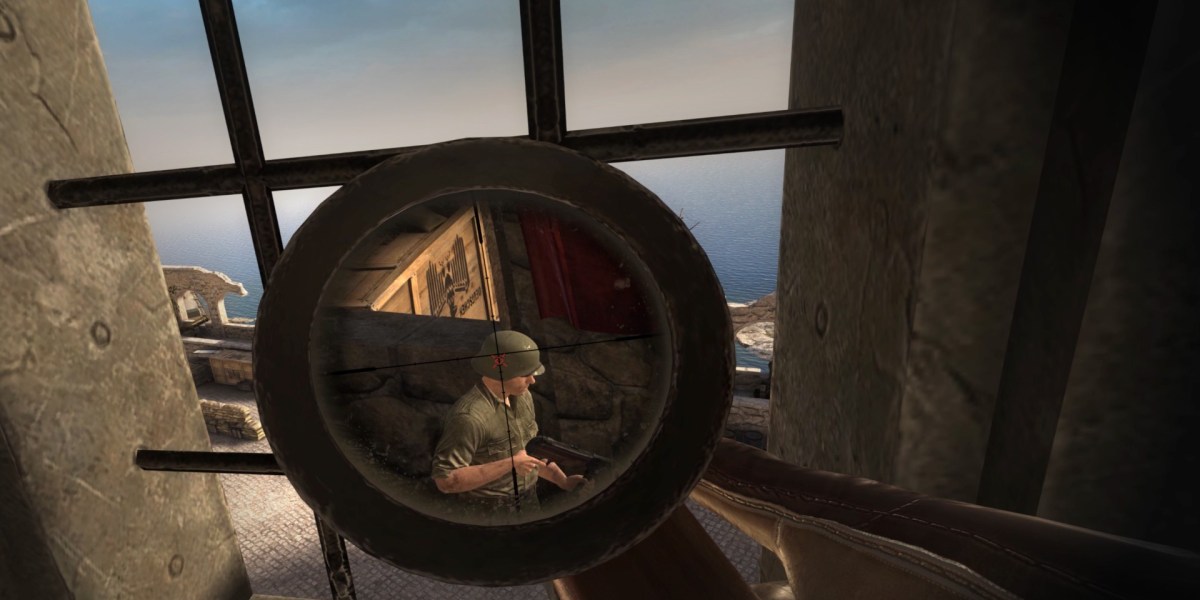 If there’s something that VR platforms do better than anything else, it’s shooters. There is just a visceral satisfaction to pulling off that perfect headshot in first-person, that’s impossible to top. Thankfully, certain franchises have made the dome pop a specialty, such as the recently released Sniper Elite VR. Can this crimson-soaked carnival of carnage resonate as much in first-person as it did in third-person?

Instead of starting the game as the series’ main protagonist, Karl Fairburne, you’re instead lacing up the boots of another veteran of World War II. This character, who remained unnamed to the best of my recollection, fought in the resistance against the Germans in Italy. The narrative is framed through the eyes of this old man, reflecting on his time before, during, and after the conflict. He begins to read through the journal of his experience during the war, which in turn brings the world of Sniper Elite VR to life.

Aside from a handful of framing scenes, a majority of the plot is told from the modern perspective of this elderly gentleman, reflecting on the most exciting moments of his combat experience. Opening the journal and turning to the next page is your portal into the action. It certainly appears that this guy went through some serious shit and has seen some rather horrific things. To make a long story short, just know that you are hellbent on killing as many Nazis as possible, which seems to be pretty on brand for the Sniper Elite franchise as a whole.

I played Sniper Elite VR using the Oculus Quest 2, connected via AirLink to my PC. This allowed me to get the optimal experience of playing on PC, without any of the literal strings (or in this case, cords) attached. The increased range of motion allows you to more deeply invest in the experience, at least physically speaking. Instead of using the left control stick to navigate around the environment, I was instead able to make full use of the wide-open space in my living room. 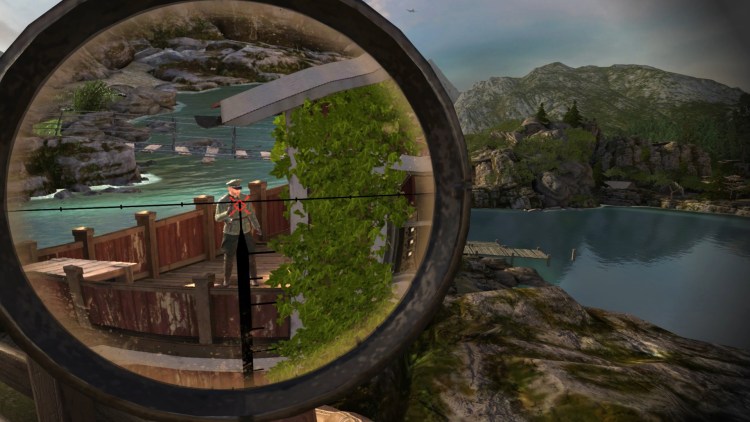 My poor wife must have thought I was losing my marbles, as I scrambled, squatted, and clambered all over the room. There even came a point when I was literally on all fours, crawling around on the floor, as I desperately attempted to cling to my last slivers of life. Pretty much the moment my vision started graying out, I took the very strong hint to get into cover, and boy did I! It was far more immersive than I ever would’ve imagined, and led to numerous instances of me getting legitimately winded. Simply put, the VR aspects of the design enhance the experience, tenfold.

Part of leaning into the first-person design is the variety of ways that Sniper Elite VR interacts with each piece of the arsenal. Every weapon has a slightly different quirk that you need to understand before you can be truly effective. In the case of most rifles, you need to manually cock it with your off-hand prior to firing each shot. Additionally, the reloading process is necessary each time the magazine is emptied. This process is also unique for every firearm. The key is to make sure that you’re at least familiar with everything included in your base loadout.

The gameplay itself was far more generic arcade action than I was anticipating. The jump to the first-person perspective almost forces their hand and makes this approach rather unavoidable. However, considering this is a franchise that prides itself on allowing players to dispatch an enemy’s trouser tackle at any time, this is probably par for the course. 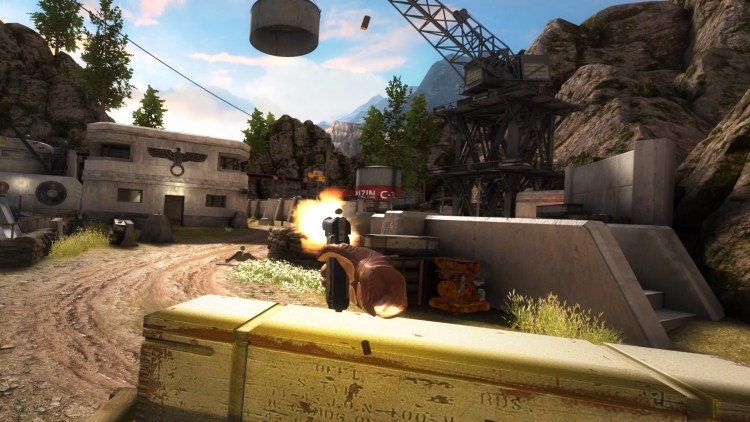 It’s fairly rare for VR games to be as long as its standard console or PC counterpart, yet somehow Sniper Elite VR is the exception to the rule. Clocking in at north of 10 hours, the campaign itself spans a whopping 18 different missions. After an initial batch of shorter tutorial-centric missions, it doesn’t take long before missions start to open up.

One could make the argument  that several missions are probably too long. Sure, the game has manual checkpoints scattered throughout, allowing you to manually save progress with the press of a button. But these almost felt too far separated from each other. This led to my favorite type of gameplay cycle: the infinite death loop. If you couldn’t tell, that was pure sarcasm. There were just too many scenarios where I was stuck replaying the same ten-minute chunk of a level, only to be picked off by some bastard that I didn’t even know was there.

While gameplay loops are never fun, you know what’s even less fun? The killcam. That’s right. One of the marque features of the franchise as a whole is a liability when playing in VR. The abrupt transition between firing a shot and then having to re-experince the the x-ray aftermath immediately pulled me out of the experience. I understand that it needed to be there, otherwise fans of the series would pitch a fit. But the question should be genuinely asked: is it worth breaking the immersion, just to show that I nailed this poor dude right in the squishy bits? I would argue, that no, it shouldn’t. 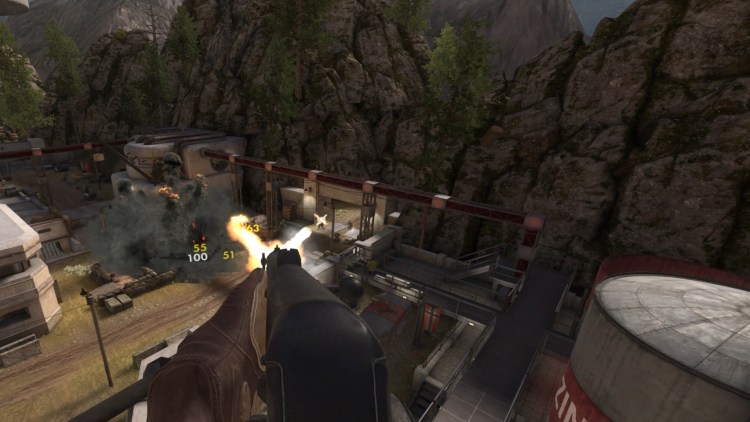 Probably the least appealing aspect of playing Sniper Elite VR is the control scheme. Those on the PlayStation platform have the option of utilizing the platform’s Aim Controller. This is the ideal way to play, as it simulates the form factor of a majority of the weapons you’ll be using. Unfortunately, for those of us in Oculus or PC VR land, we have to try and pantomime the same motions, only using two controllers separately.

By their nature, the Oculus’ motion controllers are lightweight. In this case, that was somewhat of a disadvantage. Imagine trying to aim down the sights with one hand on the trigger and the other on the stock of the rifle. Now picture trying to emulate the same motions using two separate, unbound controllers, while also trying to keep both controllers perfectly level. The end result is a very tedious cycle of attempting to line up a shot and aligning your controllers in precisely the same position, only to be completely knocked off target by an incoming shot from other adversaries.

As much as I wanted to love Sniper Elite VR and its meaty campaign, several nagging issues proved to be a thief of joy. When the mechanics work as intended, the experience dramatically improves. However, certain elements of the design needed more consideration when retrofitting gameplay to the VR genre as a whole. If we were on a gun range, this would probably be considered a rather tragic misfire.

Though initially promising, the mechanics of Sniper Elite begin to fall apart once the dual controller setup for Oculus comes into play. This could certainly be remedied in the future through the introduction of a proper gun peripheral, but as of now, we're stuck firing blanks.

Apogee Entertainment reveals Below the Stone and Dead Fury