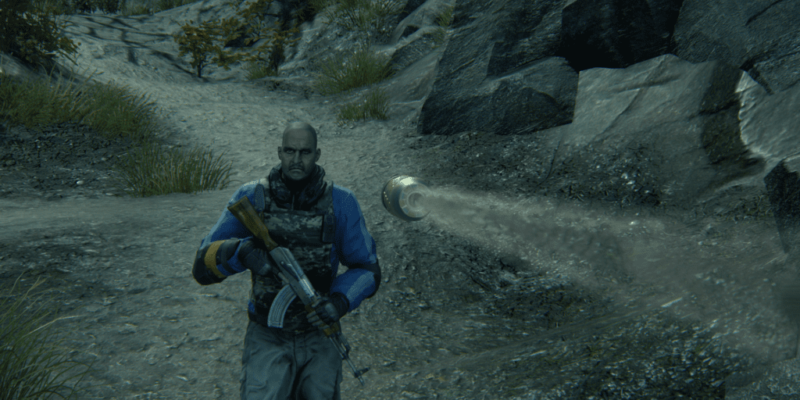 Nobody forces Sniper Ghost Warrior 3 protagonist Jon Snipington (okay, North) to follow a timetable. The game is out already on Steam, a few hours ahead of the 25 April schedule. Thanks to the slightly earlier arrival of review code I’ve been able to spend a couple of hours with it in my sights, weighing up whether the technical aspects deserve to live or die.

Well, that’s perhaps a bit dramatic. But I have been pondering whether Sniper Ghost Warrior 3 is up to the expected PC standards. For reference, I’ve been playing this on the following special deep cover black ops box: i5-6600 / 16GB DDR4 RAM / 4GB 380X / Windows 10. I’ve also got AMD’s latest driver offerings, 17.4.3, installed.

The game downloaded an additional 4GB update to the supplied review code, so I’m pretty confident I was playing the launch build the whole time. Join me now in drone-scouting the options menus.

Update 27 April: A new patch has added an FOV slider, motion blur toggle, and made further fixes to a few things I mention in this piece. Keep that in mind when reading. 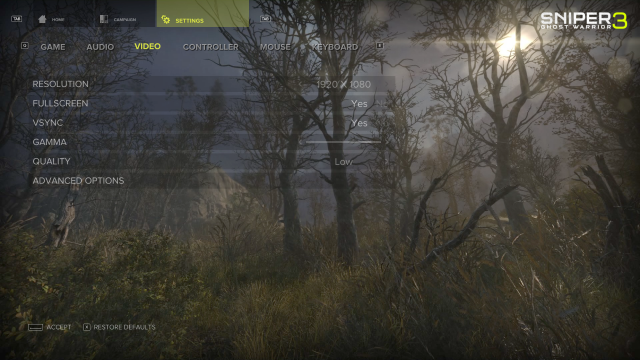 The game doesn’t hold back on resolution options, offering all kinds of exotic aspect ratios from times past. Interested in 1280×1024 (5:4) or 1152×864 (4:3)? Sniper Ghost Warrior 3 has a resolution for you. I used the popular 1920×1080 myself, but 4K is there as an option for people with enough GPU horsepower (either through downsampling or on a 4K monitor). The one thing I’m unsure of is whether ultra-widescreen (21:9) has any meaningful support.

I appreciate the inclusion of 800×480 as a resolution option, too. Both because I always support broad options for scaling to both lower and upper end PCs, and because it means we can all take a trip down resolution memory lane with images like this one. 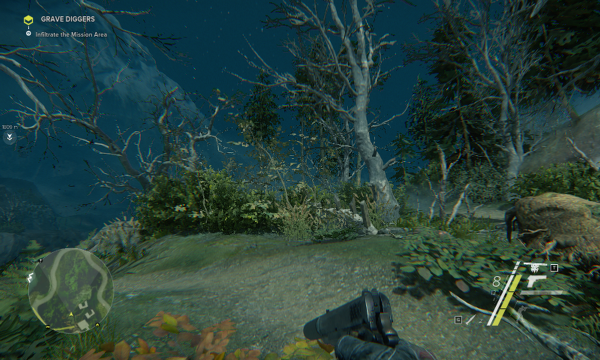 Are we all done imagining an alternative timeline where Sniper Ghost Warrior 3 came out in 1998? Great.

Fullscreen is just a Yes/No toggle, so no special borderless windowed mode I guess. In the Beta release, turning on Vsync was the kiss of death for the game’s frame-rate but that’s no longer the case in the full version. Hooray. Let’s move on to those tantalising Advanced Options. 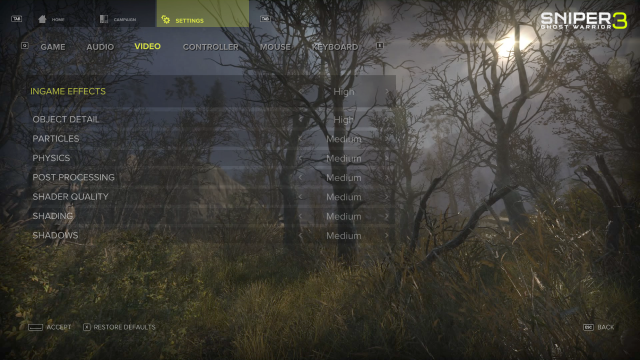 If you played the Beta, these will be familiar. If not, they won’t exactly take an age to read through. Each one offers Low, Medium, High, and Very High. I’ll get further into how the game scales in performance on those settings in a later section, but for now here’s a straightforward comparison between default Low and default Very High. They’re taken in roughly the same spot (you have to reload to get graphics changes to ‘stick’ so shots from the exact same place are quite hard). You’ll probably need to click to make them larger to spot meaningful differences. 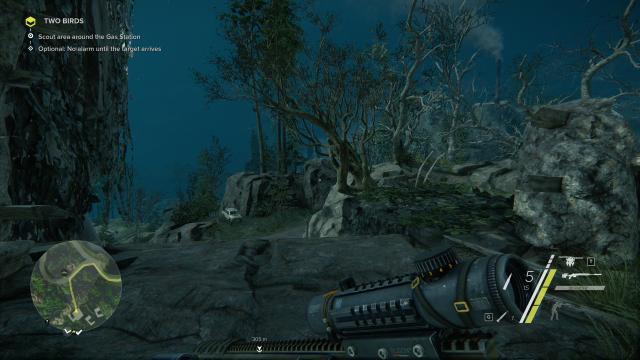 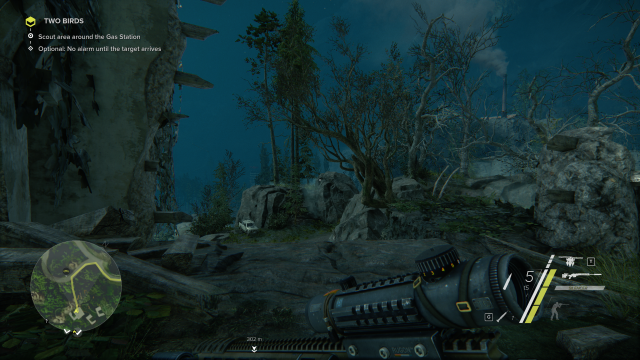 And here’s the default Very High.

People who played the Sniper Ghost Warrior 3 Beta could be rather disappointed at the lack of new options. It means, as in the Beta, you can’t separately turn off things like Motion Blur (boo), or Chromatic Aberration (all of the boos). Nor will you find any discreet anti-aliasing options. There’s also no FOV slider, so you’re stuck at the rather low default one chosen by CI Games. I’m not exactly sure what that is, but at a guess I’d say about 60. Not ideal.

Since it’s a CryEngine based title there might be potential for making .cfg or .ini changes, but that’s no excuse. A lot of these things should have an in-game toggle. Speaking of which, here’s the HUD/UI options menu. 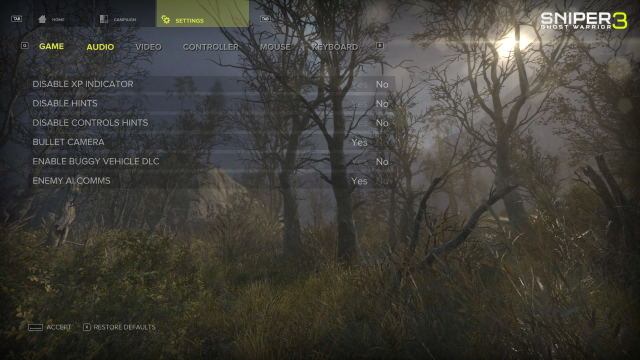 Not awful, but, again, missing quite a few desirable options. Since the Beta, players have been requesting a toggle for holding or clicking to aim-down-sights. There isn’t one. You still have to hold for ADS. 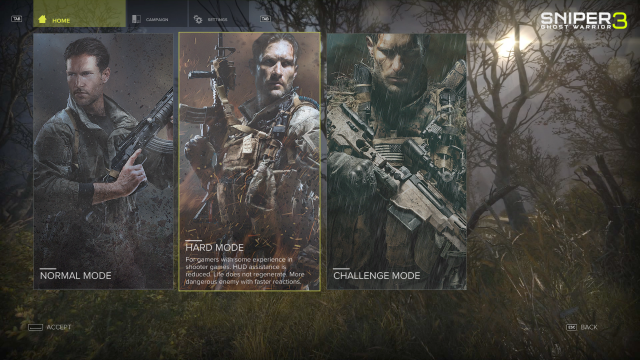 A lot of what shows up on the HUD seems to be defined by the selected difficulty level (see above). That’s fine and all, but it would be great to be able to customise this further. It’s possible that somebody playing Sniper Ghost Warrior 3 on Normal would still like to, say, turn off the mini-map. 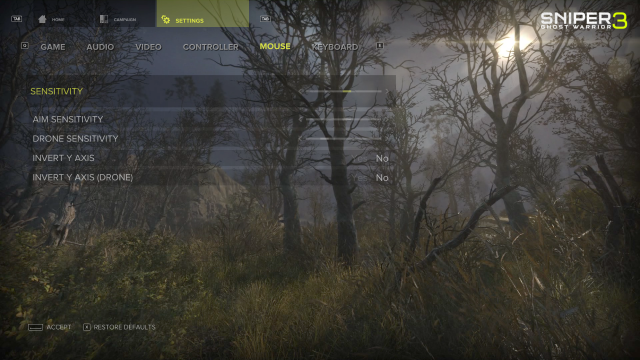 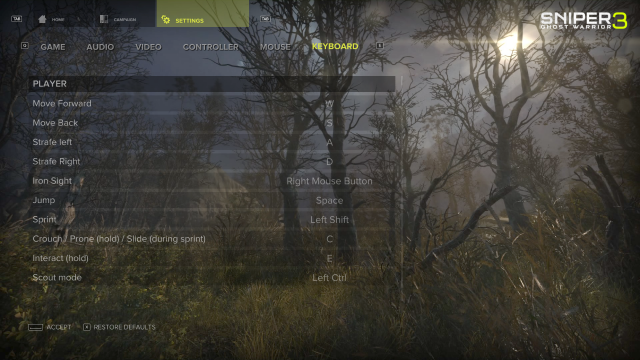 Not too much to complain about with the mouse and keyboard controls that I can see. Having distinct mouse sensitivity sliders for looking about and aiming is a plus. As is having one for the drone. You’ll notice there’s no toggle for disabling mouse acceleration here, but I don’t think the game applies any. I’m not always hugely sensitive to that problem though, so don’t take that as absolute confirmation.

Keys can be rebound, and vehicle controls accept separate inputs (so if you want to keep WASD for walking around, but use something different for driving, you can). Oddly though, you can’t rebind Accelerate and Decelerate. Those are stuck on W and S respectively. That’s a weird bug, I’d imagine.

Moving on to performance then … oh, hold on, Sniper Ghost Warrior 3 is still loading. I’m sure it’ll be done soon. Aaaany minute now. Alright, sod it, I’m going for a drink, I’ll be back after the next screenshot.

That’s not fair Jon, he clearly believes in scarves.

Yes, Sniper Ghost Warrior 3’s initial loading times are rather lengthy. It’s kind of CI to pay tribute to the 35th Anniversary of the launch of the ZX Spectrum, but I’m not sure including equivalent cassette tape loading times was the best decision.

Launching into the campaign from an HDD install took me close to three minutes. That happens every time you load up the campaign from scratch, so you can just imagine how much I enjoyed restarting to test different combinations of graphical options. The loading times for things like fast travel or reloading from death after this initial load are fine (the usual few seconds), and I expect installing on SSD would help, but, still, that’s pretty ridiculous. 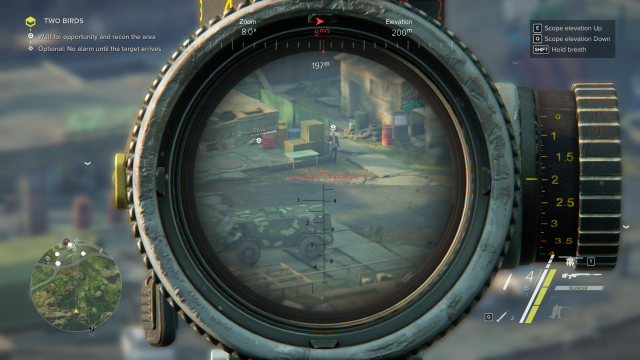 I just realised I haven’t used any images of actual sniping yet. Let’s put that right.

Once you’re actually in the game, performance is at least an improvement over the Beta. Before anybody gets too excited about that sentence, remember that the Sniper Ghost Warrior 3 Beta occasionally ran like someone who’d been the recent recipient of one of Jon Snipington’s kneecap specials.

Compared to that, the full version runs at a tolerable clip. With everything set to Low, I was getting 70-80fps for the most part. Default Very High, in contrast, was more like 30-40. The sweet-ish spot for my PC seems to be around the default all-Medium settings, which were giving me bang on 60 in a lot of areas.

That doesn’t tell the entire story though, because as soon as I got in the jeep and tried to drive anywhere in Sniper Ghost Warrior 3’s freshly open world the frame-rate (and frame-pacing, it seemed) got quite unhappy. Driving anywhere instantly shaves a good 10fps or so off whatever average you get just walking around on foot. The game also begins to stutter a great deal more (presumably because it’s having to funnel bits of the world in and out of memory at a faster rate). 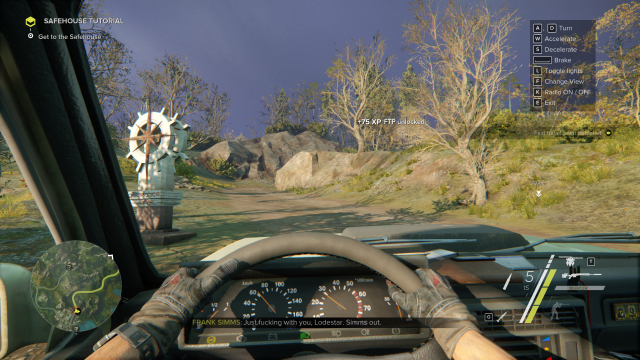 You can make those driving controls go away. You can’t get your frame-rate back though.

Frame-pacing in general felt a little off for me whenever the frame-rate strayed from exactly 60. Variance in either direction made the game feel strangely sluggish, so turning on Vsync actually turned out to be unambiguously helpful.

Sniper Ghost Warrior 3 has problems in other technical areas too. There’s a weird, persistent message about using one of the mouse buttons to ‘vault or melee’ whenever you sprint somewhere. Except you don’t use the mouse to do either of those things. While not exactly a bug, I’m sad that the highly repetitive ‘alerted AI’ voice barks are just the same as they were in the Beta.

It also feels like parts of the opening may have been reorganised or reordered. After the first proper open world mission, Jon Snipington receives a Comms message that there are people moving around inside his safe house. Jon says he ain’t afraid of no ghost (no, really), and the game sets up the ambiguity of whether these visitors are friends, or an ambush.

Except then the tutorial confirms that they’re definitely friendly by chiming in with a message about how this would be a great time to fast travel back to your safe house. Oh well.

And hey, with fast travel points you don’t need to use the jeep so much.

Later on I’d actually had a pretty enjoyable time clearing Georgian Separatists (I think; there seems to be a civil war and proxy war going on so it’s hard to keep track) out of a run-down church. I got to choose my direction of approach, how to scout out the area (with scope or with the drone), where to set up, whether to close in once the enemy ranks had been thinned a little; the sort of freedom of choice never found in Ghost Warrior 2.

Then the ‘you are near death’ heartbeat sound bugged out and started playing constantly, followed by a soft-lock crash when I tried to explore the church interior for goodies and got stuck forever on some wooden scaffolding. 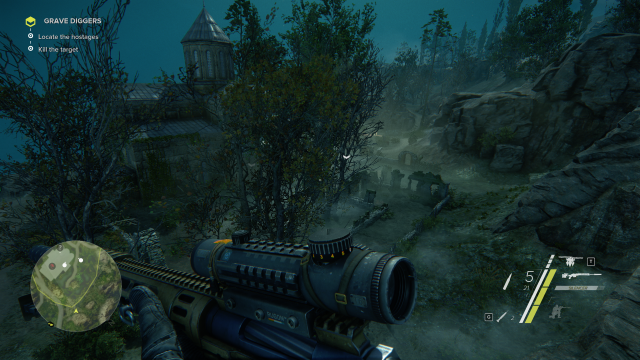 I was quite enjoying this bit. Until it broke.

I can’t say for sure whether that level of jank continues throughout the rest of Sniper Ghost Warrior 3, but it seemed like quite a lot for the first couple of hours play. Even if the rest is in fact flawless, the port plainly suffers in other areas.

The graphics options have some pretty significant gaps in places that are now considered standards of customisation. Being unable to separately toggle things like Motion Blur is not really good enough in a game like this, nor is it particularly welcome to be stuck with a narrow FOV. It’s also a shame that fairly straightforward player requests from the February Beta period, like a toggle for ADS, haven’t been incorporated.

Overall performance has certainly improved since that Beta, but Sniper Ghost Warrior 3 still has problems with inconsistent frame-drops and stuttering, particularly when driving around the map. Combined with the sound loop bugs, hilarious initial loading times, and getting irretrievably stuck on world geometry, this doesn’t make a tremendous first impression. I’ve seen glimpses of promise from the more freeform sniping in this third entry, but on a technical level it’s satisfactory at best and, in most areas, disappointing.