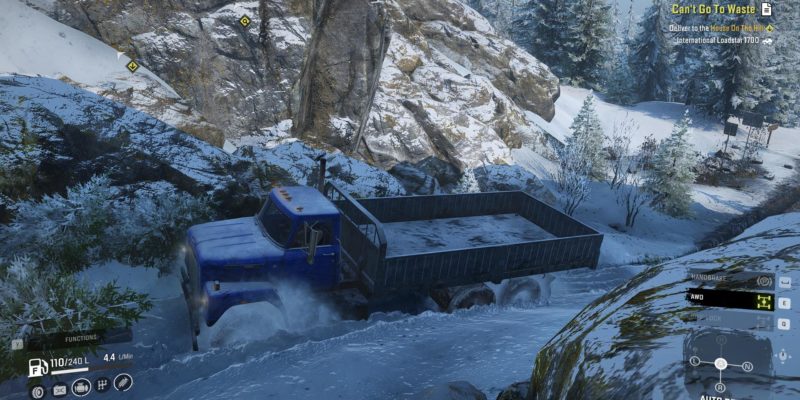 As the Spintires series has shown, some people like games where you get stuck in the mud and have to carefully navigate treacherous areas in huge trucks or risk giant problems. The first several hours I played SnowRunner, I was not one of those people. But after getting accustomed to the game and figuring out how everything worked, I too started to enjoy the thrill of driving very slowly while navigating natural hazards. It’s not for everybody, but for anyone with a penchant for methodical vehicular traversal and scrutinizing realistic terrain, there’s a lot to like here.

Not actually that snowy

SnowRunner is the follow-up to the similarly named MudRunner. The game takes place in Michigan, Alaska, and Taymyr, Russia, so there’s a lot of variety in maps and locations. Michigan and Alaska each have four zones that are connected, while Taymyr has three. The maps are all huge and detailed, with surprisingly memorable locations that you’ll end up learning as you play. In fact, the game has so much content that it’s almost stupid.

Each of the 11 maps in SnowRunner has watchtowers that you need to drive to so that you can unlock part of the map. But you don’t even need to go to these if you don’t want to, as the map fills in wherever you go. Finding the watchtowers does highlight the particulars that dot the map, such as the game’s many tasks, upgrades, trailers, and acquirable vehicles. The maps start with your needing to locate a garage that will allow you to fast travel, which will come in handy as you’ll end up warping your truck back when you get completely stuck. 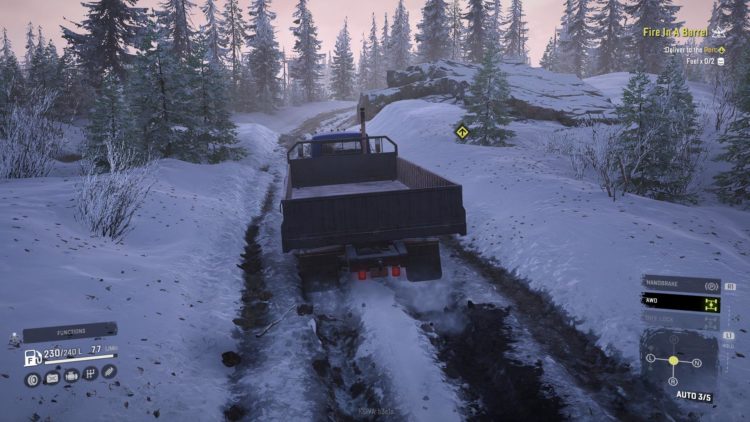 When you first start exploring a map, it’ll be fairly closed off. You’ll often have to navigate dangerous pathways that are slow-going. But there are bridges to fix and rockslides to clear, which open new pathways that allow you to get around faster. These count as tasks, as do any of the quests you can pick up out in the world. Many of these just want you to deliver materials to designated areas, but some will require you to collect a drowned truck or stuck trailer and bring it back to the owner.

SnowRunner‘s principal focus is on contracts, though. Each of the three overall areas has a list of these that you’ll need to complete in order, which then unlocks more. They typically have you go to pick up cargo at warehouses, mills, and farms and then deliver them. Contracts tend to have multiple such requirements. Successful completion of any contract or task rewards you with both money and experience. Collecting experience allows you to rank up, which grants you access to more purchasable trucks and customizable parts you can buy.

When SnowRunner begins, you only have a small pickup that can just be used for scouting around, but then you gain access to a highway truck capable of hauling cargo. Shortly afterward, you find your first garage and get a heavy-duty truck that you’ll be using for the early portion of the game. Any truck or part you purchase for cash can be sold back for exactly what you paid for it, making it painless to get new stuff whenever you see fit. 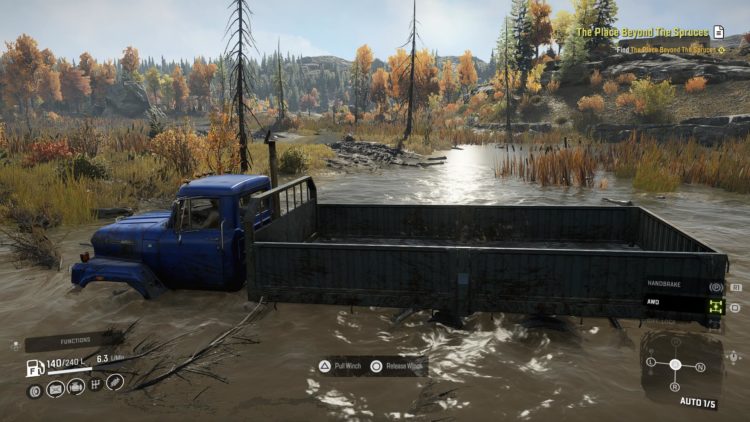 All of this builds to a compelling gameplay loop that consists of exploring maps, opening up connecting pathways, completing missions, and getting better trucks. It’s easy to dump hour after hour into the game. If you haven’t played the previous game in the series, though, don’t expect it to be quite the same as something like American Truck Simulator. Simply put, SnowRunner doesn’t mess around.

You can fast travel, but don’t take that to mean you can just hop around as you see fit. The garage in each map is the only place you can jump to. To get anywhere else, you’re going to have to drive. While you’re driving, you’re going to get stuck in the mud. Your truck is going to flip over. You’re going to fall into the water sometimes. You can be mere feet from your goal only to have to send your truck back to the garage because you couldn’t move or you ran out of gas.

You can also deploy another truck to pull you out or refuel you, however, but that’s only worth it in specific circumstances. You’re going to be relying on your truck’s winch an awful lot to try and avoid these. Every area has certain places you can shoot a hook on to and either try to drive the car towards it with your engine power or pull yourself with it. It feels satisfying to successfully get yourself out of a doomed situation and accomplish your goal, but it’s also painful to have to abandon your task when there isn’t anything to winch on to. 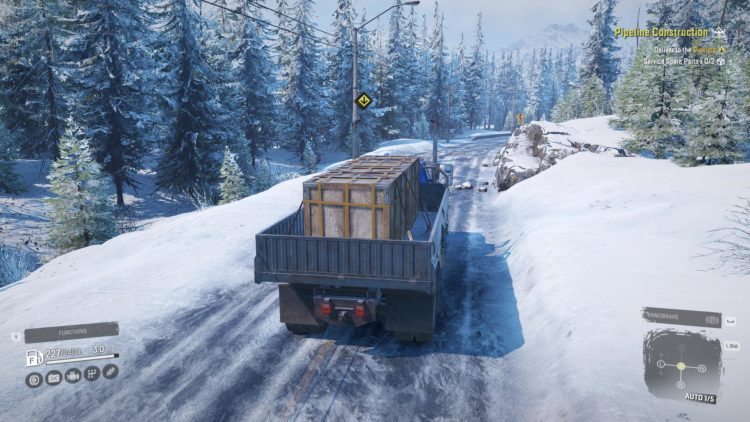 In that way, SnowRunner can be very frustrating and painfully slow. It takes a fair amount of patience to enjoy this game, but it’s undoubtedly well-made and ultimately consistently entertaining. Knowing that you’re always just an inch away from completely screwing yourself over is part of the game’s charm. It also makes the gameplay more involving and meaningful, as you’re not just accelerating in a straight line. Although, the trial-and-error nature can sometimes make you feel like you’re making little progress.

Stuck in the mud

There are other issues, too. There’s no minimap, so you’ll always have to open the entire map and carefully look for pathways on it. What’s more, opening the map doesn’t pause the game, so you’ll lose all of your momentum when you do so. Placing markers on the map also appears to be partially broken at the time of writing, as it just doesn’t work half the time. Often, it places a marker directly under your vehicle instead of where you tried to put it.

The way that your garage works and the way you take trucks out isn’t explained very well, either. Figuring it out felt needlessly difficult and kind of backward. You can send any truck to the garage, but you’ll need to retain them to move them to a different garage. You also need to manually take them out of the garage, and they’ll all stay right where they were on the map otherwise. It’s perfectly functional, but I feel that it lacks sophistication. 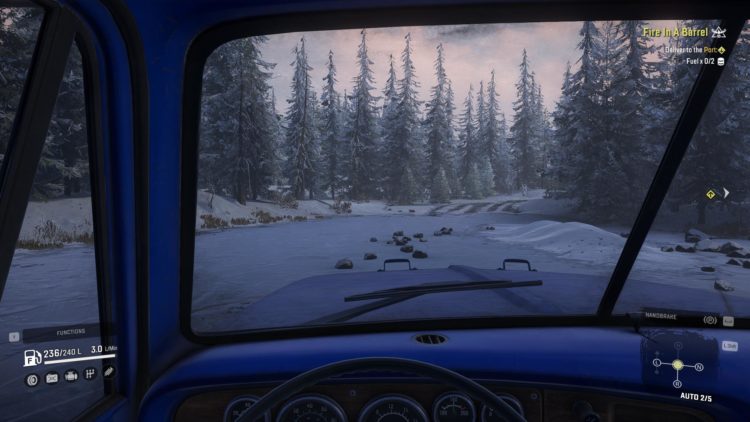 The driving itself is excellent, with logical physics. SnowRunner controls very well, and the turning, braking, and movement are all responsive and satisfying. The way the trucks bounce while traveling and the way the tires chew through the mud also feels believable. It’s certainly very faithful in regard to the profession it’s emulating.

It’s also a beautiful game: the foliage, the skyboxes, the way your tires displace the ground, the diesel smoke that erupts from the exhaust pipes. It’s a little weird that there aren’t any other drivers or people around, though. But I appreciate that choice, as SnowRunner would lose some of its lonely serenity otherwise.

I wasn’t expecting to be so engrossed by SnowRunner, but it’s an excellent game. It’s lovely to look at, has a lot of great mechanics, and features a massive amount of content. It can take hours to do everything on just a single map, and there are 11 of them. Anyone with a penchant for games about off-road trucks, cargo delivery, or braving a risky wilderness will likely find a lot to enjoy here. But people who don’t want to spend hours driving slowly through mud, snow, and babbling brooks or the types who like to avoid frustration should steer clear. I’m glad I gave it a fair shot, though, even if it did infuriate me at first. 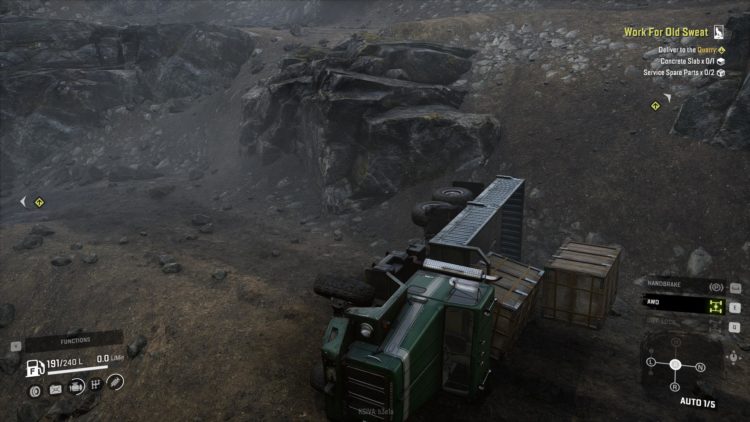 SnowRunner is an excellent game with wonderful visuals and great controls. It also has a massive amount of content for players to sink their teeth into. The game is slow and can be frustrating, but it's very much worth getting down and dirty with this one.