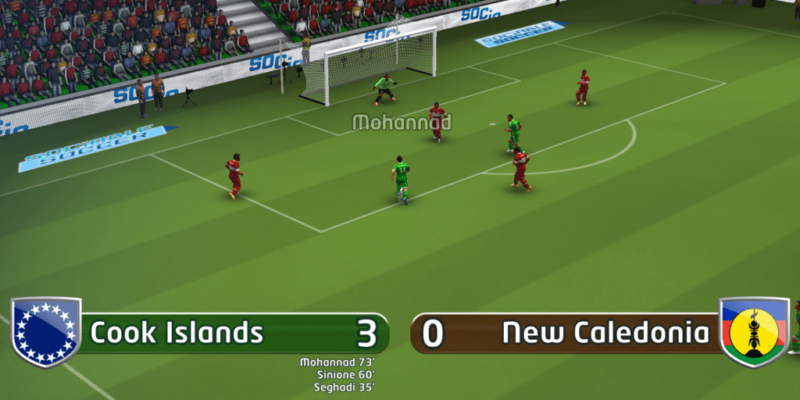 You tend to get a couple of archetypes in Early Access; the game that’s basically done but fancies a bit more beta testing, and the project that’s still implementing key features. Sociable Soccer is definitely further into the latter category, currently missing desirable aspects like online multiplayer and outright crucial things like competent AI opposition. It’s by no means a finished game, but there is the spine of a quality, arcade throwback football title here.

As the name suggests, Sociable Soccer is aiming to flood the nostalgia glands of anybody who grew up in the era when Sensible Soccer (or the more expansive Sensible World of Soccer) dominated the 16-bit football market. Sensible Software’s Jon Hare is involved, while development is being handled by new studio Combo Breaker. Judging by how this game is shaping up, I’m guessing most of them were also Sensi fans in some form or another.

If Hare’s contribution and the title weren’t big enough clues, the remixed version of SWOS’ famous “Goal Scoring Superstar Hero” immediately kicking in should do the trick. That, or the custom teams with a full set of players named after types of cheese. 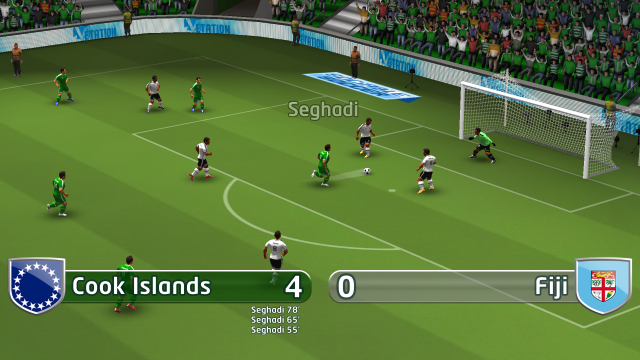 A quiet game for Seghadi.

Right now, you can play a variety of friendly matches (single player or local multiplayer) with domestic, national, or weird custom sides, and engage in some preset competitions. These are all subtly renamed (‘World Nations Cup’) so as to avoid legal difficulties, as are all the players in the game. Keep an eye on Brazil’s ‘Naymal’, he seems like a promising talent.

Like SWOS, the team selection runs pretty deep. You don’t get every single nation in the world represented (which, though it seems almost unbelievable looking back, is pretty much what SWOS managed back in 1994), but it will go as far as, say, Germany’s third division, or England’s National League. If you want Dover Athletic to line up against an Italian Serie B team, that’s no problem at all. Current data (or rather, the source from which the scrambled player names have been derived) does all seem to be from last year though, judging by the sides I’ve looked at so far.

Sociable Soccer also offers Boss Mode, which is a sort of sequential grind through a series of competitions. Starting as a hopeless Rookie, you have to win tournaments to earn in-game tokens to unlock further challenges. When the game gets more competent AI (more on that in a bit) and can do basic things like remember your formations between matches it’ll probably be a bit more engaging than it is at present. 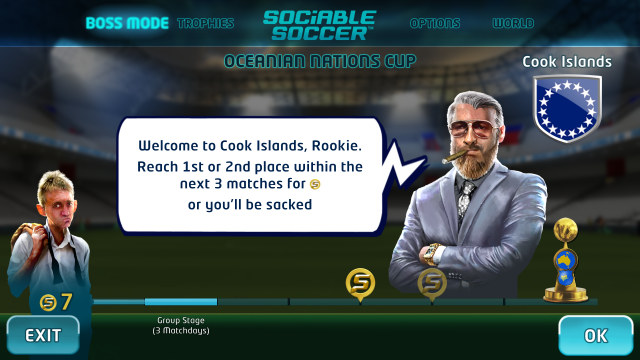 I won that cup and am now honorary King of the Cook Islands.

What really counts, though, is how Sociable Soccer plays. As someone who pumped hour upon hour into various incarnations of Sensi I wouldn’t say it’s quite ‘there’ yet, but it has a lot going for it and is clearly open to further tuning.

Oddly, the game defaults to a FIFA-ish side on 3D view. It’s easy enough to change this to a much more familiar top-down look though; something I suspect the vast majority of players will be doing. Combo Breaker aren’t going for a direct remaster of the traditional Sensible Soccer controls here (for starters the players have 360 degree movement rather than the old eight-way directional limits), but, as with everything else about this release, they are trying to evoke something rather similar.

Transition of play is very rapid, with short passes in particular zipping around like tiny missiles. Aftertouch is suitably absurd too. But while that results in some familiar Sensi-esque goals bent into the top corner from well outside the far post, it does introduce a slight problem. Because aftertouch can be applied so long after a shot (or just a long kick) is taken, and player movement is on the same gamepad stick, trying to move your next player closer to a long pass can also bend it away from him at the same time. 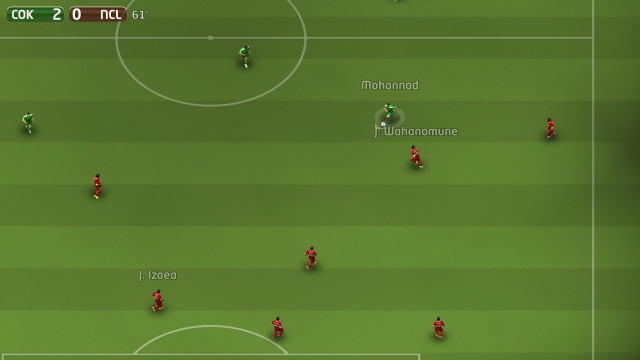 If you don’t immediately switch to this cam view I question your sanity.

Sociable Soccer also employs a multi-button control scheme which, aside from the Mega Drive version of Sensi, is a departure from the one-button-does-everything controls beloved by series fans. In general, I think this can work. Having short pass, shot, long hoof, and chipped ball is perhaps a bit of overkill, however.

I’m inclined to think an amalgamation of long ball/chipped pass could exist on the same button as the short pass (just hold it down longer). Or, let players just use the shot button if they want to do a longer pass with more power. Having the variety of short, long, and lofted balls in the game is great, but I think the control scheme execution could be handled with greater elegance.

There’s a sprint button too, whose utility I’m still undecided on. I think I’d like to withhold judgment on that until I get to try out a match against another human being. It’s just been limited to a short burst in a recent patch, so the developers aren’t quite sure how best to balance it yet either.

Sliding tackles might be in line for changes too. At the moment they remind me more of Speedball 2 shoulder-barges than Sensi slides. Not that this over-the-top approach seems especially out of place, but being able to fly into a player and dispossess them across what can feel like about half the width of the pitch is perhaps a bit too powerful. Again, I’d ideally like to play some proper multiplayer matches before making up my mind on that. 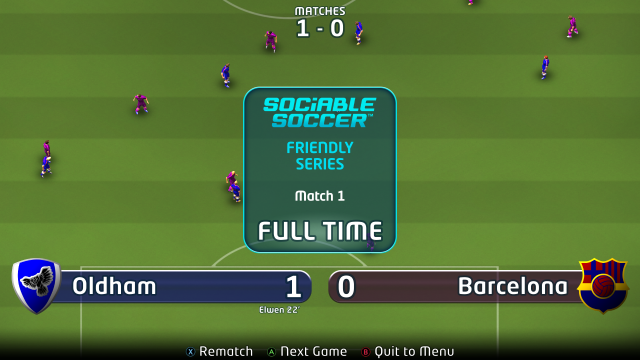 On current form, I can believe it.

The reason being, Sociable Soccer’s AI is really not good at the moment. It has managed to score against me a couple of times, but in general doesn’t pose much of a threat. AI goal kicks and throw-ins will routinely gift possession back to the player, goalkeepers are entertainingly hopeless (not automatically a problem for such an arcade title, but they should definitely be a bit more reactive), and it’s all too easy to stroll around the AI defenders without even using sprint. Opposing teams do sometimes demonstrate a frightening bit of ping-pong midfield passing, but it rarely goes anywhere and tends to end after three or four successive passes.

Plenty of work still to do, in other words. What matters now is the degree to which Sociable Soccer can transform this promising core into momentum and progress on other vital features. Getting online multiplayer up and running as soon as possible is going to be key. People need to be able to play this against one another (beyond local play) to test the limits of the gameplay against other decent Sensi players. ‘Sociable’ is right there in the name, after all.

With roughly the same urgency, the AI needs to be hammered into shape to provide a reasonable challenge. I probably shouldn’t be able to whip Barcelona as a lower league English team without even trying. Once those two things are properly in place, there’ll be a better sense of whether Sociable Soccer is really going places. At present it’s a young prospect showing promise; potentially headed for a glittering career, but statistically in danger of drifting into obscurity.

Sociable Soccer is out now on Steam Early Access.