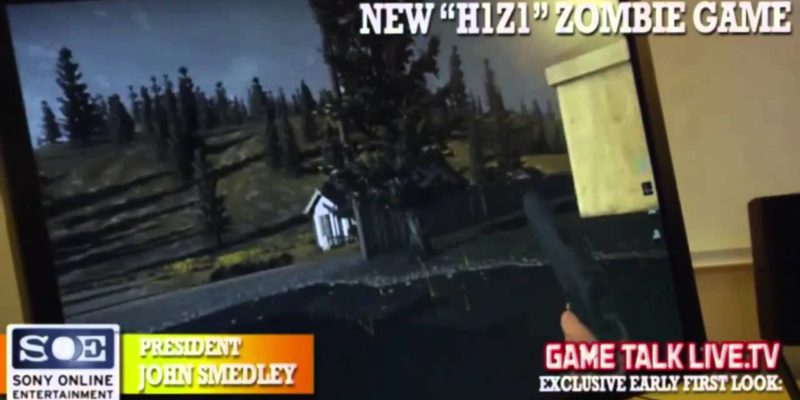 This evening SOE’s John Smedley revealed their new MMO H1Z1 which is a survival zombie apocalypse game. Players take on the role of a survivor in a world filled with zombies and other players but it won’t be like anything else on the market according to Smedley.

Back in January Smedley hinted that they were working on a new MMO that would appeal to Star Wars Galaxies fans and H1z1 has now been confirmed as that game. Originally called H1z1: Apocalypse, SOE has since dropped the Apocalypse from the name making it slightly more catchy.

Smedley stated that unlike other titles such as DayZ or Rust there will be a big focus on crafting and zombies will also have emergent AI which means each one will “think for themselves” offering a unique play experience.

Players will also respawn with their equipment when they die but that hasn’t been set in stone and it’s something players would either love or loathe depending on their expectations. We’re so used to being killed in DayZ and losing everything so it might feel a little odd to restart loaded with gear. SOE will probably turn to the community to find out what they want when testing gets underway in the future.

Instead having lots of smaller populated servers, H1Z1 will be a persistent world and players will have to hunt down useful items in order to survive, go it alone or group with others. The Walking Dead scenario was mentioned a few times although being stuck on a prison for months on end doesn’t exactly appeal.

There will be vehicles which will need fuel and players will have to find the fuel in order to use them which is just one example of how far SOE are going to take the survival aspect of the game. Bases and base building will also play an integral part in the game although there are no real details on that yet.

The game is not an FPS but Smedley said that it’s more a tactical combat game with FPS combat mechanics. The game can also be played in first person or third person and runs on a modified Planetside 2 engine.

The gameplay that was demoed was actually three months old and it looked a little rough but apparently it’s come a long way since the footage was taken for this demonstration (see video below).

The good news for gamers is that H1Z1 will be free to play and they stressed that it’s not pay to win. SOE will be releasing more information next week when they also plan on streaming the game. Smedley also pushed out a bit more information tonight in a lengthy post on their new Subreddit.

I wanted to tell you about an exciting new free-to-play game we’ve had under wraps here at SOE for some time. It’s called H1Z1. It’s a massively multiplayer game in which players fight for survival in a world where death is the only sure thing. The H1Z1 virus devastated mankind and left nothing but death and destruction in its wake and a world nearly empty of human life where the remnants of humanity are in a fight against extinction against those infected with the virus. It’s been 15 years since H1Z1 was first encountered and what’s left of the world before is overrun with the Infected. Humanity has been reduced to hiding in the shadows, searching desperately for food and water and anything that can help to survive even for another day. But the Infected aren’t the only dangers in the world. Everyday life in the Apocalypse means dealing with all kinds of wild animals and the brutality of other survivors, as well as finding your next meal and a safe place to sleep. It also means scavenging or crafting anything that can help you live just one more day. In H1Z1 every minute of every day is borrowed time and fearing for your life… unless you are the Danger (talking to you Walter), but life can and will go on… even in circumstances as dire as this. Humanity has not given in to the Infected. There are still pockets of humanity and the fight goes on!

Our vision for this game is very simple but ambitious. We are starting with what I would call “Middle America” – an “anywhere and everywhere” town. The world is massive as you’ve come to expect from our games. Over time we will grow the world until we have our own version of the U.S. after the death and destruction brought on during the H1Z1 epidemic. It will be our own version of America. We’ll have urban cities and desolate wide open places. All connected seamlessly. Our focus is building a sandbox style of gameplay where players can build shelters out of resources in the world. They can even work together to make amazing fortresses complete with weaponry to help defend against both the Infected and other players. Players also have access to a very deep crafting system that can let players make a huge variety of awesome stuff, including weapons (I made a 1911 the other day) and things like Molotov cocktails, explosives.. and other fun surprises.

I will also go right to the heart of the question a lot of players will have – “There are a lot of survival / Zombie games… how is this one going to be any different?”. First off, it’s a persistent MMO that can hold thousands of players on servers we host (yes there will be multiple servers with very different rule sets). Why is that a good thing? It means a thriving economy (oh yes… there’s trading). It also means you have potential allies in the all-out war on the Infected… and many an enemy as well. It uses our proprietary next-gen Forgelight engine and that means we’ve had a lot of really cool technology to work with to make the game we wanted to make. It’s also designed from the ground up for our players to become part of the design process. The Roadmap system that we built for PlanetSide 2 will be used extensively to clearly communicate what features we’re working on and what you can expect and when. You’re also going to be getting awesome access to our developers. We’ll be opening it up for Player Studio creations too so expect player-created items to make their way into the game. The main thing that differentiates H1Z1 from the other great games in the genre is the emphasis we are putting on player ownership and building. We want you to be able to form roving gangs that are headquartered out of an abandoned warehouse that you’ve taken over… or a house you’ve built from scratch after having cut trees down and secured the resources to make it. We are giving players the tools to make their own towns, camps and defenses, and they can decide how to set up their base (which is in the world btw… not instanced). We’re building in all the social features you’ve come to expect from an SOE game (grouping, proximity voice chat, voice chat for your gang, and many other cool social features).

To use a simple reference I’m sure everyone interested in this game will get… we want our players to make Woodbury from The Walking Dead if they want to. Or take over a prison. Or fix an old car so you and your friends (yeah we have multiplayer vehicles) can run zombies and players over mercilessly, and revel in the sheer delight of hearing a zombie scream as you light it on fire, or craft a gun to take down your friends and enemies alike. Our goal here is to provide emergent gameplay that will allow our players to make the world their own the way they want to. One of the best things about H1Z1 being an MMO is the fact that with a lot of people playing, we’re able to see all different kinds of gameplay. If you prefer a quiet life as a farmer raising crops… we’re going to make sure your zombie apocalypse fantasy is complete. If you’re like me and you want nothing more than to kill everything that moves, by all means see how that goes. It’s going to be a blast!

The footage of what was demoed this evening can be seen below as it was shown on Game Talk Live.

With DayZ still in development and a DayZ beta not expected until at least the end of this year, Bohemia might want to think about pushing harder with H1Z1 now on the horizon. It’s really difficult to tell what H1Z1 will actually be like based on the information revealed this evening but SOE has a solid foundation with the Planetside 2 engine and they’ve obviously been watching DayZ’s development closely. You can bet they’ll be pushing hard to catch that DayZ audience.

We’ll be sure to keep you posted on any further news on H1Z1 as it happens.