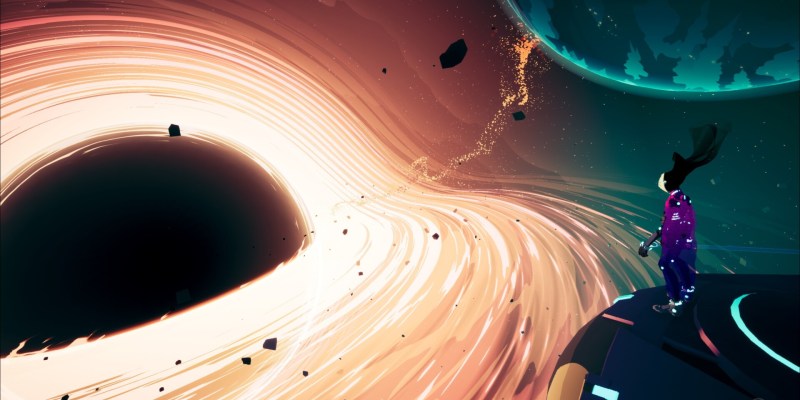 It’s easy to assume that Solar Ash is a sequel to Hyper Light Drifter. It’s got the same developer, it’s set in the same universe, and the main character also has an energy sword. But that’s mostly where the similarities end. Instead of focusing on action, the game is all about platforming, exploration, and dashing forward at high speeds. Some HLD fans will no doubt be disappointed by this, and the game could certainly have used a bit more depth and variety. But it’s still a compelling experience with an intriguing narrative and some worthwhile sights to see.

Solar Ash is the story of the unfortunately named Rei, which will no doubt generate some Star Wars jokes. Rei is a Voidrunner; a member of a group that dives into and explores voids. When her home world is threatened with destruction by the Ultravoid, she and her fellow Voidrunners go to place conduits on a nearby planet to activate a device known as the Starseed to keep the Ultravoid from leading their people to ruin. But the other Voidrunners have gone silent, and the Starseed hasn’t been activated. It’s up to Rei to find out what’s going on and do her best to save her people from oblivion.

Unlike Hyper Light Drifter, which mostly told its story through its visuals alone, Solar Ash has multiple characters and plenty of voice acting. There are side characters with their own story arcs that you can see through by exploring the world. Each of the game’s areas has stashes left behind by the other Voidrunners with five or six voice logs, telling a bit of their stories, and giving you a feel for their character. The world feels lived-in, and the story elements are all organic. Visually, though, I’d say the game has less of an identity than its predecessor, as it looks similar to other atmospheric exploration indies. 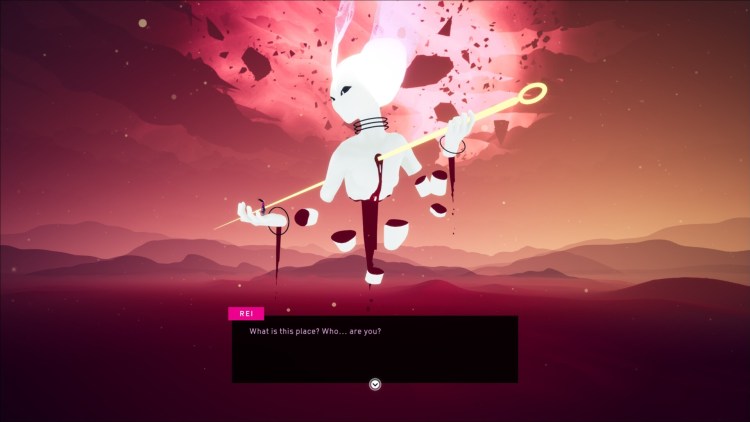 Do the thing several times

Speaking of other atmospheric exploration indies, Solar Ash is almost astoundingly reminiscent of The Pathless in a lot of ways, which was released last year by the same publisher, Annapurna Interactive. The game looks like it, Rei moves similarly to that game’s protagonist, and the games have remarkably similar structures resembling a bite-sized Breath of the Wild. Just like The Pathless, Solar Ash is divided into multiple areas that are all interconnected. You then need to complete several repeating objectives to fight a big boss and move on.

Specifically, Rei has to destroy anomalies. Each of Solar Ash‘s six areas (one tutorial, and five that are full-length) allows you to scan for these anomalies, so you just need to approach and destroy them. Once they’re all disposed of, a Remnant — a giant monster — must be fought. Then you return to the area’s conduit (which Rei can freely warp too once she locates it) and reactivate the AI assisting her now that its signal isn’t being blocked. This allows the conduit to power the Starseed.

Due to the above, each area can be repetitious. You enter, find the conduit, scan for the anomalies, knock ’em out, and then take on the boss. But while The Pathless had tons of different puzzles and goodies to seek out while exploring the areas, Solar Ash just has the Voidrunner stashes and side stories. There’s often not a whole lot to see, even if the world design is quite good. And The Pathless let you look around the world to easily spot points of interest in the distance, while Solar Ash mostly requires you to wander until you find things, at least until you get the Voidrunner suit that lets Rei scan for stashes. 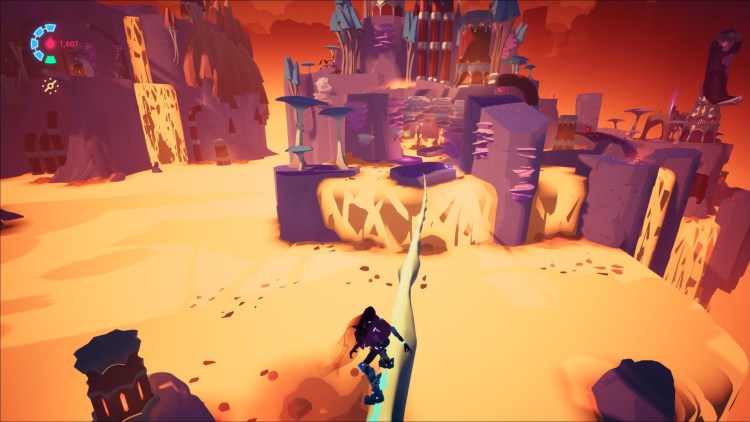 Take me as I am

Rei moves about the world by skating forward and boosting. She can double jump and grind on rails. The movement and controls in Solar Ash are satisfying and fluid, with platforming that feels tightly integrated and organic. Playing the game is a joy. Rei also has a three-hit sword slash, but this isn’t a combat game. There’s a variety of enemies, but they’re typically not all that threatening and they fall quickly. While I get that Voidrunners aren’t fighters, this left me a bit underwhelmed, as combat was the lynchpin of Hyper Light Drifter.

You still need to hit a lot of things, but that’s because the anomalies and Remnants all require Rei to hit needles in order to fight them. Anomalies are stuck in place, so it’s often a bit of a simple puzzle to find out how to best hit all the needles. Once you hit the first needle, a time limit kicks in and you need to hit the next before this ends, otherwise the needle will vanish and any black goop attached will turn red, damaging Rei and forcing her to respawn.

For Remnants, they’re giant beasts walking around and you need to find the first needle. Once you do, Rei attaches to them and has to basically do the same thing she did with the anomalies. That is, except for the fact that Remnants have three weak points, requiring you to basically go through three sections where you skate along their body to hit all the needles and defeat them. It’s a lot like Shadow of the Colossus, but much simpler and less intimidating. The third section has all of the black goop on them turn red, so if you fall off of their white armor pieces, Rei will respawn on the ground and you’ll have to start that weak point section again. 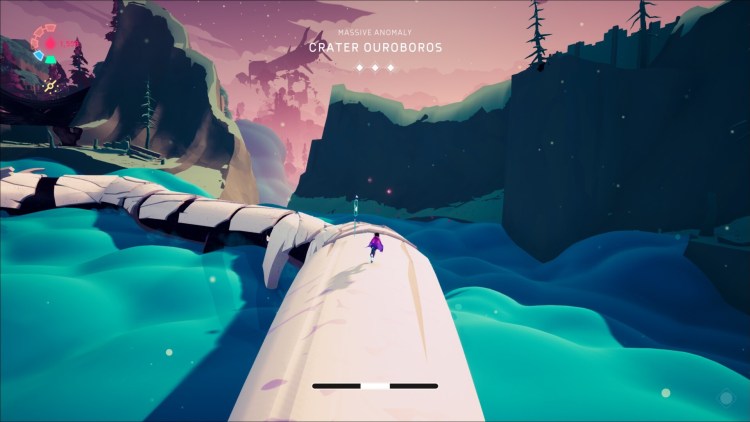 Solar Ash isn’t difficult by any means. Hitting needles within the time limit can be aggravating as the time is quite tight, but it mostly works well. The camera can present an issue some of the time, though. While skating on a Remnant, sometimes the camera simply won’t let you see that you’re doing, potentially leading to failure. After hitting a needle, it also isn’t always super clear where the next one will be. It can take some trial and error to figure out exactly where you need to go.

Rei has an ability that lets her slow down time and grapple to an enemy. She can also grapple to specific needles with grapple points affixed to them, but she can’t grapple to normal needles. What feels a bit weird is that Solar Ash doesn’t have upgrades. Rei is pretty much the same in the beginning as she is at the end. She doesn’t learn more moves or anything, so new gameplay elements are purely environmental. But there aren’t many of them, making Solar Ash‘s progression feel a bit staid.

There are a couple of things similar to progression, though. You’ll find red bits of plasma around the areas, as well as in boxes and crystals. This lets you purchase new shield cores, which let Rei take one more hit. But she loses the highest one you’ve purchased to an arbitrary game mechanic after beating each Remnant. I must have repurchased that final shield core three times. Finding all the Voidrunner stashes in an area also unlocks a new suit with a single ability, but I only found one of these to be legitimately useful — it reduces the cooldown of Rei’s boost. Others are only occasionally worthwhile. One increases Rei’s attack power, which is pretty useless since everything dies so quickly. 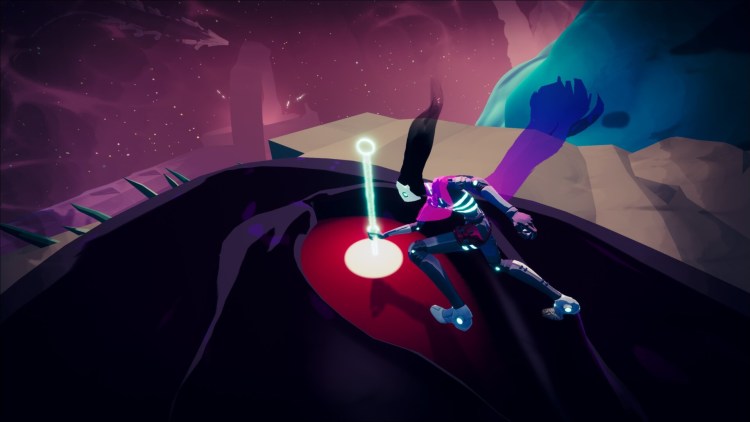 Overall, I enjoyed Solar Ash. It plays well and I found the world intriguing, plus I really appreciated the story in the end. It’ll take most players six or seven hours, especially if you don’t spend time looking around. Even then, completing the side stories doesn’t get you anything other than lore. Still, the game doesn’t have as much of its own identity as I thought it would, and the almost complete lack of any character progression made the loop feel slighter than I would have liked. I’m still glad I won’t have to skate around on yet another Remnant, though. I’ve done enough of that for a lifetime.

An endearing experience with a well-integrated narrative, Solar Ash trades the action of its predecessor for speed-based platforming. It's a compelling play, but it feels a little light.