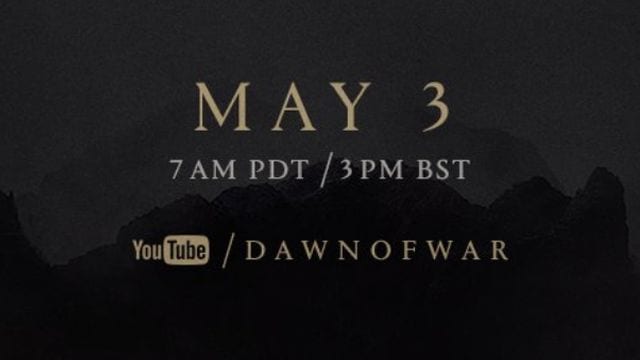 In an unprecedented move for the videogames industry, Relic have pre-announced a forthcoming announcement for Dawn of War. Yes, all signs point towards the fact that a thing relating to the Dawn of War series will indeed be happening on 3 May.

It’s scheduled for the third of May, so it could be the third in the series; if that’s not getting a little too close to looking for Half-Life 3 clues. May is the fifth month, so maybe they’re skipping two entries and just making Dawn of War 5. Probably not though.

Relic have still been putting out DLC for the second game, so the most disappointing answer would obviously be more of that. Hopefully they wouldn’t pre-announce such a thing, but all bets are off after Namco Bandai called the announcement of some rubbish t-shirts “big Dark Souls news”.

In short, Dawn of War 3 might be announced soon. Perhaps. 7am (Pacific US) on 3 May is when we’ll know what this actually is.

Update: It actually was Dawn of War 3. Hooray.