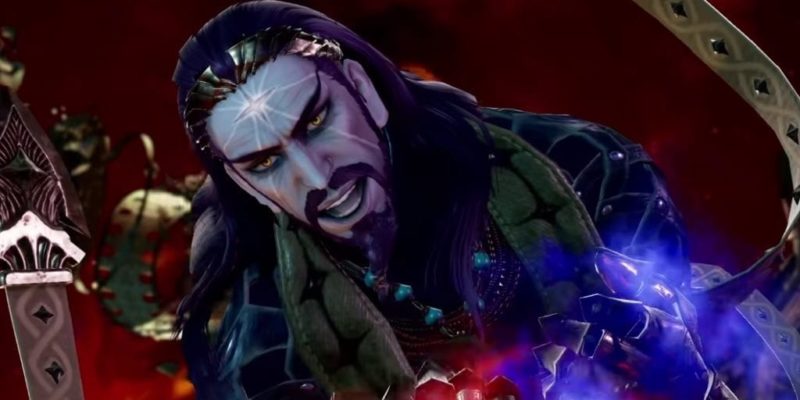 We’re pretty sure we weren’t the only people thinking the same thing, right? The latest reveal for the Soulcalibur VI roster isn’t a returning character. It’s actually someone completely new. The man’s name is Azwel, but we do think of him as Zhang Jiao from Dynasty Warriors. You’ll probably notice the resemblance after watching the reveal trailer below.

That’s our new character — Azwel — a mystic who considers himself “The Leader of Humanity.” The moniker’s probably more self-styled than an actual belief system with a handful of followers.

According to developers Bandai Namco, Azwel uses The Palindrome — an astral device that allows him to create weapons out of thin air. As you can see, he can manifest an assortment of spectral blades, axes, and spears. This arsenal makes him look troublesome and unpredictable.

The trailer also notes that his fighting style is the “Practical Application of Martial Philosophy and Theory.” We did try to spell it in reverse, like a palindrome, but all we got was gibberish. Let’s just call it “magic.”

We’re looking forward to how the new guy, Azwel — the Zhang Jiao of Soulcalibur VI — meshes with the rest of the combatants. In terms of sheer insanity and zaniness, he’s got them down pat. From the looks of it, he’s going to give the returning Tira a run for her money.

Still, whether Azwel is serving Algol or the human race does not matter. After all, none shall defeat the Yellow Turbans! See, he does have a resemblance with Zhang Jiao. Maybe it’s the character’s design, his over-the-top lines, or the voice acting?

Check out the full world map for Assassin’s Creed: Odyssey