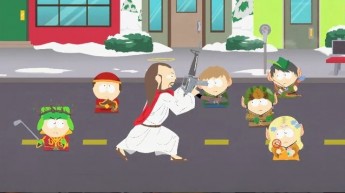 Goin' down to South Park

The first trailer for Obsidian’s South Park RPG has been shown at Microsoft’s E3 press event, revealing that the game is now called South Park The Stick of Truth and that one of the main goals in your role as ‘the new kid’ is to be cool (what else?) You can expect the usual assortment of South Park characters and villains (from underpants gnomes to .. goblins) as well as Jesus wielding automatic weapons.

Trey Parker and Matt Stone appeared on stage to explain that for the first time ever they’ve had to actually consider the proper layout for the town of South Park and where (say) Kyle’s house is in relation to anything else.

Xbox 360 will have a timed exclusive of the first three DLC packs for the game, which are billed as ‘standalone adventures’. It’s also been revealed that Kinect voice commands will work with the game, so calling Cartman a fat-ass will have some sort of effect (as will taunting your enemies).

Microsoft’s console also gets an exclusive pre-order pack (Mysterion Superhero), complete with Mysterion outfit for your character and special attacks.

Everyone else (PC, PS3) has access to a Good Times With Weapons pre-order pack, featuring a Samurai outfit, ‘Cartman’s Kick-Ass Sai’ and the ‘Bulrog Chicken Attack’ (sounds dangerous).

360 getting timed-exclusive DLC for Resident Evil 6