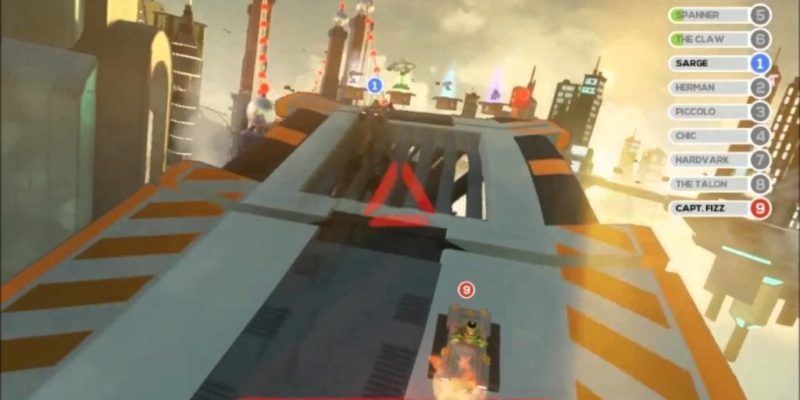 There’s something about the kart racing genre that continues to draw me in. While games like Split Second and Need for Speed offer arcade style racing mixed with hints of realism, the lack of seriousness that a cartoon racer in a tiny kart offers is welcomed in my house any day of the week.

Retro titles, such as Rock n’ Roll Racing, bring me back to my younger years in gaming.  This is one reason that Mario Kart continues to build new generations of racers, while tapping into its reservoir of fans from previous entries. The nostalgia factor and whimsical gameplay continue to draw in fans of the genre, often trying others that attempt to compete. With that being said, it can be really tough to play a racing game that is cartoon in nature and not compare it to Mario Kart. The toon-racer took first-party Nintendo characters and propelled the genre to what it is today. But, there’s more out there than just Super Mario and his buddies.

Space Dust Racers is currently being developed by Space Dust Studios, an indie team from Melbourne, Australia. Our first hands-on with the game was at the Game Developers Conference (GDC) in San Francisco, Calif. earlier this year. Since then, the team released a preview of the racer, segueing into the Kickstarter campaign that recently went live. The same build that was played for this article closely modeled what was available for hands-on during the show.

It was easy to see the competitive nature the game was already driving amongst others playing alongside me. Many were already having slight cases of road rage while being blitzed by rocket fire and trash talk on the busy show floor. But, there was something about the racer that offered bursts of laughter and tension for a few seconds at time.

Space Dust Racers masks itself as cooperative kart racer. However, this descriptioncouldn’t be further from the truth.The game is more along the lines of a party game where you collect power-ups in order to knock your opponent off of a platform. That platform just happens to be a raceway, broken into quarter lap sprints. The winner of these sprints is the one who can lead the pack of racers and avoid the barrage of oil spills, flames, and the occasional pelting of machine gun fire.

Much of the time, you are trying to aim weapons and commandeer your vehicle. It might seem as easy as walking and chewing bubble gum, but the loose controls and game modifiers are there to disrupt any chance you have at simply racing. Things like the “Pinball” modifier make everyone bounce off one another while the clanks-and-clinks of a pinball machine accompany impact. The extra physics also throw other players around the track, often leading to a bump over the edge or into cross-traffic.

Usually in these types of racing games, power-ups are saved to exploit anyone attempting to run clean race and place first. But, the dynamics are changed when these quarrels are in tight raceways and there really isn’t lap count. The power-ups, such as the Shock Shield, can flip enemies off of the track with a single blast of electric pulse. Others, like the Turret Gun, can go full auto, often causing opponents to explode from the relentless fire. In essence, this is what you can expect in the gameplay department. If Mario Kart was the comical spawn of Grand Turismo, then Space Dust Racersis one step further in the dissection.

Rain is just one of the many modifiers/effects you will see in-game.

If the mayhem caused by drivers wasn’t enough, there are many other obstructions that can rain on your victory parade. Environmental conditions such as blistering winds, icy roads, and Mother Nature spewing rainfall are a few things you must endure. These made complete sense as the sprints aren’t necessarily races per se. Other games that have a focused Grand Prix or timed trials create obstacles to slow you down with ending your race or lap with the best time possible. With Space Dust Racers, the goal is to obstruct your enemy, so the weather comes as yet another bullet to dodge, prohibiting you from making it out at the forefront of your class.

You might be asking yourself, ” Well, if there are not any races, how do you win?” The goal is to be the last per…ani…alien standing. When the lap starts you can bump others to gain the lead. Then, it is up to you to hold it. Once you’ve become the last racer standing, the sprint will end and another round will begin. The timing of these sprints is pretty spot-on, considering you are waiting for the action to start again. One thing that could be heavily tweaked is to find the sweet spot in which players start to fall behind the leaders. It isn’t quite long enough as the camera pans out, leaving your character to fall behind while still having a fighting chance for competition.

Space Dust Racers has a lot of potential. The game is looking to get Greenlit on Steam,opening up a ton of others to partake in the condensed quarrels. The game has future plans for the Xbox One and PlayStation 4, which should ease worries of playing a party game with friends that only game on console.

The game showcases its short lived bouts, which are perfect for those who don’t have time to run through a Grand Prix or other longer story modes. The game is built around this mechanic and executes it almost perfect. It would be nice for times that you are trailing the leader to be reduced, furthering tense moments. The tension is often broken by the perfect weapon usage, something the game seems to balance quite nicely. The steering and drifting are fairly loose, but this could also receive further tweaking.

Characters were created to fit into the realm of Space Dust Racers, each having a quirky attribute to them. Each has something likeable about them, something you don’t find often when new IP for racing games is introduced.

If you are going into the game expecting a heavy emphasis on racing or timed trials, you will be disappointed. Instead, go in knowing that there is a party waiting to happen that’s full of ice slicks and explosions.

Disclaimer: This game is currently enrolled in the development process. While it wouldn’t be fair to give the game a complete score, we will do our best to offer a current critique for the current build at this time.